For the second time in a little over a year, the Office of the Wet’suwet’en is asking why it wasn’t immediately notified after 1,000 litres of contaminants were spilled on the nation’s traditional territory at a Coastal GasLink pipeline work camp.

Mike Ridsdale, environmental assessment co-ordinator with the office that represents the Wet’suwet’en hereditary chiefs, said he learned about the spills — which occurred earlier in the week — Friday morning when he got a call from the province’s Ministry of Environment.

“The Oil and Gas Commission never informed us at all. They’re supposed to be working with us,” Ridsdale said. “For them to let me know two to three days later is not being right on the ball. Even on the report, it said that the Wet’suwet’en were notified. I have no messages and no emails.”

In May 2020, two diesel spills occurred on Wet’suwet’en territory. The first spill happened May 19 at a remote RCMP detachment established a year earlier to patrol the area following conflict over the 670-kilometre natural gas pipeline under construction between northeast B.C. and Kitimat.

The second spill occurred in late May at 9A Lodge, a work camp for Coastal GasLink about 70 kilometres from the RCMP detachment. It was reported to the Office of the Wet’suwet’en several days later, according to hereditary leadership. The two spills were each estimated at 500 litres.

The most recent spills occurred on Tuesday and Wednesday last week at the same site, according to details sent to the Office of the Wet’suwet’en by Coastal GasLink on Friday afternoon after the nation had contacted the BC Oil and Gas Commission for details.

The first occurred when a generator released an estimated 40 to 50 litres of diesel into a surrounding containment berm, which then leaked an unknown amount of fuel onto the ground.

The following day at the same work camp, 940 litres of diesel exhaust fluid was spilled while being moved by a telescopic lift truck, also known as a zoom boom.

“While placing 1,000-litre diesel exhaust fluid tote inside a sea can, the zoom boom pushed on the tote to ensure it was fully inside and that the door of sea can would close,” according to a BC Oil and Gas Commission incident report. “A piece of the tote frame buckled as a result and punctured the bottom of the tote, resulting in all the volume of the tote spilling.”

In an email, a spokesperson for Coastal GasLink said workers noticed the spills and took immediate action to clean up the fuel by using clean-up materials available on site, including scraping off affected ground material.

After the diesel spill, “measures were taken to ensure that no more fuel was spilled, including shutting down the generator, booms and absorbents deployed inside the containment berm to remove liquid,” the company said, adding that an environmental company was sent to test for any migration of the contaminants.

“Coastal GasLink notified the Office of the Wet’suwet’en once we had been notified by our contractor and had been made aware of the steps that had been taken.”

On Monday, Ridsdale said work to remediate the generator spill was halted after an excavator digging up contaminated materials hit groundwater. The second spill was still being remediated, he said.

Ridsdale said he passed notification onto Fisheries and Oceans Canada, because the spill took place within 300 metres of Gosnell Creek, a fish-bearing stream that contains cutthroat trout, Dolly Varden trout, coho salmon and bull trout, which are a species at risk in B.C.

“It’s not that far away,” Ridsdale said. “If it’s a gravel surface, then it’ll percolate right through the ground.”

According to a Dangerous Goods Incident Report from Emergency Management BC, the diesel exhaust fluid spill occurred on a gravel pad, which was then scraped and placed in bins for disposal. Pads were also put down to absorb the liquid, it said.

Last year’s two previous spills resulted in 2,351 tonnes of contaminated soil and gravel being trucked about 100 kilometres to Knockholt Landfill near Houston. The site is within a kilometre of the Bulkley River, which drains into the same watershed as Gosnell Creek.

At the time, the Office of the Wet’suwet’en expressed concern that the materials were not being moved to a facility north of Fort St. John designed to take hazardous waste. A representative from the regional district said contamination levels were not considered hazardous under B.C.’s Hazardous Waste Regulations. 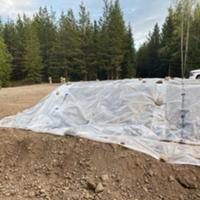 In an email to The Tyee, the BC Oil and Gas Commission said it is still working with Coastal GasLink to determine where contaminated soils from the recent spills will be taken for disposal.

“We understand both spills were contained to the camp’s site,” it said. “However, in the case of the diesel incident, an environmental assessment is being done to confirm that is the case.”

It added that diesel exhaust fluid, a non-flammable liquid used to reduce emissions from diesel engines, is not toxic.

According to a safety alert issued by the BC Forest Safety Council, it is an eye and skin irritant that should be used within well-ventilated areas while wearing PPE, such as safety glasses and gloves.

In the case of a spill, it should be prevented from entering “waterways, sewers, basements or confined areas,” the alert says.

“Small spills may be absorbed with non-reactive absorbent and placed in suitable, covered, labelled containers. Prevent large spills from entering sewers or waterways,” the notice says.