Over the past few months, headlines and studies from various parts of the world have been sounding the alarm about a new strain of COVID-19.

Studies from the U.K. have found that the B16172 strain, originally detected in India and now known as the Delta variant, is more easily transmissible than others, leads to higher levels of hospitalizations, and could be more resistant to vaccines than other strains.

The variant was first detected in British Columbia in late April but, unlike in other parts of the world, failed to overtake the other two variants of concern vying for prevalence here: the Alpha (B117) and the Gamma (P1). The latest data available from the BC Centre for Disease Control show that variants of concern make up about 90 per cent of all cases in the province, with the Alpha and Gamma variants taking the lead at 44 per cent and 40 per cent respectively.

The most recent report published by the BC COVID-19 Modelling Group — an independent interdisciplinary group that includes infectious disease modellers, math profs and physics profs, among others — found that the proportion of Delta variant cases in B.C. have remained roughly constant since it was first detected here.

But the amount and the type of data the province has released publicly on these variants has been inconsistent and less than forthcoming. According to Dr. Sarah Otto, a professor of evolutionary biology at the University of British Columbia, until very recently B.C. was not uploading whole genome sequencing data to a shared global database that is being used by dozens of jurisdictions to help researchers analyze the latest developments in the pandemic.

“Right around when Delta was spreading in numbers, the province kind of changed how they were counting things,” said Otto. “All of our models suggest that Delta should have been increasing… and all of a sudden, with the change in accounting, all of them went down.”

Otto says it’s difficult to know exactly when or how provincial health authorities changed the way they count variants of concern. Their guess is that the BCCDC may have been categorizing the variants in a different way, based on the genotyping test used to identify them. A switch to whole genome sequencing in late May or early June means they could be counted in a slightly different way.

In addition to the discrepancies caused by these changes, B.C. only reveals variants of concern data once a week, unlike places like Alberta where this information is shared every day. The resulting lack of raw, comparable data has made it difficult for Otto to learn about how Delta behaves in our population.

Instead, Otto and their team of independent experts are relying on data from other jurisdictions — like Alberta, Ontario, the U.S. and the U.K. — to learn about how this new strain behaves.

What we know so far

Most of what is known about the Delta variant so far comes from data collected in the U.K., where the variant has spread rapidly enough to overtake all other strains and delay the removal of lockdown restrictions.

It’s important to note, Otto said, that the spike in Delta variant cases in the U.K. did not result from continuing travel between the U.K. and India — rather, the increase in Delta cases was found week after week, indicating high transmission within the country.

“What we’re basically saying is compared to the disease we were dealing with last year, the Alpha [variant] increased transmission 50 to 100 per cent, and now Delta is increasing it another 50 to 100 per cent,” said Otto. “Delta has also been estimated to lead to twice the rate of hospitalization and 45 per cent more emergency room entries.”

Data from jurisdictions like Ontario and Alberta show that Delta is spreading five to 10 per cent faster per day than the Alpha variant.

A new study from the U.K. also found that Delta appeared to be spreading faster among children and young people than in older populations. Prevalence of this variant was found to be five times higher among children aged five to 12 and adults aged 18 to 24 than in people older than 65.

In early June, data from England and Scotland showed that the risk of hospitalization was 2.61 times higher with the Delta variant than it was with Alpha.

Finally, the results of an early study released in May found that while the Pfizer and AstraZeneca vaccines are effective against the Delta variant after two doses, they are both only 33 per cent effective after one dose — compared to a one-dose efficacy rate of 50 per cent against the Alpha variant.

This finding has led to concerns that B.C.’s reopening plan, which relies on high percentages of the population receiving one dose of the vaccine in order to move forward, would give the Delta variant room to spread.

But vaccine efficacy varies over time, and newer studies show that one shot could still be enough to keep a Delta variant patient away from the hospital.

The role of vaccines

Among the excess of studies and data being published about the Delta variant in recent weeks lies a not-yet-peer-reviewed study out of the U.K. that offers hope.

According to this study, those who have received one dose of Pfizer or AstraZeneca vaccine are about 75 per cent less likely to experience severe symptoms of the virus if they contract the Delta variant.

“That just means if you get COVID,” Otto explained, “your chance of going to the hospital is just that much lower.” 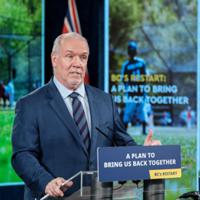 BC Enters Next Stage of Eased COVID Restrictions

Otto added a second piece of good news: seven days after receiving a second dose of an mRNA vaccine — Pfizer or Moderna — its efficacy against the Delta variant shoots up to 88 per cent. While two doses of AstraZeneca are a little less effective, at 60 per cent, the aforementioned preprint study found that 92 per cent of people who had had a full regimen of this vaccine did not need to be hospitalized.

In B.C., over three-quarters of the population above the age of 12 has had at least one dose of vaccine, and second doses are beginning to ramp up.

The question of what vaccine efficacy means is one that Otto and their team focused on in their latest modelling report.

“If you were vaccinated and going around and doing the same activities as somebody who’s unvaccinated, then if the vaccine is 80 per cent effective, that means you’ve only got one-fifth of a chance of getting COVID as the person that you’re walking around with,” said Otto.

“You can undo the benefits that vaccines provide by being too risky — meaning having way too many people in your house while cases are around, burning your mask, whatever it is.” 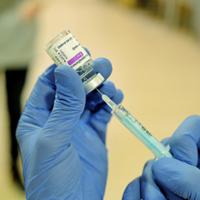 ‘Don’t Overthink It’: A Guide to Getting Your Second Dose

As we inch closer to the third step of the province’s reopening plan on July 1, experts say a strong vaccination rollout and a population that adheres to the rules still in place are key to keeping Delta at bay.

Between May 17 and 29, one-quarter of the population aged 18 to 29 received their first vaccinations. If this trend keeps up, Otto said, the province will be well armed against the variant.

Other indicators that B.C. is in a good position include the fact that there was no marked increase in transmission rates after the first set of restrictions were lifted in late May, during stage one of B.C.’s reopening plan.

“I think it is not overly worrisome because, honestly, our vaccination levels are so high that it really is providing quite a bit of protection,” Otto said.

“I would say cautious and not worried is what we should be.”