It took only hours for federal and provincial politicians to shoot down recommendations from a Canada-B.C. expert panel on housing affordability that would reduce tax breaks and government subsidies that benefit homeowners over renters.

There were 23 recommendations in the report, and politicians in Ottawa and Victoria immediately rejected the two aimed at reducing the inequality between owners and renters.

“I’m hoping the decision-makers at all levels... will take the report home and read it at their leisure,” said Joy MacPhail, the former NDP MLA who chaired the joint Canada-British Columbia expert panel on the future of housing supply and affordability. “We hope that it provokes discussion. Clearly it already is.”

By the time MacPhail spoke with The Tyee that afternoon, federal Finance Minister Chrystia Freeland and B.C. Finance Minister Selina Robinson had already ruled out acting on two of the main recommendations.

One called for “reviewing the impact of the capital gains tax exemption on principal residences.” Under current federal policy, someone who buys a home and sees its value rise over years or decades isn’t taxed on the gain in value.

It’s a policy that MacPhail said costs the federal government in the order of $7 billion a year in foregone revenue and that attracts investment away from other areas of the economy where gains are taxed.

The other controversial recommendation was that “the B.C. government phase out the Home Owner Grant” applied against municipal property taxes and use the money saved to fund social housing and other commitments in the government’s housing plan.

The grant program provides homeowners in the Capital Regional District and Metro Vancouver and Fraser Valley regional districts with $570, and owners in the rest of the province $770. Owners of homes assessed at up to $1.625 million are eligible for the full amount.

The grant, which others have argued it’s time to scrap, costs the province almost $1 billion a year.

The panel presented both recommendations as a way to make the housing market more fair for renters, a group whose net worth is on average much lower than that of homeowners.

“High levels of homeownership amid steadily rising prices have contributed to a stratification of housing tenure based on income,” the report found. “This stratification sharpens wealth inequality between renters and owners, as housing values have risen dramatically over time and homeownership has become an increasingly important means of wealth building for many households.”

The authors recognized, however, that many owners would likely oppose the proposed changes, and that they have much greater political clout than renters do.

“Elected officials may be reluctant to take actions to significantly boost the supply and affordability of housing or change tax policies that favour incumbent homeowners because of the potential political backlash,” they wrote. “This, in turn, is exacerbating housing shortages and the inequalities they accentuate.”

“We will examine this report released today,” said a statement from Freeland, “though our government has been clear that we are not considering a capital gains tax on principal residences.”

Freeland also serves as deputy prime minister to Justin Trudeau. Before entering politics, she was a news reporter and wrote a book about growing economic inequality, Plutocrats: The Rise of the New Global Super-Rich and the Fall of Everyone Else.

In B.C., Finance Minister Selina Robinson responded to questions about the report from BC Liberal Party MLAs in the legislature saying, “we are not interested in making any changes to the Home Owner Grant. I have said that before, and I am saying that again today.”

MacPhail said the panel was unanimous in support of all of the recommendations included in the report, and that they should be taken together. “We designed them to be taken as a holistic approach,” she said, adding that adopting them would make a difference.

Other recommendations from the panel are aimed at adopting a planning framework that encourages housing, reforming fees on property development, expanding the supply of community and affordable housing, and improving co-ordination among and within all levels of government.

As an alternative to making tax changes affecting owners, the panel suggested providing renters with tax savings “to help offset the favourable tax treatment of ownership.” Measures might include allowing tax deductions or credits for rent paid or giving renters higher limits on what they can contribute each year to a tax-free savings account. 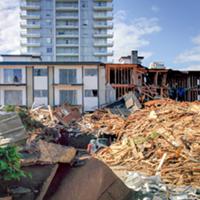 MacPhail was not surprised by the initial reaction from politicians. Throughout the process, the panel had kept them informed about where they were headed and had received indications they would oppose some of the recommendations.

“The solutions are not easy,” MacPhail said, adding that the need will grow with Metro Vancouver projected to add a million more people by 2040 and housing shortages in all of the province’s population centres. “The problem is going to get worse before it gets better. It’s been decades in the making.”

Making things fairer for renters is one of the solutions, and politicians need to give the idea more careful consideration, she said.

“When 35 per cent, at a minimum, of people who live and work and play and pay taxes in British Columbia simply don’t have this tax advantage from either level of government, we say level the playing field.”