An analysis of the BC Liberal Party’s crushing 2020 election loss suggests the team under Andrew Wilkinson’s leadership took an unwinnable situation and made it worse.

“It is possible for a post-mortem review to quickly devolve into an unconstructive finger-pointing exercise, but this analysis aims to drill down on the tactical execution questions rather than assign blame,” says the introduction to BC Liberals: Campaign 2020 Debrief.

The report, prepared for the party, then proceeds to identify problems with the party’s leadership, its preparedness, social media strategy, crisis management and more.

The BC Liberals won just 28 of the 87 seats available in the 2020 election held during the COVID-19 pandemic, a drop of 15 from the 2017 result where they essentially tied the NDP and narrowly failed to form government for the first time in 16 years.

The 34-page document was prepared by Ben Parsons, David Murray and Amber Ruddy at Counsel Public Affairs Inc. based on survey responses from 821 party members and interviews with 19 party officials, former strategists and candidates.

They found a consensus that Premier John Horgan called the election at a time when the NDP were popular, benefiting from positive perceptions of the government’s handling of the pandemic, and raising more money than the BC Liberal Party.

“Media in the province were perceived to be friendly toward Horgan and his inner circle, and broadly dismissive of the BC Liberal Party and Andrew Wilkinson,” they wrote.

With the measures in place to combat the pandemic, the party could do little to conduct public events, recruit volunteers, mobilize them or create political momentum.

“Most senior staff interviewed felt that by the time the election was called, it probably was not [winnable],” the authors said. “However, many felt that the BC Liberals could have retained more of their seats with a different strategy, message and leadership style.”

Many people noted Wilkinson struggled to come across well on television and online video, they said. He seemed thoughtful and empathetic in person, but on screen he seemed stilted, combative and uncomfortable.

“Many people were sympathetic to the circumstances of the campaign, felt that Wilkinson would have made a great premier and did the best as could be expected,” they said. “However, even among his biggest fans, there was a general sense that he did not possess some of the intangible qualities that would be required for someone to break through under such difficult political circumstances.”

Wilkinson’s shortcomings were perhaps most on display with the handling of “the biggest communications challenge of the election,” the handling of controversies around incumbent candidates Jane Thornthwaite and Laurie Throness, neither of whom won re-election.

In Thornthwaite’s case, podcaster Mo Amir posted a leaked video from a “semi-closed virtual Zoom event” organized as a “roast” of retiring BC Liberal MLA Ralph Sultan where Thornthwaite was recorded making offensive comments about NDP MLA Bowinn Ma while Wilkinson and others looked on.

“Wilkinson publicly chastised Thornthwaite but did not remove her as a candidate,” the report said. “While it was understood that Wilkinson should have immediately apologized for his silent acquiescence on the Sultan Zoom meeting, some felt that his public dressing down of Thornthwaite was similarly unhelpful.”

By saying Thornthwaite had “made a fool of herself,” Wilkinson, in some people’s view, “may have done more to harm his image in the eyes of women than the initial controversy.” Instead, he should have simply apologized for his own role and moved on, they thought.

The report describes the Throness affair as being more drawn out.

It began in the summer when it was pointed out that Throness and other BC Liberal MLAs had bought advertising in a magazine opposed to the public school curriculum on sexual orientation and gender identity.

“Wilkinson condemned the views expressed in this publication and prohibited MLAs from advertising there in the future,” it said. “Throness then openly defied the edict, proclaiming that he would continue advertising in the magazine.”

Then, during the campaign, Throness compared contraception to eugenics, setting off a media firestorm and leading to his resignation, which Wilkinson accepted.

“Some people interviewed felt that Throness should have never been allowed to run in the election,” the report authors said. “His controversial views on gay rights and abortion were not shared by the leadership or staff of the BC Liberal Party and did not represent the political agenda they were pursuing.”

The party was, however, in a bind that would be familiar to other parties in Canada, including the federal Conservatives.

“Officials said that the party’s tolerance of his behaviour resulted from a fundamental tension which exists within the BC Liberal Party and most other centre-right parties in Canada,” the analysis said. “There is a belief, correct or otherwise, that alienating socially conservative Christian voters will make it impossible to assemble a winning coalition.”

On the other hand, others felt associating with social conservatives drove voters away, particularly in Lower Mainland ridings. “They pointed out that the province is becoming more progressive on social matters, with even traditionally conservative ridings starting to fill up with progressive-minded ex-urbanites fleeing the city for affordable real estate.”

Regardless, there was a consensus that Wilkinson should have removed Throness as a candidate sooner than he did.

Even ahead of the two crises, the BC Liberal Party was poorly prepared at the start of the campaign, the review found. Partly that was because opinions among staff differed on whether Horgan would actually call a fall election.

While some saw signs the premier was preparing to do so, others thought it was a bluff.

“More than one person on the central campaign admitted to this misjudgment and felt that it might have had a material impact on the campaign,” the report found.

There was a scramble to recruit candidates at the last minute, and in some ridings packages of key information weren’t available until two weeks into the campaign. Some senior officials believed incumbent MLAs hadn’t taken the election threat seriously and so hadn’t done enough fundraising ahead of the election call.

“However, no interviewee felt that this miscalculation would have changed the ultimate result,” the authors concluded. “A few more weeks or months of preparation may have saved a few marginal seats, but it would not have been enough to ultimately turn the tide.”

During the election period itself there was a lack of campaign managers and some people were stretched having to manage campaigns in more than one riding. Without social events it was difficult to recruit volunteers or build a team. Many past volunteers decided to sit it out, and some were never even asked to participate.

And then there was the party’s platform, which was adequate but uninspiring, the report found, and announced too late to be used effectively.

“Even in ridings where the BC Liberals won, many respondents felt that the platform did not do a good job of ‘understanding the problems of everyday British Columbians,’” they found. “This illustrates an interesting disconnect between what BC Liberal activists feel are their personal values versus the values they perceive are held by the wider voting public.”

There was a general sense that the platform and campaign events were aimed too much at the interests of rural voters, but others argued the focus was needed to prevent an even broader collapse of the BC Liberal vote. “Very early on, it became apparent that the party was going to lose seats, and thus, the ‘pickup trucks and blue jeans’ strategy was employed to shore up the rural base.”

The BC Liberal Party outspent the NDP on advertising during the campaign, but that came after a long pre-writ campaign that NDP ads had dominated. The NDP also benefited from more third-party advertising support.

One of the key battlegrounds of the election was social media, the authors wrote, and the BC Liberals lost badly there.

“Journalists often take the temperature on any particular issue from a small group of influencers on Twitter and file their stories accordingly,” they said. “The type of people who are active and influential on Twitter tend to be younger, urban members of the professional/managerial class. Unfortunately for the BC Liberals, this is a group of people who tend to support the BC NDP.”

At the same time, some BC Liberal MLAs were “incapable or unwilling” to build their own presence online and believed their reputation alone would be enough to get them elected.

It was a failure on a strategy that had worked for the party in the past. “One participant suggested a return to the 2013 strategy of curating and co-ordinating a large group of BC political social media influencers to help shape elite public opinion on Twitter.”

As for the media itself, BC Liberal strategy fell short there as well. “Multiple interviewees described a difficult media environment, with the press gallery left with a small number of overworked journalists who were uninterested in reporting on BC Liberal announcements.”

The media focused more on daily COVID-19 briefings, and it was hard for Wilkinson and the Opposition Liberals to break into the discussion. “Being the Opposition during a major crisis meant that very little the BC Liberals said or did would ever merit a headline. Even when Premier Horgan called a nakedly opportunistic election in the middle of a pandemic, he experienced very few consequences from the media or public.”

The party is making the report public as it gets started on a leadership campaign to replace Wilkinson.

Looking forward, the authors passed on suggestions to revitalize campus clubs as a way to recruit young people, focus more on training prospective candidates and campaign managers, and invest in rebuilding a “digital influencer” program. 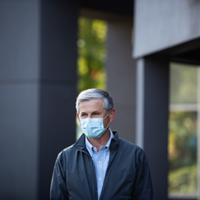 The Woes of Andrew Wilkinson

The party should also set and enforce targets for MLAs in fundraising, recruiting volunteers and identifying voters.

It’s not until the report’s last paragraph that it touches on the need to do more to recruit and support people from diverse backgrounds.

“The party is perceived by many as lacking diversity — fairly or unfairly,” they found. “The BC Liberals need to recruit, listen to and elevate British Columbians of every gender, sexual orientation, religion, ethnicity and economic background. The province has changed, and so should the BC Liberals.”

The big questions around vision and ideology, they note, will be answered when the ongoing leadership race ends in February. The party members’ choice will determine the party’s approach to the next election and beyond.