B.C.’s Forest Practices Board says it’s satisfied with the government’s response to an investigation into concerns about forestry practices in the Prince George timber supply area.

But Judy Thomas, the retired provincial stewardship forester who filed the complaint that led to the investigation, says the response sidesteps the urgent need to address old-growth protection.

In December, following a year-long review, B.C.’s forestry watchdog released a 28-page report that focused on concerns with the province’s lack of compliance with a 2004 legal order that established landscape biodiversity objectives for the Prince George area.

The report included two recommendations for the region.

It called on the Ministry of Forests, Lands, Natural Resource Operations and Rural Development to map out areas within the Prince George area with “immediate risks to old forest.” Currently, the Prince George timber supply area sets out a percentage of forests that must be maintained but does not specifically identify old-growth areas for protection.

In addition, the board recommended the province bring biodiversity requirements for the timber supply area in line with “emerging partnerships with First Nations, following a transparent process for public involvement and considering the potential implications for climate change.”

The province was given until May 30 to respond.

Thomas’s complaint was based on research she did with her husband, Rob Norwell, that looked at the harvest of spruce beetle-infected forests between 2014 and 2019.

It found a disconnect between the claimed objective of curbing the beetle’s spread and what was happening on the ground, with 70 per cent of stands harvested containing less than 10 per cent dead trees. In the entire district, 62 per cent of logging was in areas where there was no spruce beetle at all, the study found.

Thomas was initially hopeful that the Forest Practices Board investigation would lead to meaningful change for old-growth forests in the Prince George area.

But she says the land-use planning process outlined in the province’s response is inadequate and won’t protect old growth.

Thomas said the provincial response doesn’t take into consideration the findings of the old-growth review, A New Future for Old Forests, released by the province in September. It calls for immediately bringing management of old forests into compliance with provincial targets and guidelines for biodiversity.

During the fall election campaign, Premier John Horgan promised to implement the report’s 14 recommendations in their entirety.

In the province’s two-page response to the Forest Practices Board decision, submitted May 27, Omineca region acting executive director David Van Dolah said the ministry is in the process of responding to the old-growth review, something he said was considered in the response.

In addition, the letter says the province has initiated work with local First Nations to develop interim mapping consistent with old-forest retention objectives in the order for the timber supply area.

Priority will be given to areas of greatest ecological risk, Van Dolah said. The mapping is an interim measure, expected to last two to three years, to protect forests while a land-use plan is developed.

“Land-use planning in a significant portion of the Prince George TSA is in the early stages, and old growth is a primary value under consideration,” it said. “Long-term protection will come through a finalized land-use plan anticipated once a broad public process has been completed.”

Thomas fears this could mean two or three years of “unfettered access to old growth.”

“We’ve already had a season of logging since this report came out,” Thomas said. “We saw that there’s been proportionately more old-growth put into cutting permits in the timber harvesting land base.” 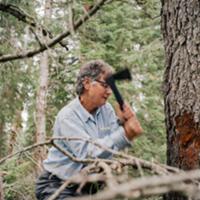 Kevin Kriese, chair of the Forest Practices Board, said the organization tasked with overseeing B.C.’s forest industry is satisfied with the province’s response, adding the region had committed to initial mapping along with land-use planning.

“It’s not just a forward commitment, but the fact that they have initiated work on both of those,” he said. “It was a pretty clear response, so we’re satisfied.”

He said he expects old-growth areas will be identified first and logging deferred. A final decision on logging them will be made through the land-use planning process, he said.

While it isn’t a legal order, he believes that the province’s response indicates it has already moved toward delineating areas with old growth in preparation for moving toward higher-level land-use planning.

“We try and stay out of the details until we’ve seen it,” he said, adding that the initial action from the province is promising.

“On the balance, this is actually one of our clearer responses,” he said.