A natural gas lobby group could delay action on a pillar of the City of Vancouver’s Climate Emergency Action Plan this week.

The plan currently requires all new homes to be built with zero-emissions heating and hot water systems starting Jan. 1, which could effectively ban natural gas hookups in new homes.

But after the Canadian Institute of Plumbing and Heating sent a letter to the City of Vancouver saying the industry couldn’t meet the January deadline and needed an additional one to two years, an amendment was added to the action plan that would delay the zero-emissions requirements by one year.

City council will vote on the amendment Tuesday.

The Canadian Institute of Plumbing and Heating is a non-profit association with 270 companies across the country who manufacture and distribute plumbing and heating products. In its letter the association said Vancouver should maintain its gas piping infrastructure for the eventual rollout of alternative fuel sources like hydrogen or renewable natural gas.

The Climate Emergency Action Plan was first introduced in 2019.

OneCity Vancouver Coun. Christine Boyle said that a one-year delay would punish climate leaders in the building industry and signal to the fossil fuel industry that the city is willing to cave on its climate goals “with a tiny bit of pressure.”

Over half of Vancouver’s greenhouse gas emissions come from burning natural gas for heat and hot water, according to the plan, so it’s hugely important for old homes to be retrofitted with electric appliances and urgent that new buildings are built to be as close to zero-emissions as possible, Boyle says.

“This particular lobbying letter claims the industry isn’t ready, but I hear otherwise,” Boyle said. “There are a number of companies who, because we laid out this timeline, have already been making investments to be in line with it. If we delay the plan, we’re punishing those that took us at our word.”

Albert Rooks would be one of the business owners negatively impacted if the zero-emissions requirements are delayed. He’s the founder of Small Planet Supply, a heating, ventilation and air conditioning company specializing in all-electric heat pumps for water and space heating based in Vancouver.

In an email, Rooks said he’s been following the city’s climate emergency actions closely. Since 2019 he’s made two big investments and expanded his team to meet opportunities in Vancouver’s low-carbon transition.

He says he doesn’t support the delay.

“It will hurt our business by changing the rules that we crafted a plan to serve,” he said. “It’s tough when one company spends the time and money and the other doesn’t. How do you invest the next time if you can’t count on the city’s decisions that guide the market into what fuels are acceptable and safe?”

The industry group’s claim it needs more time is just a tactic from the oil and gas industry to hinder Vancouver’s transition from natural gas, says Shaun St-Amour, product consultant with 475 High Performance Building Supply and a British Columbia Institute of Technology instructor in the passive house tradesperson course.

St-Amour says the building industry supports Vancouver’s climate action plan and that it should refuse the “dinosaur company trying to pull dinosaurs out of the ground and bring them back to life.”

“We have the technology, the resources, the know-how and the ability to build better buildings,” St-Amour says. “Having policy behind it is a really crucial step with enforcing it and getting people to change who are typically reluctant to do so.”

Dr. Anjali Helferty, executive director of the Canadian Association of Physicians for the Environment, says Vancouver’s climate policies need to be defended in the name of public health.

In an email, she said the million B.C. households that burn natural gas in furnaces, water heaters, fireplaces and kitchen appliances collectively produce the same amount of pollution as 800,000 vehicles. Households that cook with gas can have higher rates of childhood asthma, she added.

The association is “alarmed” by what Helferty says looks like a natural gas industry-backed effort to stall some of Canada’s strongest climate policies.

“It is clear they are concerned about the inevitable transition to clean energy and are attempting to stall this transition for as long as possible,” she said.

The Canadian Association of Physicians for the Environment runs a campaign called Switch It Up, which advocates for the transition to electricity from natural gas and works to raise awareness on the climate and health risks of residential gas.

The campaign’s website says pushing the zero-emissions requirements to January 2023 would allow 10,000 to 13,000 new homes to be built connected to natural gas in Vancouver.

In an email, FortisBC, which delivers gas to more than a million B.C. households, says it averages around 1,350 new customers in Vancouver annually.

In March, the B.C. government said the province needed to reduce its emissions from buildings and communities by 59 to 64 per cent from 2007 levels by 2030 to achieve its climate goals.

“The City of Vancouver was going to create some breathing room and stop making the situation worse and the hill we need to climb to hit these targets smaller,” Mills says. “When every decision we make on climate right now has to be the right one, we can’t afford to delay for another year.”

There’s also a municipal election in 2023, which Coun. Boyle says could delay the zero-emissions requirements further. 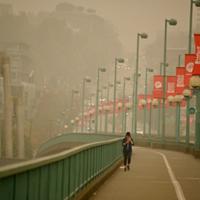 Can Metro Vancouver Prevent Thousands of Deaths from Air Pollution?

“The greenhouse gas impact of a one-year delay would reach beyond just Vancouver’s borders. It’s absolutely critical we stick with our commitments we made and continue to move forward with the urgency that is needed for the climate emergency we’re in,” Boyle says.

When asked if FortisBC supported the one-year delay, the company provided an emailed statement.

“FortisBC and the City of Vancouver are on the same page on the need to take action on greenhouse gas emissions reductions,” it said. “We’re confident that we can contribute to the climate action goals of the city and we’ll continue to work to advance these shared goals, regardless of potential delays to a bylaw.”

Environmental groups like DogwoodBC, the David Suzuki Foundation and Switch It Up are calling on people across the province to contact Vancouver’s mayor and councillors and ask them to vote against the change to the plan.