RCMP units in British Columbia broke the force’s own rules when they secretly subscribed to a facial recognition service that claims to help identify terrorists, documents newly obtained by The Tyee show.

Internal emails reveal that in 2016 the RCMP became a client of U.S.-based IntelCenter, whose website boasts of a massive cache of images acquired from various sources online, including social media.

IntelCenter offers enforcement agencies the ability to match against more than 700,000 faces the company says are tied to terrorism.

To create its software, IntelCenter partnered with a facial recognition tech company named Morpho, later bought and renamed Idemia, which provided biometric services for clients including the FBI, Interpol and the Chinese government.

In documents acquired by The Tyee through access to information requests, the RCMP blanked out its total volume of searches, but the US$20,000 price paid on contracts indicates the force likely purchased thousands of searches annually.

The B.C.-based E Division told The Tyee it bought the software to test its feasibility, and only did so in B.C. The contracts came to an end in 2019, said the BC RCMP. The force’s national headquarters said that it currently has no national contracts.

Privacy and civil rights experts told The Tyee they worry facial recognition systems can produce false positives with particular bias against racialized individuals and can unlawfully incriminate Canadians and foreigners. They say it’s unclear how the images are harvested, raising a range of concerns about privacy and accuracy.

Internal emails reveal persons within the Operations Support Group in the BC RCMP contracted with IntelCenter in ways that contravened policy while hiding from the public the fact that it now possessed facial recognition software.

According to these exchanges, members of the RCMP:

‘As easy as Google’

When IntelCenter CEO Ben Venzke launched his company’s facial recognition service in 2016, he said it would make “searching for the face of a terrorist [as] as easy as running a Google search,” according to a report by the Intercept.

Venzke wrote in an email that the tool would be limited to “military, intelligence and law enforcement agencies of qualifying countries” without specifying the criteria for qualifying.

IntelCenter’s partnership with leading facial recognition contractor Morpho was reported by the Intercept in November 2016. That same month, the RCMP’s B.C.-based Operations Support Group awarded a contract to Venzke for a product named IntelCenter Check.

The initial RCMP contract was for a sum of US$14,200, worth at least 2,000 searches by IntelCenter’s currently listed pricing scheme of $5,000 for 1,000 searches per year. The force later renewed the arrangement, increasing the commitment to US$20,000.

Emails show members of Operations Support Group had discussed how the cost would be broken down among various task forces, including Federal Serious and Organized Crime, which investigates gang activity; Integrated National Security Enforcement Team, a counterterrorist team created in the wake of 9/11; VIP, which safeguards Canadian and foreign dignitaries; and Shiprider, a joint team between the RCMP and U.S. Coast Guard that patrols the U.S.-Canada border.

But on May 23, 2017, IntelCenter sent a notice that payment was late, and the service was about to be cut off unless it received an “urgent” wire transfer.

That caught by surprise an out-of-the-loop, unnamed RCMP procurement official, who sent an email blasting a task force administrator in Operations Support Group. “We need to know why you went over your $10k contracting authority without involving the CMB Procurement and Contracting? And how do you ensure this won’t happen again.”

The target of the procurement official’s anger responded that the cost of the contract “totally slipped my mind.” The administrator promised to now fill out requests for approvals after the fact, “backtracking the process to pay for goods already received and in-use.”

The task force administrator caught more flak in a May 2, 2017 document titled “Retroactive Contracting Report” that says the purchase “contravenes procurement policy” and recommends the administrators attend “procurement 101” seminars from headquarters in Ottawa.

The same document indicates the force had received access to IntelCenter by Dec. 1, 2016.

“No other company offers this unique service and the information is not available from government sources within Canada,” wrote William Whalen of Federal Serious and Organized Crime in making the case for sole sourcing.

Whalen added that IntelCenter had provided a “detailed presentation on the service’s most recent upgrades” to “management” in April 2017.

Kate Robertson, a criminal defence lawyer and researcher at University of Toronto’s internet security-focused Citizen Lab sees the RCMP’s buying and using of IntelCenter Check as further evidence of the need for better oversight on how the force conducts surveillance.

“A fundamentally new approach is needed which prioritizes, at every turn, the elimination of systemic discrimination and racial profiling in Canada’s justice system, rather than investing in flawed and biased technologies that put human rights on the chopping block,” Robertson wrote in an email to The Tyee.

Robertson questions how Canadian authorities could be certain of the methods used to associate individuals with terrorism.

“It appears that this image database at least partially included data scraped from social media platforms, which is a dangerous and inaccurate method of data analysis that is unlikely to produce accurate or reliable intelligence. The name of the software tells us absolutely nothing about the validity of its underlying data,” wrote Robertson.

The Tyee sought an interview with IntelCenter but received no response.

Tim McSorley of the International Civil Liberties Monitoring Group notes that the Canada Border Services Agency announced it was using facial recognition technology about the time the RCMP signed on with IntelCenter.

CBSA completed a privacy impact assessment and released summaries to the public outlining its plans to test and implement facial recognition tools.

The RCMP has failed to file and release summaries of such privacy impact for similar technologies it was discovered to have used. Those include the RCMP’s use of Babel X, as reported by The Tyee.

McSorley also has concerns about how someone ends up in IntelCenter’s cache of people with alleged ties to terrorism. “Where is this database of over half a million faces coming from and what lawful basis is the RCMP using it to verify the identity of individuals?”

Mike Larsen of BC Freedom of Information and Privacy Association has questions, too. “I’d be very curious to hear at what stage in a process does the RCMP deem it to be legally reasonable to use this and then what's the outcome of a hit if you get a positive?” asked Larsen.

“There’s only a handful of national security investigations going on in Canada at a given time by the RCMP. This would, by definition, be much broader than that,” Larsen added.

Software, or just a database?

Throughout the RCMP internal emails IntelCenter Check is referred to in some instances as a software, but in others as a database. The force considers these to be distinct, with software requiring closer scrutiny from higher-ups.

When the IntelCenter contract came up for renewal in February 2018, Karen James, then director of Strategic Acquisitions and Policy at RCMP national headquarters, reviewed the application and noted in an email to an unnamed E Division procurement representative that the fee included “access for unlimited users in the RCMP” and referenced “training and 24-7 support,” though it was “not clear what this entails.”

“Is there another policy centre that should be weighing in on this?” asked James.

She also asked whether IntelCenter Check should be shielded from public disclosure, “given the nature of this subscription.”

“This is not a software, it is only a subscription to an online database. It is an open-source database, much like BC OnLine,” responded an unnamed member of E Division procurement, likening IntelCenter’s facial recognition platform, sold only to law enforcement, to a publicly accessible B.C.-government database for corporate, court and land records.

In other emails, however, E Division widely used the word software to describe the IntelCenter product.

E Division procurement argued its use of IntelCenter Check could be publicly disclosed. But a handwritten note on 2016 contract documents may show why it concluded that would not attract too much attention. The force aimed to list the procurement under the government category “general photographic" services.

On a federal website publicly disclosing contracts, the RCMP ultimately placed IntelCenter’s service under the category “data and database access services,” and the 2018 renewal under another heading. In both cases the public was prevented from knowing the RCMP was using facial recognition technology.

Emails show E Division was granted an extra grace period exempting it from required approvals from the RCMP chief information officer at national headquarters when it renewed the contract in March 2018.

Sgt. Kris Clark of the RCMP E Division in B.C. told The Tyee the force only purchased and used the IntelCentre Check software to evaluate it. The B.C. units just performed test searches using images of consenting RCMP employees, and never in actual operations, said Clark.

But documents have shown that the RCMP has actively deployed other software programs, including surveillance software, while claiming they were still in the testing phase, a cover the force can use to avoid public disclosure.

Clark said the BC RCMP, after purchasing the abilities to run tens of thousands of searches, opted not to renew the IntelCenter contract starting in 2019. 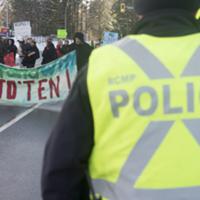 In the same year the IntelCenter subscription was allowed to expire, the RCMP quietly purchased Clearview AI facial recognition services, show contracts previously obtained by The Tyee and written about here and here.

Robin Percival at RCMP national headquarters corroborated Clark’s account of ending the IntelCenter relationship, writing to The Tyee that “there are no national contracts with IntelCenter.”

The emails make clear that by RCMP protocols such software purchases must be approved all the way up the chain. Asked to list RCMP units or divisions that had been okayed by national headquarters to use IntelCenter’s facial recognition service, Percival did not provide answers.

The RCMP has previously made untrue or misleading statements regarding its use of technology including facial recognition to The Tyee and CBC.

According to reporting by The Tyee and Maclean’s, it is RCMP policy to allow members to maintain secrecy for some operations by misleading the public and “all but the courts.”