The British Columbia government is working on its own solution to fill the gaps in a federal paid sick leave program, Premier John Horgan said Tuesday.

“We were disappointed to see no progress, and therefore we’ve gone back to the shelf and taken the programs we were working on here in British Columbia and we’re trying to get those up to speed to fill the gaps at the federal level,” Horgan said.

The federal CRSB offers $500 a week for a maximum of four weeks during the year.

In a recent interview with The Tyee, the president of the BC Federation of Labour, Laird Cronk, described the federal program as “woefully inadequate.”

His criticisms included that the amount offered is less than the minimum wage in B.C. for someone working full-time hours, and that there’s too long a lag between when a worker stays home from work and when they can expect to be paid through the program.

In Ontario, Premier Doug Ford’s government had offered to contribute to the federal program so that benefits to workers in his province could be doubled, but the federal government rejected the offer, saying its program is intended as a stopgap while provinces move to mandate their own paid sick leave.

Horgan said in B.C. his government’s focus has been on establishing a national paid sick leave program and he still believes that would be the best solution, but it’s become clear the federal government doesn’t intend to improve the CRSB.

B.C. had already started work on its own program last year that it will now draw on, he said. “We have work underway, and we’ll have more to say in the days ahead.” 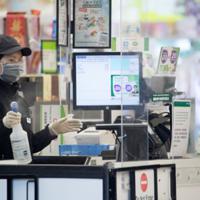 The province has seen outbreaks of COVID-19 in workplaces because people who were sick have felt they had to go to their jobs so that they could meet the needs of their families, Horgan said.

“People shouldn’t have to make that choice,” he said. “I believe it’s the responsibility of all of us to fill that gap, and we’re going to find a way to do that.”

Cronk has suggested the provincial government change the Employment Standards Act to create a system where everyone gets at least three paid sick days a year and accrues more with each pay period, up to a maximum of 10, much the same way vacation pay works.

More than 50 per cent of British Columbians get no paid sick days, and the number is even higher — about 80 per cent — for workers who make less than $30,000 a year, a group that includes many people working in grocery stores and other frontline positions, he said.