[Editor’s note: Following conversations with a source after this story was published, we have made some revisions out of sensitivity to people involved.]

The pair would rather live in a tent in the northern B.C. community than shelter at its supportive housing project, Goodacre Place, where at least half a dozen people have died over the past year.

On Friday, the BC Association of Aboriginal Friendship Centres and Dze L K’ant Friendship Centre Society in Smithers called for an Indigenous-led investigation into the deaths, which they say are the highest of any BC Housing facility in the province.

Stikine MLA Nathan Cullen and a spokesperson for BC Housing both said later in the day that the province would hire two independent investigators, one of them from the Wet’suwet’en Nation, to determine what led to the deaths.

But the news has shaken community members and local service providers, raising the importance of safe and culturally appropriate housing for those experiencing homelessness and addiction.

“Everyone’s worried,” says Patrick, who can easily name six people who have died at the facility over the past year, all of them Indigenous men and most with a family connection to herself or Hyzims. Several more who accessed services at the site are believed to have died in the community in the past year.

“If I stay there, I don’t know if I could see more people like that. It’s too hard,” she says. “It’s like they’re not even checking up on them.”

The facility opened February 2019 as part of the province’s Rapid Response to Homelessness program, which promises “around-the-clock staffing to help young people, people with disabilities, seniors and others in critical housing need.”

Developed in partnership with BC Housing, the Town of Smithers and Smithers Community Services Association, it offers affordable housing in addition to supports like meal programs and life-skills training, as well as health and wellness support services, says BC Housing.

It has 22 units of long-term and short-term emergency housing reserved for “people who are experiencing homelessness or who are at risk of becoming homeless,” according to Smithers Community Services Association’s website.

But Patrick and Hyzims say there is not enough oversight at the facility, where tenants use substances while unsupervised in their rooms and no one checks on them, sometimes for days at a time.

The pair says rooms where tenants can sober up before returning to their suites and someone checking on them — every day, if not every few hours — would make the facility safer. Cultural activities, Patrick adds, would improve mental health and provide a diversion from turning to substance abuse.

Instead, she says the facility provides a roof over heads but largely leaves tenants on their own, often to drink or do drugs unseen in their suites. It’s led to many of the deaths over the past year, she says.

Annette Morgan is executive director of Dze L K’ant Friendship Centre in Smithers. She says the society has been trying to build an Indigenous-run supportive housing facility for years but has experienced delays and a lack of support from the town and Smithers Community Services Association, which runs Goodacre Place.

“The Dze L K’ant Friendship Centre Society has recognized that Smithers is the poorest example of Indigenous housing in the province, and we've stated that for a number of years,” Morgan says.

The society applied to the BC Housing’s Indigenous Housing Fund and was a top applicant, she says, but delays by the Smithers town council caused them to miss out on the opportunity.

“We lost out on $8 million in this community, and that project would have been shovel-ready this month,” she says. “This is not about pointing fingers. It is about having concrete answers, and having the community ask questions as if this was their brother, their son, their father.”

Smithers Mayor Gladys Atrill said Tuesday the town has supported Dze L K’ant Friendship Centre’s housing proposal with land for the project. The site, in the town’s centre, was rezoned in 2019 to permit multi-residential housing but requires environmental remediation, which the town has budgeted $650,000 for this year, she said. The remediation is expected to be completed later this year and the site ready for development next spring.

Leslie Varley, executive director of the BC Association of Aboriginal Friendship Centres, says the 25 friendship centres around the province work to meet the needs of their communities, which sometimes includes running their own housing projects.

“That's a high need that is being really well addressed by the Prince George friendship centre,” she says, adding that Prince George Native Friendship Centre has a range of Indigenous housing units, making it the second largest landowner after the city.

Smithers has the same need, but it’s not being addressed, she says.

“They’re a really good and well-respected organization and why they wouldn't be supported by that community to develop some housing for Indigenous people is beyond my understanding,” she says about Dze L K’ant Friendship Centre.

“It's the right thing to do, to let us look after our own people.”

Morgan and Varley both add that being located along the Highway of Tears, a 700-kilometre stretch of Highway 16 between Prince George and Prince Rupert where the cases of up to 50 missing or murdered women remain unsolved, makes safe and supportive housing even more urgent.

Sarah Zantingh is the on-site manager for Positive Living North in Smithers. The organization delivers services to members infected and affected by HIV and Hepatitis C, but also offers hot meals and harm reduction supplies to anyone in need.

She says there needs to be more collaboration between the various organizations that provide services in the town, as well as more Indigenous knowledge and cultural practices in the delivery of those services.

“I think just having more voices at the table, having different agencies that work with the population that they're providing services to, and having some people with lived experience,” she says. “There’s so much value in their lived experience, and I don't think it's used enough.”

Zantingh says the community’s only access to a safe drug supply is prescribed through doctors, which creates barriers to access, and there are no overdose prevention or safe injection sites.

There’s a need in the community for those things, she says.

She says fear has been growing amongst her clients as the deaths mounted over the past year and, in addition to the deaths, she also hears about physical and sexual violence at the supportive housing complex.

Zantingh says her clients have referred to Goodacre Place as “where you go to die.”

In a news release Tuesday, Smithers Community Services Association said the passing of six Indigenous men at Goodacre Place has been devastating for staff, and that “our hearts go out to their families and friends who are facing this loss.”

In the statement, SCSA executive director Cathryn Olmstead said the organization cannot share personal information surrounding the tenants’ deaths but is “looking closely at the programs and services offered at Goodacre Place to determine how to better support the folks who live there.”

It welcomes the independent review, Olmstead said, and the organization has already taken steps to examine the circumstances around the deaths at its facility.

“Our hope is that as a community we can face these challenging and complex situations in a constructive and collaborative way that pulls people together,” Olmstead said.

In an emailed response to The Tyee, BC Housing, which provides subsidized housing across the province, called the recent deaths in Smithers “incredibly tragic.”

“Our heartfelt condolences are with those who knew and cared for the people who have died,” it said, adding that the agency, which is under the Ministry of Municipal Affairs and Housing, is hiring two third-party contractors to conduct an independent review of the deaths and allegations. One of the contractors will be Indigenous, it said.

“We welcome and appreciate the letter from Dze L K’ant Friendship Centre Society and BC Association of Aboriginal Friendship Centres,” it said. “Culturally safe housing for Indigenous peoples is incredibly important, and something that BC Housing is committed to.”

Atrill also provided an emailed statement, saying that those at the town are saddened by the news and offer condolences to families and friends, as well as to staff who worked with the residents.

“The town is keenly aware of housing challenges in our community and supports the Dze L K’ant Friendship Centre Society in its proposal for Indigenous housing,” Atrill said, adding that the town provided a letter of support that included identifying potential land for the society’s proposed housing project.

She added that the pandemic, coupled with the ongoing opioid crisis, has increased stresses for those experiencing homelessness, and suffering from mental health and addictions, and for agencies offering support to people in need.

“We at the town rely upon and are grateful for the work of all of our community partners in addressing these challenges and are committed to doing our part,” Atrill said.

MLA Nathan Cullen also extended condolences to affected loved ones as well as staff who are working under difficult conditions during the overlapping opioid crisis and pandemic.

“I knew a number of these men and they are some really beautiful people, and had lots of challenges and lots of beauty to them,” he says. “I’m feeling for their families and I’m feeling for the staff as well who cared enormously and continue to work hard in tough circumstances.”

He says the province is taking the deaths seriously by hiring two third-party contractors, one of them Wet’suwet’en, to conduct an independent review. Citing the importance of culturally safe housing, he says 26,000 affordable housing units have been created across the province and 9,000 more are planned for in the recent budget. 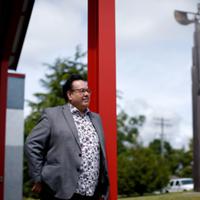 How Friendship Centres Keep Community Alive During the Pandemic

“We’re committed to it. We've done a bunch, we'll do more. But today, it’s about the families and community that's affected,” Cullen says.

Morgan says Dze L K’ant Friendship Centre continues to work with the province and BC Housing toward an Indigenous-led housing project that would provide culturally appropriate programming and a safe space for those who face unstable housing in the community.

“We’re ready. We’ve been ready for over a year,” she says.

So are those in the community who would use the service, says Patrick.

“Maybe if people had more things to do, cultural things, instead of just going out and drinking,” she says. “The friendship centre does so much for all of us, for the community. I think we would feel safe and I think we would get help more.”