The B.C. government’s housing spending will jump 12 per cent to $1.1 billion next year and stay at similar levels for the next two years, according to today’s budget.

The budget shows the government sticking to the course it set after the 2018 election, after a burst of activity to provide housing for homeless people during the pandemic.

One major initiative had already been announced last week, as the government added $2 billion to a loan program that previously had $800 million to offer.

The low-cost loans are offered to developers willing to build affordable rentals or homeownership options. The program will be administered by HousingHub, which the province created in 2019 to spur this kind of housing.

The government’s ability to borrow money cheaply means it is able to offer lower rates to developers compared to other lenders.

According to an analysis by the Globe and Mail, a single percentage point on a $40-million project could mean more than $1 million in savings for a developer over five years. The Urban Development Institute praised the initiative last week.

Developers who take out a loan must keep units affordable — as determined by BC Housing for households making around $75,000 — for 10 years.

Finance Minister Selina Robinson said in her budget speech that the goal of the loan program is to “accelerate partnerships.” About 9,000 units are expected to be created in the next three to five years.

Jill Atkey, the CEO of the BC Non-Profit Housing Association, said the 10-year commitment to affordability under the program seems “light.” The goal should always be the “highest level of affordability possible for the longest time possible,” she said.

However, she said it’s important to have that stock alongside other types of housing supply the NDP government is funding. It’s not likely that housing for $75,000-a-year households can be created without subsidy, Atkey said.

The definition of affordability has been criticized by housing advocates in recent years. New rentals called “affordable” by the City of Vancouver can go for about $2,000 for a one-bedroom in Vancouver and up to $3,700 for a three-bedroom.

But a report last month by the Canadian Centre for Policy Alternatives showed how difficult it is to build subsidized housing. Even without costs for land and municipal fees, a non-profit developer would still need to charge $1,273 a month for a one-bedroom apartment in a wood-frame building with modular construction to cover costs.

Aside from the loan program, the government is offering $1.6 billion over three years in grants to non-profit housing providers building low- and middle-income housing, hoping to add some 10,000 units.

The grants will be distributed through existing programs that target specific groups such as families, seniors, Indigenous people and women and children fleeing violence.

One such program, the Community Housing Fund, aims to create units starting at low-end market rents down to what seniors on government assistance can afford.

When the NDP took power in 2018, it released a 30-point housing plan with a mix of supply and demand measures, from cracking down on speculation to spurring the construction of a spectrum of new housing.

The government said on budget day that it has completed half of them, such as increasing renter protections to putting an end to the flipping of condo presales.

Outside the world of subsidized housing, the real estate market is on the rebound after being hit by the pandemic’s onset. According to the Canadian Real Estate Association, sales in B.C. plummeted to about 3,000 purchases in February 2020, but spiked in the following months, fuelled by cheap interest rates. In February 2021, there were 12,930 sales. Condos, townhouses and detached houses continued their upward climb, with an average Metro Vancouver house now costing $1.63 million.

The budget mentioned the “resilience” of the real estate market, which Paul Kershaw, an associate professor at the University of British Columbian’s School of Population and Public Health, said was “disturbing.” 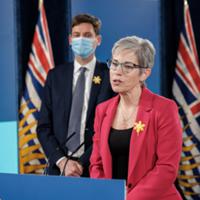 BC Adds $2 Billion into Fund to Encourage Affordable Housing

Kershaw, who founded Generation Squeeze, an advocacy group for young Canadians, called the new supply measures “incremental” and says the government needs to do more to cool the market.

To help British Columbians who can’t afford to buy or rent in the private market, Atkey says a significant construction push is needed in the non-profit and co-op sectors.

Marc Lee, who authored the CCPA report, agrees that the key to affordability is growing the non-market housing sector.

“Ultimately, we need to break away from a dominant mindset that sees private sector property developers as the primary builders of housing.”