On Feb. 17, Brandon Kirk was jogging with his small running group on the seawall of Vancouver’s Stanley Park when he felt a sharp pain in his leg. He turned around and there was the perpetrator, a coyote.

Kirk did everything that conservationists suggest for such encounters — yelled and waved his arms, acted “large and loud,” as the advice goes — but the coyote didn’t respond.

“It was not afraid at all,” he told CTV. Its aggression was a shock to him as a triathlete who had seen coyotes while cycling park trails before.

Kirk was the 15th person in two months to be bitten by a coyote in Stanley Park. As a result, the BC Conservation Officer Service closed several trails and warned the public not to run there.

Does this recent spike in coyote conflicts, multiple reports of cougar sightings and a black bear that swiped at a passing jogger on a trail last summer mean urban wildlife are responding to changes in human behaviour due to COVID-19?

Overall, we’re not experiencing the kind of triumphant return of wildlife to cities that was reported early in the pandemic, said Sgt. Simon Gravel of the conservation service with a laugh.

In March, there were viral news stories of swans and dolphins returning to deserted Venetian canals (“Nature is healing!”) and elephants visiting a village in Yunnan, China. They proved to be fake.

In B.C., what appears to be increased wildlife activity during the pandemic is likely due to more people being at home and outside to witness it, said Gravel.

Conflicts have always been a problem, especially when people teach wild animals not to fear them, like the Stanley Park coyotes.

“If you go there and feed the raccoons, squirrels or birds, you might be indirectly feeding the coyote,” said Gravel. “What we’ve been witnessing over time is that they’re getting bolder and bolder, losing total fear of humans, and not hesitating to attack a human.”

Vanessa Isnardy, the provincial co-ordinator of WildSafeBC, agrees it’s hard to directly connect the pandemic with changes in animal behaviour.

“We do know some of the negative behaviours that can lead to conflict have increased,” she said, such as leaving more garbage behind when visiting parks.

It’s all about “escalation,” Isnardy explained.

“Wildlife generally don’t want to come into areas where there’s a risk. But they’re drawn into the community by things we leave unsecured. All of a sudden, the reward outweighs a risk.”

Isnardy has some advice: secure garbage, maintain fences and don’t leave out pet food. These might be “unglamourous” tips, but they’re critical to preventing animals from getting habituated.

Last August, a coyote in Maple Ridge tried to get the last bits of food from a glass jar that wasn’t washed cleanly and got its head stuck. A conservation officer had to help remove it.

Picking ripe fruit is also crucial. Last summer, some B.C. residents with fruit trees did not do so. Then came the bears.

“An apple tree is a one-time bonanza for a bear,” said Isnardy. “Cougars almost always get reported, but a bear in an apple tree, people are more inclined to take out a cell phone and take a picture.”

But the feast can end up being deadly for the bear. Once the apples are gone, it will look for another nearby food source.

“In the fall, when they’re really trying to put on calories, they might come after garbage,” Isnardy said. That will bring complaints and could result in the conservation service killing the bear because of the risk of human conflict.

But COVID-19 has increased some risks.

As part of a pandemic trend of making, growing and raising one’s food, backyard chickens have become popular. WildSafeBC recommends that municipalities that allow them require electric fences to deter predators.

Cougar sightings and conflicts with pets have also been on the rise in Metro Vancouver, particularly in Coquitlam, Port Moody and Anmore. In early February, a cougar grabbed an off-leash dog and ran off with it, though the owner was able to give chase and scare it off. Another attacked a dog at Buntzen Lake.

“I don’t think people realize how much wildlife there is,” said Isnardy.

WildSafeBC is a program of the non-profit BC Conservation Foundation, which has a map of wildlife sightings based on the province’s wildlife-human interaction tip line.

A survey of the map since the beginning of 2021 reveals a variety of encounters: a coyote and an aggressive unidentified raptor at Vancouver’s city hall; black bears searching garbage in the Burnaby neighbourhoods around Deer Lake; deer drawn to a North Vancouver vegetable garden; and dozens of cougars in Port Moody and Coquitlam, even around the Moody Centre SkyTrain station.

The key is to intervene before we “run out of options,” said Gravel of the conservation service. “It’s not always possible to mitigate or correct the behaviour of wildlife.” 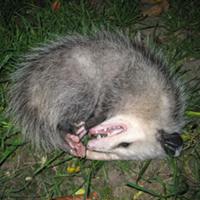 It’s possible to try and restore the fear of humans in animals like coyotes using hazing techniques such as firing non-lethal projectiles at them.

But in cases where public safety is threatened, and as a last resort, officers do kill animals with firearms, which Gravel says is a humane way to provide an immediate death.

That happened with the Squamish bear that broke into four chicken coops and two cougars, one juvenile and one adult, that stalked a 14-year-old walking home in Port Coquitlam. (The juvenile was killed; the adult could not be found.) In the past year, between 15 and 49 cougars have been killed per month in B.C.

“We want to connect with nature, but we often do so in a way that can be quite harmful for wildlife,” said Isnardy, like feeding birds with bread on pandemic walks or getting close to a wolf to snap a photo.