The 26 previous busy New Year’s Eves at Vij’s have seasoned the kitchen and serving staff at one of Vancouver’s most well-known restaurants. But last week the normally joyous evening was spent with kitchen staff in tears.

Dhalwala and a dozen other Vancouver restaurant owners are calling on the province to consult more closely with restaurants and give more warning when rules change.

“We consider ourselves as part of the team, we care about our customers and staff and their safety. We are working with the government to make sure the restaurants are safe spaces,” said Dhlawala in an interview. “We restaurants need to be consulted when it involves such a huge jarring adjustment at the last minute. Give us a week’s notice, and we’re resilient.”

Public health data from B.C. shows that restaurants have been low sources of transmission since they were allowed to reopen for dining in May, especially when all rules and measures were followed.

But Dhalwala said New Year’s Eve “was a night for us to shine.”

“We had it all planned. No one was going to let anyone kiss and dance and mingle in the restaurant. We don’t want to be in any danger zone either.”

Diners and restaurants had barely 24 hours advance notice that alcohol sales would be cut off at 8 p.m., rather than 10 p.m. The restaurants say that resulted in cancelled reservations, a flood of takeout orders and unruly customers who took out their frustrations over long waits for food on serving staff.

Vij’s lost its 8 p.m. reservations after the order was announced. The restaurant, expecting a busy night in the dining room, wasn’t set up for the resulting avalanche of takeout orders.

On New Year’s Eve it received more than twice as many takeout orders in just over an hour than it normally does on a busy Saturday, Dhalwala said. That caused massive delays in serving dine-in customers and filling takeout orders, she said, and they had to shut down their takeout service.

Dhalwala’s business partner, Vikram Vij, said that in 26 years of owning a restaurant, he had never had customers screaming in his face like he did that night.

“It’s customers blaming restaurants,” said Dhalwala. “We were humiliated. They were calling us shit shows, asking for refunds, screaming in our faces.

“It was servers who became the punching bags.”

And the cases of champagne and liquor they ordered for the evening went unsold, another cost as restaurants are struggling, said Dhalwala.

When Henry announced the change on Dec. 30, she encouraged people to support local restaurants with takeout orders.

But Dhalwala noted that preparing a restaurant for dine-in and takeout are very different. For takeout, restaurants need to be ready for a large number of orders, have space to store the prepared orders and a process to get the meals into the hands of delivery drivers.

The late change upended all their plans, said Dhalwala.

“It was like we were a horse that was running, and someone just closed a gate in front of us, and we just crashed,” she said. “Saying ‘do takeout’ is not a way of supporting us at the very last minute while taking away our abilities to serve people.”

When The Tyee asked on Friday, a Health Ministry spokesperson declined to comment on the concerns raised in the letter specifically and referred to comments Henry made in the afternoon on Dec. 31.

“I recognize absolutely that these restrictions are yet another challenge the restaurant and the food service industry has had to face in what has already been a very tough year, but two hours now is necessary for us to manage a situation, that will be lasting for many more weeks,” said Henry last week. 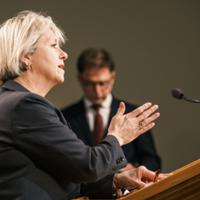 “I am confident the small step that we took will help us start the new year on a healthier and safer note.”

Dhalwala said she is grateful that people continue to support their restaurant, but noted many eateries just aren’t set up for takeout.

And none are used to the constantly changing rules.

“Sometimes I think, ‘just shut us down please,’ because while everyone is confused about dining rules, I’m happy to do takeout and delivery,” said Dhalwala. “It’s a lack of understanding of how restaurants work.”

Dhalwala, whose partner Steven Taylor wrote The Psychology of Pandemics, says she is concerned about the mental health of restaurant staff as they bear the brunt of the frustration and fatigue.

“I don’t know what our mental health will be like at the end of this,” she said. “No one likes to be watching an empty dining room.”