Three times a week, Erica Grant and a few other volunteers take over the tiny kitchen in the Downtown Eastside’s Savoy Hotel to chop a mountain of onions and garlic to make hamburger soup.

“It's just hamburger and whatever vegetables you have,” Grant explains, adding she includes spaghetti sauce for some extra flavour.

In her own even tinier kitchen, Skundaal is also cooking up an enormous pot of the same soup. Macaroni, canned tomatoes, spices and sometimes ketchup also go in, making a filling meal for hungry people.

The two women have been leading their small teams of volunteer cooks and distributors in the Downtown Eastside since the start of the COVID-19 pandemic in March. In those early days of the crisis, restrictions to prevent transmission of the virus left more people homeless as housing providers banned guests, shelters accepted fewer people and centres that provided meals reduced hours or capacity.

Ten months later, the teams are still working to feed people who live on the streets, heading out with wagons packed with dozens of containers of soup and buns, bagged lunches, masks and hand sanitizer and the latest information on COVID-19.

HOW TO MAKE 100 BOWLS OF HAMBURGER SOUP

Here’s the volunteers’ recipe for the much appreciated hamburger soup.

Preparation:
Cooking is divided into 3 large stockpots.
Sauté beef and store it in a pan.
Sauté onion and garlic until onions brown slightly, add the beef back in.
Add canned tomatoes and tomato paste, cook for around 5 minutes on high.
Add water up to 3/4 of the pot.
Bring to boil, lower to simmer, cook for around 30 minutes.
Season with salt, pepper and sugar to taste, add all of the ketchup and Italian seasoning.
Add frozen vegetables, cook for another 5 minutes on high heat or until it comes back to a boil.
Add pasta, cook for another 5-7 minutes or until it's al dente.

Although the teams wear masks and other protective gear when handing out food, “it's a big risk out there, and there's questions as to why we do it,” Skundaal told The Tyee.

“My answer is always that, for homelessness or poverty — we just can't put it on pause.”

The effort to feed people in the Downtown Eastside has involved residents like Grant and Skundaal, small non-profits and advocacy groups, as well as larger non-profits and social enterprises like Potluck Catering.

But while some services have now resumed, and drop-in spaces like the Carnegie Community Centre and Evelyne Saller Centre have reopened, the need for meals hasn’t dropped. Some, like the 150 meals Potluck continues to make every day, go to people who live in single-room occupancy hotels in the neighbourhood, often without access to a kitchen.

Other groups, including Grant’s team and Skundaal’s group, known as the “Moccasin Mafia,” focus on unhoused people.

“If you went out on the street at any time right now with meals, there would be people who would be grateful to receive them,” said Kathy Shimizu, a member and administrator of WePress Community Arts Space Society.

The non-profit usually does arts programming, but has been making 200 lunches a day and also helping to co-ordinate other meal preparation efforts.

Funding has come from the City of Vancouver and the federal government, as well as from the Vancouver Foundation, the United Way and a fundraising effort called DTES Response. Grant’s work is funded through a GoFundMe fundraiser started by community organizer Fiona York.

After the initial round of city funding ended in June, Potluck has scaled back its effort to a current 150 meals a day.

But other community groups like Watari and Downtown Eastside Neighbourhood House have stepped up. WePress has also been trying to revive a network of community kitchens in the neighbourhood that lost funding years ago.

“It used to be a way to connect smaller community kitchens in the neighbourhood who were cooking for others and also SRO tenants, sometimes in supportive housing, sometimes in privately-owned SROs,” Shimizu said.

“They would get them ingredients and they would cook for themselves and their neighbours.”

For some groups, making meals has been a way to keep connected with the Downtown Eastside community. Terri Gillis has worked in the neighbourhood for several years doing outreach to homeless people and managing drop-in centres, but she had taken time off to go back to school. During the pandemic she found herself mostly at home with some extra time to spare.

So Gillis and two other friends have been getting together every Wednesday since August to make around 30 meals that consist of a sandwich, fruit, a juice box and homemade baking. Because they load the meals into the back of Gillis’s truck, they call their effort Tailgate Outreach.

Gillis said they go into the alleys seeking out more isolated people.

“We don't do the main areas where there's lots of people,” she said.

“We do areas where we know there will probably be people who are more isolated and who aren't necessarily going to go stand in line at a soup kitchen or go to a church for a meal.” 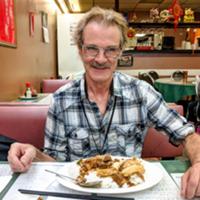 Jennifer Johnstone of the Central City Foundation said there was an initial wave of philanthropy supporting the Downtown Eastside during the first wave of the virus, with the assumption that things would be back to normal by now.

“I think the hope was that by now things would be back and running at a sufficient level under old funding agreements, and further dollars wouldn't be needed,” Johnstone said.

“But the reality is that many programs are not able to reopen and they do face additional costs and challenges. So there's a tremendous need for continued donations and funding support for groups in the inner city across the board.”

When Skundaal and her team of volunteers run out of food, they have something else to give to people: tickets for low-cost meals at the Evelyne Saller Centre.

The pandemic hit the community hard, she says.

“It was really sad at the beginning, I have to say,” she said. “Just that one meal or two meals — it really makes a difference. It really does.”