At the outset it didn’t look like a very fair fight. An international real estate investment and management company that had transformed an industrial block of New York’s Chelsea neighbourhood into a food hall and office complex visited by over 500,000 people each year wanted to do a US$1 billion redevelopment of the South Brooklyn waterfront — and a small community group run primarily by women of colour vowed to stop it.

“We would say it isn’t David and Goliath,” Elizabeth Yeampierre, executive director of the organization Uprose, told The Tyee. “It was David and five Goliaths.”

But when Jamestown Properties withdrew its application for the Brooklyn rezoning this fall, effectively killing the project in the neighbourhood of Sunset Park, several things had become clear: the company had severely underestimated the power of a low-income neighbourhood determined to prevent housing from becoming unaffordable.

And Jamestown’s vision for Sunset Park — a mix of high-end retailers, tech office spaces and luxury hotels — was not as appealing to community members as the alternative put forward by Uprose and its allies: a redesigned industrial waterfront where people could earn decent salaries building the wind turbines, solar panels and low-carbon technology necessary for a Green New Deal.

“It was not just a fight against developers. It was a fight for our climate future,” Yeampierre explained.

Brooklyn-based Uprose describes itself as “an intergenerational, multiracial, nationally-recognized, women of colour led, grassroots organization that promotes sustainability and resiliency.”

Its leader Yeampierre said linking the fight for affordable housing to climate change and green industries made it easier for Sunset Park activists to win support from local politicians, bring national environmental groups into the fight and deflect claims that they are against business.

“They said we were ‘anti-job’ — of course not,” Yeampierre said. “We come from a working-class background.”

Some observers see broader strategic lessons that could be applied in cities across North America. The successful fight against Industry City is “a good example to demonstrate that working-class communities also have an environmental conscience,” Samuel Stein, a New York-based housing policy analyst and author of Capital City: Gentrification and the Real Estate State, told The Tyee. Conversely, he believes, if climate activists “don’t talk about housing and if they don’t talk about jobs the fight is not going to go anywhere.”

And there may be lessons specifically for Vancouver, where the average income is skewed well below what market rents and home prices demand, and yet the city is actively wooing tech companies from south of the border, ignoring the escalating inequality and homelessness that the “innovation economy” has created in cities like Seattle.

Instead of offering “a safe haven for even more of these highly-paid tech workers,” as Mayor Kennedy Stewart said earlier this year, Uprose’s victory shows what it could look like if Vancouver prioritized the middle and low-income people living there.

‘You don’t know about us’

Jamestown’s plan for Industry City followed a narrative that would be familiar to cities all over Canada and the U.S. Once a thriving seaport hub filled with massive brick buildings, Sunset Park’s waterfront began a period of decline starting in the 1960s as manufacturing moved out of urban areas. In the 2010s the buildings were bought up by Jamestown and its partner Belvedere Capital, which spent US$450 million turning the complex into “a burgeoning innovation economy of engineering, design, manufacturing and production.” Where once there were decaying 19th century structures, now there were craft breweries and artisanal pickles.

That was supposed to be just the beginning. In February 2019, Industry City’s owners, which had also done similar projects in San Francisco, Atlanta, Boston and Manhattan, submitted a rezoning application that would add 1.45 million square feet to site, including two new hotels with 420 rooms. In promotional materials they described it as “the largest privately-owned industrial complex in New York City,” and a future hub for sectors like art and design, film and TV, technology, fashion, research and development.

The developers calculated this would bring on-site employment to 15,000, while creating 8,250 additional jobs throughout the neighbourhood and city.

But Sunset Park’s residents suspected it wouldn’t be them who benefited. Nearly 70 per cent of people in the neighbourhood identify as Asian and Hispanic, and many of them are undocumented immigrants without formal education; Yeampierre said nearly half don’t have a high-school diploma. Close to 28 per cent of residents live below the poverty line. Though rents are quickly rising, it is still one of the more affordable areas to live in New York. That could’ve quickly changed with a massive waterfront development.

“If you bring in a higher-income labour force, a portion of them are going to look for places to rent and buy in Sunset Park in the nearby residential areas, and that’s going to bid up house prices and rents,” Tom Angotti, a professor of urban policy and planning at Hunter College and author of Zoned Out! Race, Displacement, and City Planning in New York City, told The Tyee. The result, he said, is lower-income renters are “evicted or bought out and replaced by new tenants who can pay more.”

One of the first major confrontations took place on May 11, 2019, when local residents, business owners and the group Protect Our Working Waterfront Alliance joined with Uprose to crash a “Wine & Artisanal Food Festival” hosted at Industry City. Surrounded by people holding signs with slogans like “Do Not Crush Brooklyn,” Yeampierre claimed that Industry City would “repurpose the industrial waterfront for the needs of the wealthy.”

An Industry City spokesperson responded at the time with a statement saying “While we prefer to engage in thoughtful and civil discourse, we welcome all input from our neighbours.”

Throughout the year Uprose held strategy meetings with residents where they discussed the most effective arguments they could use against the redevelopment. “A lot of the community wanted to talk about displacement and we basically said to them, ‘sadly that’s not a winning argument because they don’t care whether we get displaced or not,’” Yeampierre said. Instead, she said, they should talk about climate jobs.

Uprose had been part of a climate coalition that helped push New York state to adopt a 2019 law called the Climate Leadership and Community Protection Act, which called for the state to become carbon neutral by 2050. Moving towards 100 per cent renewable energy is expected to create an estimated 150,000 jobs in the state by 2030. Not only that, but the law mandates that 40 per cent of public investments for the transition have to go to low-income communities of colour — places like Sunset Park.

“People think of the industrial waterfront as being this old polluting place but it could be the place you invest in renewable energy, offshore wind, food security, all of that,” she said. “We’re talking about jobs that pay US$60,000 to $70,000 to someone without a high school degree.”

“The Industry City rezoning, if approved as proposed... will result in gentrification and loss of social cohesion as white-collar residents move into the neighborhood,” reads a report it and other groups commissioned to analyze the feasibility of turning Sunset Park into a Green New Deal manufacturing hub. “In contrast to the Industry City proposal,” it added, the neighbourhood’s waterfront could become New York’s “first dynamic center for green industrial development.”

Linking the fight against housing unaffordability to green jobs gave the community something to fight for, rather than just oppose. It also turned a local zoning battle into a standoff with climate implications much bigger than Brooklyn. Because Yeampierre is also a co-chair of a national grassroots organization called the Climate Justice Alliance, she asked other environmental leaders if they would support Sunset Park. Many agreed.

At a hearing in late 2019, the North America director for the global climate group 350.org argued that “Industry City’s proposal does not reflect community needs and is a short-sighted plan for private developer profit.” Tamara Toles O’Laughlin added that “we need to keep our industrial waterfront industrial and utilize it to build for climate adaptation, mitigation and resilience.”

In New York it is customary that if a councilmember rejects a project in the area they represent, then the rest of the council will support the decision. This meant that Industry City’s fate effectively came down to local councilmember Carlos Menchaca. He had been critical of the project in the past but said he was open to approving it if Industry City met certain conditions, including removing the luxury hotels from its application. In late July, with those conditions apparently not met, Menchaca officially announced his decision.

“I strongly oppose this application,” he said in an Instagram video. “It is clear to me that the displacement and gentrification our city is combatting today is the result of giving private developers free reign.”

The rezoning sputtered along for the next month and a half, winning approval from New York’s City planning commission. But in late September, Jamestown withdrew its application. “They failed to gain support across the neighbourhood,” Menchaca said at the time. What the community wants, he said, is a “Green New Deal at a city level, to really bring jobs that are connected to our community and in the community’s vision.”

The climate vision tied to affordable housing was “very important” in building a political case against the project, Angotti said, but it wasn’t everything. “There was a confluence of factors,” he said. The coronavirus pandemic dampened the business case for shared office spaces and tourism. It was also Menchaca’s last term on council. Yeampierre suspects his decision to kill Industry City was calculated to build community momentum behind a campaign to run for mayor in next year’s civic elections, which he announced in early October. 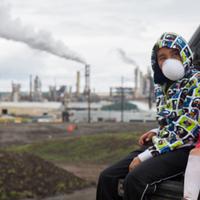 Now comes the hard work of actually making the Green New Deal vision for Sunset Park’s waterfront real. Jamestown still owns the site, and is unlikely to be very enthusiastic about working with the community. There will need to be funding and political commitment from local, state and federal policymakers at a time when the pandemic is still raging and budgets are severely depleted. “It takes government support, that truth can’t be avoided,” Angotti said.

But he thinks that Uprose’s ability to make climate action appealing to a low-income community struggling with poverty, immigration challenges, chronic health problems caused by air pollution and now the economic fallout from COVID can’t be understated. “They made it concrete,” he said. “People could really identify with it.”

Stein agrees that building a multi-issue coalition capable of defeating an international real estate company is major achievement — and one that climate and housing advocates in cities like Vancouver could potentially learn from. “They built enough power to stop this project, that’s huge,” he said of Uprose and other community groups. “They now need to keep going.”