Three women’s groups in the Downtown Eastside are calling for the immediate creation of a task force to end violence against women in the neighbourhood.

The call comes after Vancouver Sun columnist Daphne Bramham wrote about a video which appeared to show a man sexually assaulting a semi-conscious woman in daylight on the sidewalk at Main and Hastings streets, while cars and pedestrians pass by. The Vancouver Police Department says it is investigating the footage.

It’s not the only shocking incident in the neighbourhood. In April, when COVID-19 restrictions had closed many drop-in spaces and public bathrooms, a woman spent hours in a porta-potty in labour. No one apparently noticed she was in distress, and the baby did not survive.

In May, a woman was held for hours in a tent in an Oppenheimer Park camp and repeatedly assaulted.

Janice Abbott, the CEO of Atira Women's Resource Society, said the woman had been “held captive in that tent for 15 hours screaming,” but no one did anything to help her.

“That’s how normalized it is.”

WISH, a non-profit that supports sex workers, said a street-based sex worker called the organization’s bad date line last week after she heard a woman screaming in a car while other people walked by.

“We want to see it happen right away,” said Alice Kendall, the executive director of the Downtown Eastside Women’s Centre. “We want to see a crisis response, the same way that COVID has created a national, provincial, municipal kind of co-ordinated response to ensure that all of the aspects of COVID are addressed, the economy as well as health.”

COVID-19 restrictions have reduced the number of spaces people in the Downtown Eastside can go to get warm and sheltered.

Especially when it comes to spaces that are safe for women.

Back in April, Kendall asked the City of Vancouver for help in creating a safe outdoor space as COVID-19 measures reduced capacity in the Downtown Eastside Women’s Centre.

But it took eight months before the centre got permits and help from the city to set up a patio space that’s still smaller than it sought.

This fall WISH opened Canada’s first shelter for sex workers, and efforts have been made to set up bathroom trailers in the Downtown Eastside.

But all the drop-in centres and shelters are full, while street homelessness has increased. 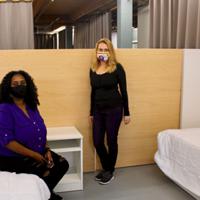 First Shelter for Sex Workers to Open in the Downtown Eastside

WISH, Atira and the Downtown Eastside Women’s Centre are calling for an immediate improvement in conditions.

But they also want governments to adopt recommendations from other reports like Red Women Rising and the federal Inquiry into Missing and Murdered Indigenous Women and Girls.

“Gendered violence continues, even within our own programs, because there are so few choices available for women and gender-diverse women in terms of housing, employment, income security, safe, appropriate services and other opportunities that allow women to keep themselves safe,” Abbott said in a press release.