WISH, the organization that will be running the 23-bed shelter, says this kind of shelter has been desperately needed for years.

But the need became even greater with COVID-19 restrictions that made life worse for many people dealing with homelessness and poverty and hit sex workers particularly hard.

As many services ceased operating or cut back hours and access in March, sex workers were losing income as clients stayed away. Shelters that provided housing were closing or reducing access. Access to meal programs was reduced.

And sex workers were facing increasingly difficult working conditions as supports were cut off.

More women turned — or returned — to sex work during the pandemic, Beyene said.

The only other shelter in Canada that caters to sex workers is located in a suburb of Montreal, and it’s for women who are leaving sex work.

“There are so few safe spaces for women and gender-diverse folks in the Downtown Eastside period. And then even fewer spaces that really cater to and are safe for sex workers,” said Beyene.

The shelter will welcome all self-identified women, including trans women, and will be open 24-7. Women won’t have to leave the shelter every morning, a rule in some shelters.

The shelter’s beds are ready, placed two to a cubicle, but it will still take four to six weeks before the space is ready to open. The new space is in the top floor of a building owned by the City of Vancouver that was used by the Vancouver Police Department for storage. Women’s organizations in the Downtown Eastside have been eyeing it for years for use as a shelter.

It’s right next to WISH’s drop-in centre at 330 Alexander St., a space that’s already used as a makeshift shelter by many women.

To create extra space to accommodate COVID-19 recommendations, there’s a covered outdoor area in the alley behind the drop-in centre and a bathroom trailer that was installed in May when many bathrooms in the neighbourhood were closed as part of lockdown measures. Beyene said the lack of bathrooms was particularly dehumanizing for women.

And because overdoses have also spiked this year, WISH has begun offering overdose prevention services.

During the first round of COVID-19 restrictions, organizations also had to stop accepting clothing donations, meaning that women were showing up at the WISH drop-in centre with nothing to change into. 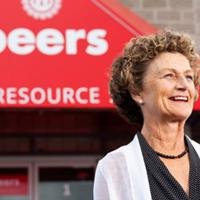 The new shelter has a laundry room fitted with three washers and three dryers. It seems like a small thing, but Beyene and shelter manager Cassandra Pynn say it’s an important part of keeping women safe and comfortable.

“Laundry is always a really critical piece and in the Downtown Eastside... even if there might be laundry next door, it might be totally overrun by men, and men they’re specifically trying to avoid,” Beyene said.

While services for unhoused people are mostly back up and running, there are still limitations when it comes to the spaces people can access throughout the day to rest, get food or use bathrooms and showers.

“My hope is that places stay open and that nobody’s funding is scaled back or cut it anyway,” Beyene said. “Because as dire as that period was, it would be just so tragic if it happens again.”