US cases could double before Biden takes office

In the U.S., the number of confirmed COVID-19 cases is likely to increase to more than 20 million in the next two months before president-elect Joe Biden takes office — almost double the current 11 million. The prediction is based on recent levels of physical distancing, which are about 60 per cent of normal behaviour. If distancing efforts are stepped up slightly, to 50 per cent of normal — the average seen in August — around five million cases could be prevented.

How smoking can make COVID-19 worse

People who smoke are at higher risk of severe COVID-19 because smoking disrupts the earliest stages of the immune response in the cells lining our airways. Using a cell culture model, researchers found that smoking blocks the activity of immune system messenger proteins called interferons, which play a critical role in the body's early immune response. Interferons trigger infected cells to produce proteins to attack the virus, summon additional support from the immune system, and alert uninfected cells to prepare to fight the virus.

Black and Hispanic patients accounted for more than half of all in-hospital deaths due to COVID-19 during the first six months of the year. There were no racial or ethnic differences in mortality rates for hospitalized people, but a disproportionate number of Black and Hispanic people became sick enough to require hospitalization.

These differences can be only partly explained by disproportionate rates of underlying medical conditions. A second study found that unconscious racial biases in a community can explain much of the racial disparities in COVID-19 infection rates seen in the U.S.

Researchers compared data that measured explicit racial attitudes (outright racism) and implicit attitudes (unconscious bias) — which are indicative of systemic racism — with data on the racial makeup and COVID-19 rates in more than 800 U.S. counties. They found that counties with more Black residents had higher infection rates, as did places with higher explicit or implicit biases. And the relationship between race and case rates was strongest when either kind of bias was highest. Unconscious bias was also linked to more deaths among Black people.

People who buy a gun during the pandemic are more likely to be suicidal than other firearm owners. A study has found that about 70 per cent of those who bought a firearm during the COVID-19 pandemic reported having suicidal thoughts throughout their lives, compared with 37 per cent of other gun owners. Pandemic buyers were also more likely to have unsafe gun storage habits. An estimated two million guns were purchased in the U.S. in March alone as the pandemic took hold.

Pandemics tend to be worse in densely-populated cities than smaller rural towns, and small towns generally want to keep it that way by restricting movement from cities. But a computer simulation of population movement and disease dynamics has found that while migration from big cities to small towns might be slightly less safe for the people in small towns, overall this migration reduces the density of highly-populated areas and is better for the majority of people. This migration results in reduced spread of the disease compared with intercity travel restrictions.

Having regular contact with nature may help mitigate some of the negative mental health consequences of the COVID-19 pandemic. A study in Japan found that frequent visits to green spaces, and the existence of green views through windows in the home, are associated with increased levels of self-esteem, life satisfaction and happiness, as well as decreased levels of depression and loneliness.

How fast and widely a COVID-19 vaccine can be manufactured and distributed is just as important as the effectiveness of the vaccine itself, according to new research. The willingness of the population to get the vaccine, and whether people continue to use masks and physical distance to control the severity of the pandemic while the vaccine is rolled out, will have a big influence on how well we control the disease.

A review of data on three human coronaviruses, SARS-CoV, MERS-CoV and SARS-CoV-2, has found that people infected with SARS-CoV-2 are more infectious early in their disease than those infected with the other two viruses, which explains why COVID-19 has spread more rapidly. The evidence indicates that people with SARS-CoV-2 are infectious for around nine days, and are most highly infectious in the first five days after symptoms appear. People who do not develop symptoms appear to be just as infectious, but the period of infectiousness may be shorter. These results highlight the importance of identifying and isolating cases early to contain the spread.

Test frequency and speed are more important than sensitivity 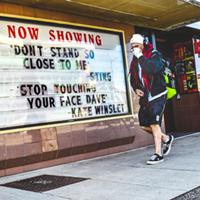 The Pandemic Could Bring a Wave of Measles. And More Science News

Large-scale, rapid and frequent COVID-19 testing could bring the pandemic under control within weeks, even if the tests used result in more false negatives than slower but more sensitive tests. Researchers found that test frequency and turnaround time are much more important than test sensitivity, because frequent fast tests can prevent infected people from continuing to spread the virus while they await their results, even if some cases are missed by the first test. This strategy could allow businesses to remain open by only requiring infected people to self-isolate.

The seafood industry in the U.S. has declined dramatically during the pandemic, according to new research. Between January and September this year, researchers found a 40-per-cent decline in fresh seafood catches, a 37-per-cent decline in imports and a 43-per-cent drop in exports relative to the same time last year. The industry was hit particularly hard because it is heavily reliant on restaurants for sales: restaurants usually represent about 65-per-cent of U.S. seafood spending.