Volunteers determined to provide warm showers for more than 100 people living in Beacon Hill Park’s homeless encampment in Victoria made another run at it this week, ending in a tense confrontation and an arrest.

They’d tried before, building a pair of shower stalls and arriving Nov. 7 to set them up, only to find the public water spigot had been removed by city bylaw workers to preempt their effort.

The city says the showers break regulations. The activists say sanitation is a human right, and they won’t be stopped.

And so, on Saturday, the shower struggle at Beacon Hill reached a new level of conflict.

This time, the activists had reinstalled their two showers tent with an 800-gallon water cistern, pump and solar panel — an upgrade that pushed the crowdfunded cost of the project over $3,000.

That was on Monday, Nov. 16, and for four days, people living in the park had hot showers. Nearby, a community care tent, also unauthorized by the city, offered first aid, food, naloxone, connections to peer supports, board games and shelter for those living in the park.

On the morning of Nov. 20, city bylaw officers and members of the Victoria Police Department arrived to shut it all down.

“Bylaw woke everyone up at 8 a.m. They put police tape up around the whole area, and if you tried to cross it, you were threatened with arrest,” said Shae Perkins, a harm reduction co-ordinator for AVI Health and Community Services who has been living in the park since the community tent was erected in late October.

City crews began taking down and impounding the structures. Advocates for the unhoused refused to move out of the way, there was a struggle, and one activist was arrested for assaulting police.

Support workers said they wanted to retrieve donations and personal property from the community tent but were not allowed. The dismantled showers, the tent and everything in it were loaded on a truck and driven away as volunteers and unhoused residents of the park watched and shouted in protest.

“It was pretty rough,” said Gina Mowatt, a local activist involved in building the showers. “They took the showers apart and threw them into a bin, and they poured out the 800-gallon cistern of water. They took it apart [the community care tent] and threw everything into a bin.”

Bill Eisenhauer, head of engagement for the City of Victoria, said what was confiscated will be stored by the city for the next 30 days unless the items are claimed.

The city has consistently maintained that the community-built showers violate city bylaws and the trust that governs the park.

“City bylaw officers and other staff have had numerous discussions over the past several weeks with the individuals operating these unauthorized structures to offer to assist with possible solutions, including exploring alternate locations outside the park where these could be established,” said Eisenhauer.

“These individuals have simply declined to work with us to find an alternative solution and really left us no choice but to remove the structures,” he said.

Victoria city councillor Sarah Potts was surprised and upset to hear about the raid.

She had been working with the volunteers who ran the showers and community tent, along with the city to bring the structures into compliance so they could continue supporting the unhoused residence of Beacon Hill Park, she said. A possible solution that was in discussion included moving the structures just outside the park.

“Council wasn’t made aware” of Saturday’s actions in advance, Potts said. “This came completely out of nowhere.”

The show of force by the city was “a bad move” that would set back her efforts to improve relations between the two sides, she said.

“A lot of the work that I’m trying to do is around building trust between communities who have been marginalized and criminalized by our current systems and trying to work together and create a new bridge that hasn’t always existed with the city,” said Potts.

Mowatt worries the city will wreck the showers, which were constructed by volunteers from plywood, sheet metal, rubber and plumbing fixtures.

“Often, the trend is that bylaw destroys things that they get their hands on,” she said. “That’s just from the experiences [that] unhoused people have had with bylaw taking their stuff when they’re not there.”

When the city’s truck arrived to take away the showers and tent, a crowd of people refused to move from its path and police attempted to physically move them aside, said witnesses.

“There were two or three people who were physically held back, pushed and shoved against the wall, and one person was arrested,” said Ella Martindale, who was on the scene.

The person arrested, who uses the pronoun they, told The Tyee they attempted to push an officer off of them.

A police spokesperson said the person was “arrested for assaulting a police officer and transported to cells,” then released, and an investigation is “ongoing.” 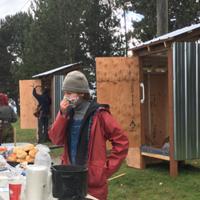 Volunteers Built Showers for Victoria’s Unhoused. They Were Left High and Dry

Video shows the arrested person on the ground surrounded by police, as their arms are cuffed behind their back. According to those close to the individual, the person had a pre-existing broken elbow and was admitted to the hospital for a scheduled surgery shortly after being released by the police.

Craig Turney, an organizer behind the shower build, said he has been in conversation with Mayor Lisa Helps and councillor Potts over council’s open applications for a $100,000 grant to provide hygiene services for the unhoused. Now he has doubts.

Saturday’s events make him “less inclined to work with the city,” Turney said. “It’s incredibly antagonistic and a violation of human rights law.”

Perkins said many people have offered food and support help in his group’s crowdfunded effort to bring showers to the unhoused community living in Beacon Hill Park.

“We’re going to take a few days to rest, recuperate and strategize, and then we’re going to come back stronger than ever,” he said.

“This doesn’t end the endeavour to have showers for the unhoused community in the area,” vowed Martindale. “However, it was a really rough morning, and it was more violent than I thought it was going to be.”