People arrived in Beacon Hill Park on Saturday ready to defy the law by installing two showers next to one of Victoria’s largest tent encampments.

Someone got there first to foil their plans. A water tap needed to feed the showers had been dug up, removed and filled in.

Victoria’s bylaw officers refused to comment, but there is little doubt they blocked the efforts of locals looking to quickly and affordably provide showers for unhoused people.

For now, the two disconnected shower stalls remain in the park with yellow posters on their doors citing the United Nations protocol for homeless encampments in Canada: “The denial of access to water and sanitation by governments constitutes cruel and inhumane treatment, and is prohibited under international rights law.”

The stalls bookend a previously existing needle disposal bin, a porta-potty, and a handwashing station that now, too, is unusable without a water source in the midst of a pandemic.

The showers were built by a community group last month for less than $1,000.

The same group is fundraising to build a mobile shower unit. So far, they have raised nearly $10,000, some of which they intended to provide as a stipend for individuals to clean and maintain the shower stalls.

But the city has so far said no. Victoria head of engagement Bill Eisenhauer said the city previously reached out to the group to take them through the official permit process, with no success. “The structures are not authorized to be in the park or to be operated. The group’s refusal to work with us leaves us little choice but to enforce the existing rules.”

“I don’t know what else we can do,” said shower project co-organizer Craig Turney. “The city has access to all the water, and they can just shut it off even if we moved it somewhere else. It is the most basic need, access to water and sanitation.”

The group looked into rigging up showers using rain barrels donated by the North Park Neighbourhood Association. But that can’t work in Beacon Hill Park without a pump or electricity, Turney said. “Now, I think the thing is to put pressure on the city to turn the water back on.”

Coun. Sarah Potts said bylaw officers act independently of council, and that she expects they turned off the water temporarily in anticipation of the showers being installed.

“An unpermitted structure would be in contravention of the bylaw, as well as the trust that dictates the use of Beacon Hill Park,” said Potts.

She added that water is still available at the main park bathroom.

In their effort to meet the needs of unhoused people, council approved additional support for the Our Place Society community centre to expand availability for their public showers to 13 hours daily. Council also approved a motion to provide free bus fare to unsheltered individuals to help them get to showers located downtown. 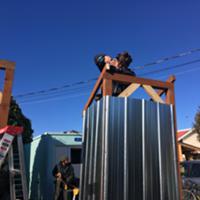 In Victoria, This Group Won’t Wait for Approval to Build Showers for the Unhoused

Tla’amin Nation matriarch Rose Henry, who meets weekly with those living in local encampments and was an important force behind the creation of the shower stalls, said leaving encampments to use showers isn’t feasible for all unhoused people. Some have come back to discover their belongings stolen.

“It’s a shameful black eye on Canada and on the City of Victoria for allowing this to get to this point, but the community is rising up,” she said.

Potts said finding a solution for accessible showers has been a frustrating challenge for the city. “If it was easy, it would be done.” She listed a number of logistical and legal obstacles. “I know everything feels too slow, too late.”

On the same day the community group failed to hook up their showers in Beacon Hill Park, council announced a proposal containing several measures aimed at housing the estimated 250 people currently living unsheltered in Victoria. As outlined in the motion, the city would aim in conjunction with the province to move all unhoused people indoors by March 31, 2021.