Three months ago, the part of Vancouver that includes the Downtown Eastside had the lowest number of COVID-19 cases in the city.

But it now has the highest rate, according to data from the BC Centre for Disease Control. The local health area, which includes the Downtown Eastside, Strathcona and part of Grandview-Woodland, also has the lowest incomes and lowest life expectancy rate in the city.

The growing rate of COVID-19 is a concern for residents who live in single-room occupancy hotels in the Downtown Eastside and Chinatown, and the housing providers responsible for managing those buildings.

Since the beginning of the pandemic, people who live and work in the Downtown Eastside have feared an outbreak in shelters or SROs, where residents often have pre-existing health conditions and live on very low incomes.

But there were few cases in the neighbourhood during the spring and summer, and many residents were more concerned with the soaring number of overdose deaths triggered by COVID-19 precautions.

But in September, COVID-19 cases in the neighbourhood began to tick upward.

Alicia Williams lives at the May Wah Hotel, an SRO building in Chinatown. She explained that “it’s pretty much impossible to isolate in an SRO.” Each bathroom in her building is shared by around 20 tenants, and residents also share kitchen facilities and are not allowed to keep a hotplate in their rooms.

Williams stayed at her boyfriend’s place while she was waiting for the results of a COVID-19 test this summer after she had been exposed to a friend with the virus (she ended up testing negative).

“I’m really lucky to have that kind of option in comparison with a lot of people l live with, like seniors,” Williams said.

Williams said some of her neighbours take the virus seriously and wear a mask when they’re in common areas of the building, but others don’t believe it’s a real threat. She has avoiding going outside and, as the weather gets colder and wetter, dreads the idea of riding the bus.

People who live in B.C. have been told to wash their hands frequently, stay at least six feet apart from others and wear a mask. As the number of cases have surged during the fall, health officials have asked British Columbians to reduce the number of people they have contact with.

But many of those measures are difficult or impossible to do in the cramped and inadequate housing that is common in the Downtown Eastside and Chinatown.

Janice Abbott, the CEO of Atira Women’s Resource Society, said buildings that her organization manages had zero cases until September. But since the beginning of September, 81 people have tested positive for COVID-19.

Of those, 32 have been staff who work in buildings or other programs Atira operates, and 49 have been tenants. Abbott said Atira has also tracked “clusters” of cases among tenants in certain buildings.

“It feels like we’re getting some number of new cases almost every day right now,” said Abbott.

Tanya Fader, director of housing for PHS Community Services, said it’s a challenge to find space for SRO residents to quarantine. She noted that cases in the Downtown Eastside rose at the same time that cases in the rest of the province started to go up, and after people had returned to downtown Vancouver to shop and work after staying away for much of the spring.

Abbott said Vancouver Coastal Health has quickly provided testing to buildings when someone tests positive. Building residents who test positive can stay in a hotel operated by the health authority.

But sometimes there’s no room in the hotels, some residents don’t want to leave their homes, and some aren’t able to self-isolate because they have a condition like dementia. In those cases, building staff do the best they can to keep everyone safe, Abbott said.

Atira has gone so far as to buy portable toilets to help some tenants self-isolate in buildings with shared bathrooms. But Abbott’s fears have only grown as research has shown that COVID-19 can be spread through airborne transmission. Many SRO buildings are over 100 years old and have poor ventilation, with windows that don’t fully open.

PHS also operates shelters and does outreach work to a tent city in Strathcona Park. Shelters are operating at lower capacity to try to prevent COVID-19 transmission, but that means there are 379 fewer shelter spots open this winter compared to 2019, according to the City of Vancouver.

At the same time, the number of unhoused people has risen during the pandemic, as housing providers have limited guests, people have lost work and services for homeless people have been reduced.

Fader said she was concerned that more people will be left outside this winter.

“The longer that people are outside, the unhealthier they are,” Fader said. “We’ve seen that in pneumonia and influenza.”

A survey conducted by the B.C. government showed that low-income people and racialized people are bearing the brunt of the pandemic, with steeper losses of income and work, more food insecurity and more difficulty accessing health care.

The local health area that includes the Downtown Eastside, Strathcona and part of Grandview-Woodland has a total population of 71,000 people. As well as having the lowest incomes and the lowest life expectancy among Vancouver neighbourhoods, the area also has the highest rate of Indigenous residents and the highest rate of seniors living on low incomes. 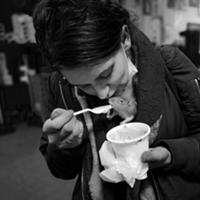 Abbott is calling for more information about the uptick in cases to be provided, so that residents can make informed decisions about how to keep themselves safe, as well as more accessible testing.* Since early September, organizations have been calling for more transparency about COVID-19 cases in the Downtown Eastside.

“I think more transparency is critical, while at the same time recognizing the risk of stigmatizing people and stigmatizing the community and the buildings,” Abbott said. “But information is power, and people need to know what’s going on so they can make good, informed decisions about what’s going on.”

Fader agreed that people need to be given the information they need to be safe, but she warned that stigma can also make it harder for people to get the treatment they need. Many residents are already dealing with stigmatized conditions like addiction and mental illness.

“We don’t want the Downtown Eastside to be seen as the source of contagion,” Fader said.

*Story updated on Nov. 20 at 10:50 a.m. to clarify that Janice Abbott is not asking for data about specific buildings to be released.