A Vancouver builder is urging the city to take a look at building what he calls “tiny townhomes” on small vacant lots throughout the city as one possible solution to rising homelessness and persistent tent cities.

Bryn Davidson, the owner of Lanefab Design/Build, normally spends his days designing and building laneway houses in Vancouver’s single family home neighbourhoods. But he recently sketched out how to fit 10 tiny homes on a typical residential lot.

Davidson is suggesting the idea would be a better use of land than the community gardens currently set up by developers to get tax breaks while they wait to build on land they own. He says the model is more like “tiny townhomes” than stand-alone houses, so more units can fit on one site.

The idea is based on another successful project in Portland, Oregon, originally called the POD Village and now known as Kenton Women’s Village. That community started out as a collection of temporary “micro-housing sleeping pod(s) designed by local architecture firms.”

“I thought it was interesting because it was this sort of in-between stage between full permanent housing and tents, where you have these things that are quite simple, but the people that were using them seem to be quite happy with that,” Davidson said, explaining that the tiny living spaces would be between 100 and 140 square feet and residents would have access to a “comfort station” that would include toilets, showers and sinks.

“And then eventually they move on to permanent housing.”

The Tyee has been exploring whether tiny homes could be part of the solution to homelessness in Vancouver. Tiny home communities are common in many American cities and have started to catch on in Canada as well. They range from self-governing communities that have built rudimentary homes, to sites built and run by non-profit agencies.

City of Vancouver staff have said tiny homes so far are not an option the city is considering because there are few sites in the city that would be suitable.

“If we were to explore the option of tiny homes we would be impacted by the lack of large, affordable development sites that are available and we would also need to consider whether the tiny homes meet our land use and building bylaws,” communications staffer Ellie Lambert previously wrote to The Tyee via email.

The city has also so far nixed the idea of a sanctioned tent city, where basic services like bathrooms and running water would be provided, saying it prefers to focus on housing people in shelters or supportive housing. 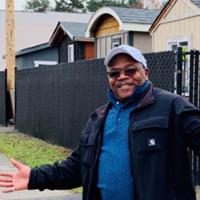 But faced with a community outcry over the city’s latest tent city in Strathcona Park, Mayor Kennedy Stewart has opened the possibility of “establishing a temporary emergency relief encampment on vacant public or private land.” Stewart is proposing staff study the idea along with two other options: leasing or purchasing hotels and SROs, or temporarily converting city-owned buildings into emergency housing.

Davidson acknowledged the units he’s describing are very basic, but they would provide more security and comfort than a tent, and shared washrooms and showers would be a step up from the park bathrooms shared by the approximately 200 to 500 people currently estimated to be living in Strathcona Park.

Each unit would cost between $10,000 and $15,000, Davidson estimates. Units could be placed on top of vacant sites without much ground preparation, because they don’t require foundations. Davidson estimated the sites could be built out in as little as one month, depending on how much infrastructure is included.

He added that developers and other land holders could be offered some sort of incentive, like tax savings or a break on Vancouver’s Empty Homes Tax, to put the temporary structures on their land.

City bylaws would also have to be changed to allow for temporary housing that doesn’t have its own kitchen and bathroom, and to allow housing unit sizes smaller than the city’s current minimum size. (The units Davidson is proposing are around the same size as a room in a single room occupancy hotel, a common form of low-income housing in Vancouver).

Davidson suggests the city just try the idea, and then talk with residents about what’s working and what’s not.

“If people think it's a problem, let's build 50 and then ask people what they think of it, you know?”