As soon as the homeless camp at Vancouver’s Crab Park was shut down, a new one emerged at Strathcona Park. Same old, same old. The city clearly is not thinking boldly about what really needs to be done to house homeless people rather than endlessly send them from one makeshift spot to another.

Strathcona residents who have committed decades of effort and love to a previously disparaged neighbourhood are justifiable concerned. They are calling for the city to provide a permanent camp, but not in the very centre of their neighbourhood.

Those who have set up camp understand, but what choice do they have? They have to sleep somewhere.

This is a problem we have ignored for too long, while municipal leaders have shifted the blame to other levels of government. It’s time to wake up and follow the lead of other similarly stressed cities. It’s time to build “tiny home” encampments for homeless people.

In so doing, we’d be late to the game. Dozens of U.S. cities, confronted with similar public failures to address their most obvious manifestation of general social inequality, have sponsored “tiny home encampments” — encampments that provide basic levels of shelter, hygiene and community services. A list of many runs at the end of this piece.

Here is why they are being embraced. For a tiny fraction of the $150,000 cost per unit of Vancouver’s own modular housing approach, city agencies and non-governmental organizations have provided a roof, a lockable door, electricity and sanitary facilities for homeless people.

Residents are afforded safety, privacy and an escape from the elements — three attributes those who now live in tent cities desperately need.

The city of Seattle now has 10 tiny home villages, each accommodating between 50 and 100 residents. A random review of just one of these villages is sufficient to shatter all preconceptions. Othello Village hosts 60 residents: 16 women, 32 men, 12 children, nine couples and six families. The projects have been successful enough that King County, Wash. approved the creation of 40 more tiny home camps this year.

The tiny homes solution across the U.S. came out of frustration in the face of a dramatic rise in the number of homeless people in cities, a population that increasingly includes women with children. The absence of secure social housing units and the unwillingness of state and federal governments to step in created the inevitable result: the emergence of tent cities. Sound familiar, Vancouver?

Housing advocates in those cases faced a choice. They could keep people on the streets waiting for social housing paid for by higher levels of government — housing that will likely be decades in coming, if ever. Or they could just do something. Something quick and effective. They could put roofs over the heads of endangered citizens using whatever means necessary.

The movement is not without controversy. Critics say moving people into tiny homes signals defeat. That such tight quarters are not worthy of the name “home.” That this is how shanty towns get started. That tiny home communities will bring drugs and crime to adjacent neighbourhoods.

Housing advocates such as Barbara Poppe, who headed former U.S. president Barack Obama’s federal response to homelessness, seems to be on the side of angels when she asks: “Why would we accept that people should be living in huts that don’t have access to water, electricity and sanitation?”

But here’s a twist. Poppe was hired by former Seattle mayor Ed Murray whom she advised to kill the tiny homes program. He ignored her advice and instead opted to fund its expansion.

Because at the end of the day, waiting for the perfectly equitable outcome inflicts, in the meantime, needless risk and misery on people without homes.

And let’s unpack the myths promulgated by foes of tiny homes as a short-term solution to homelessness.

Actually, the tiny homes do have “access” to basic necessities. Depending on the budget, they can have bathrooms, kitchen facilities, electricity and heat inside the home.

Many cities save money, though, by providing homes without interior plumbing or integrated heating systems. In this version, showers, kitchens and sanitary facilities are provided on site in shared facilities.

And no, it’s not unseemly to imagine people living lives in so small a space. These homes, at about 250 square feet, are about the size of a medium-sized RV.

Sites for clusters of tiny home sites can be as small as 4,000 square feet, the equivalent parking lot area needed for 10 cars. There are dozens of suitable sites around Vancouver, which have municipal services (sewer, water, electricity, internet, transit) and are reasonably removed from residential areas.

An important feature of most tiny homes communities is that they are secure. Villages are typically enclosed, and residents alone have gate keys. Management is usually shared by residents with the resident group having a say in how the community is controlled. Inevitably (but apparently more rarely than you might guess) there are personal conflicts between residents, and it seems to be effective to let the village make decisions about the community. Management models vary but typically include a social service agency acting as overall manager, answerable to a resident/community board.

We could do this. In less than a year, Vancouver could deliver tiny homes sufficient to house those now camping in our parks, and more people in need as well.

Do not be surprised to find this approach to serving the homeless costs far less than governments and charitable organizations are currently committed to spending. In fact, Seattle maintains that the cost of the tiny homes per person is only about one-third what it costs to house people in shelters.

Do not be surprised to see that tiny homes prove far better than shelters by many other measures. Shelters, unlike homes with a lock on the door, require those who stay to vacate every morning, provide far less personal privacy and safety, and make possessions easy targets for thieves.

Do not be surprised if tiny homes communities become springboards for success for their residents. Research has proven that a housing-first response can stabilize people’s lives, allowing them the physical and psychic room to address mental health issues, train for a job and interact productively with social service support workers.

If we instinctively say no to this, we are being miserly and callous. There is no other way to interpret a lack of political will to investigate this option working so many other places. Consider this math. Assume a price below $10,000 for each tiny home and a one-year target of 500 homes. Total bill: under $5 million. That is not much over the price of two, large detached residences in Strathcona. That is about one-third of the cost of the new half-block public park presently under construction in Yaletown.

If we decide to look for that kind of money, there are obvious places to find it. Some existing tiny home projects are entirely government funded. Others are paid for by charitable organizations, individuals, churches or some combination.

If you’ve read this far, you can no longer assume that there’s just nothing to be done about people sleeping in the doorways or parks of Vancouver. It’s no longer credible to sigh and say with a shrug that this is one of most expensive cities in the world, so some people just will be homeless, since neither they, nor we, can afford to put a roof over their heads.

If you’ve read this far, you have proven you care enough to learn about a proven solution. Tell the mayor and council of Vancouver to either implement a tiny homes initiative to end homelessness in their city or make a detailed case for why they won’t. Tell them there is no need to kick this problem upstairs to the provincial and federal levels of government. The city has the land. The money needed is relatively small. Let’s provide these men, women and children safe refuge as soon as we can by whatever means necessary.

We need not accept tiny homes as a long-term solution. If more permanent fixes come along this decade, fine. But this is something we can do starting Monday.

HERE ARE A BUNCH OF BUILT TINY HOMES PROJECTS 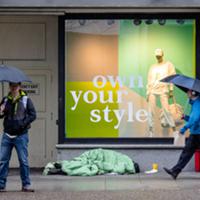 No Rest for the Homeless

In high-priced Silicon Valley.
In struggling Detroit.
In Los Angeles, where the mayor has declared homelessness a crisis.
A quite inexpensive approach in Eugene, Oregon.
And another low-cost initiative in Denver.
A pricier version in Kansas City for military veterans only.
These in Springfield, Missouri lean towards the more expensive end, but residents pay $300 a month from welfare.
These in Austin, Texas are in the medium price range, with no bath or kitchen, but are well-detailed.
Here’s a tiny homes project in Oakland, California, just for teens.
The idea for this Portland, Oregon project is to put tiny homes in the backyards of kind-hearted homeowners.
And here’s another Portland tiny homes community that reflects the city’s prized informality.
And in Kansas at-risk youth gained job skills by building a tiny house duplex on wheels.

The Tyee followed this with two reported pieces. Read about Seattle’s experiences with tiny homes communities here. Read about the city of Vancouver’s initial response to the concept here.