Although four years have passed since Eric Davis was living in a tent, he still distinctly remembers the moment he moved into his tiny house.

“You feel like you’ve got your own home,” he said. “There’s no leaves, there’s no wind blowing. The tent isn’t about to crush you from the snow weight or the rain soaking up the tent walls. It gives you that sense of dignity again. You know God didn’t forget about you.”

Davis is the co-founder and special projects manager at Camp Second Chance in West Seattle. The tiny home village was formally established in April 2016 after Davis and 24 other residents split off from another group of people living in a tent city. Using donated materials and public land, they were able to build a community of tiny homes that could provide heat, a locked door and shelter.

Since then the camp has grown to more than 50 residents, according to their website. Running water, toilets and a communal cooking area are all available onsite. The area is protected by residents on security detail who must take a watch shift at least twice a week. No drugs or alcohol are permitted, and residents are required to be sober in order to enter the gates. Participation in community meetings is also required.

Case managers provided by the Low-Income Housing Institute work from the camp in order to help unemployed residents find employment, make appointments, or apply for identification, amongst other services. Onsite case managers are also essential to getting people into permanent housing, according to LIHI executive director Sharon Lee.

“Tiny homes have been terrific in terms of stability,” Lee said. She explained that it can be very difficult for clients to meet with case managers if they don’t have a consistent, reliable way to make appointments. Bringing case managers directly to residents in their tiny home villages eliminates that barrier for them.

Davis noted the importance of having onsite case managers, “it’s the key to helping people out.”

Studies from the University of California at Berkeley, too, show that tiny home villages in California have been successful because of the supportive services such as case management offered at similar types of facilities.

Camp Second Chance is one of 12 tiny home villages in Seattle right now. Nine receive funding from the city. In February of this year, Seattle City Council approved legislation introduced by councilmember Kshama Sawant that would allow for the expansion of up to 40 villages throughout the city. Lee said two of those will be under construction within the next month.

Other legislation to expedite the construction of villages has been introduced previously as well.

Democratic state Sen. Joe Nguyen proposed a bill at the Washington state legislature in 2019 to exempt villages from the State Environmental Policy Act requirements, meaning that sanctioned camps could be established more quickly because they would not have to wait on permits from local jurisdictions. The legislation passed in the senate but ultimately failed to pass in the House. Nguyen said he believes the reason the bill didn’t pass the House fully was because of the misnomer that homeless people are inherently dangerous and the inability by some to distinguish between sanctioned and unsanctioned camps.

“The negative stuff was largely out of fear and ignorance,” said Nguyen. “It had to do with whether they would be sited near a school or if they allowed alcohol or drugs or not.”

While different villages may have different rules regarding drugs and alcohol, Lee and Davis both agree that the tiny homes villages have been a huge success across the board. According to Lee, tiny homes are “a bridge to permanent housing.”

“For very little cost we are setting up villages that are housing hundreds of people including families with children, seniors, veterans and people with pets,” she said. “We’ve moved over 800 people into permanent or long-term housing.” Data collected in 2018 and analyzed by LIHI showed that 56 per cent of tiny house exits resulted in permanent housing, far beyond the success rate of exits from emergency shelters or enhanced shelters. Lee noted that one tiny home costs about $2,500.

Additionally, tiny home villages have been successful so far at avoiding any COVID-19 outbreaks. Lee and Davis both said this is because people have space to properly social distance, and the community members have taken careful precautions in communal areas such as the kitchen or dining room.

For all the successes of the villages, however, Sen. Nguyen stressed that tiny homes are only one option and it’s important to remember that they are only meant for short-term solutions to homelessness.

“We have to acknowledge that this is a band-aid solution and not an actual long-term solution,” he said. “We need to relieve the pressure but if we relieve the pressure too much people may forget these folks are in fact homeless and need help.” He added that the most successful camps he’s seen are the ones like Camp Second Chance that have their own self-governance model and provide case management services.

“You can’t just plop a tiny house village anywhere and think it’s going to work,” Nguyen said. “It works because they have a small but mighty group of people who are very committed to making it successful.” 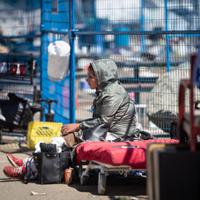 Davis also had some recommendations for other areas considering the idea of using tiny home villages. Any county with residents experiencing homelessness should look into operating a tiny house village, even if it’s just a pilot program, he said.

“Keep it small in the beginning so you can learn and understand it and see if it’s a good fit for your community. You never want to open up something large without trying it small first, especially with homelessness,” emphasized Davis. According to him it is also important to consult those with experience building tiny home villages before creating any new sites.

For Davis, the successes he’s seen from tiny house villages have compelled him to keep building new facilities. As of this writing, Davis has been busy moving and expanding a site in Tacoma, about an hour south of Seattle. The facility is increasing from 22 homes to 50 homes. Any more than 70 people at one site and it starts to become unmanageable, he explained.

“I love to see people happy. They blossom,” Davis said. “Coming from an environment where they thought they were nothing, they lost hope — I want to let them know they are somebody. When you work as a community it works better because there’s strength in numbers.”

On Wednesday The Tyee’s Jen St. Denis canvasses local experts and city hall about what it would take to bring tiny homes for the homeless to Vancouver.