If a political party pays a user of an online platform to post an advertisement that lies about a politician’s position on an issue, that is not a problem for the Commissioner of Canada Elections.

And as long as the commissioner decides fewer than 100,000 people saw the misinformation, the person or group behind the false ad is not legally required to be on the registry of political advertisers during an election.

How did the commissioner make sure fewer than 100,000 have seen the ad? That’s not for the public to know.

That’s the word from the office of the Commissioner of Canada Elections, 10 months after The Tyee filed a complaint about an ad posted during the last federal election to WeChat, which falsely claimed that Justin Trudeau would legalize hard drugs if re-elected.

The ad ran in English, French and Chinese languages.

The existence of the advertisement was reported by the CBC on Oct. 14, 2019. The Tyee filed a complaint the same day in order to see if a federal investigation could turn up more information and in order to test the Elections Canada complaint system.

The Commissioner of Canada Elections usually launches investigations in response to formal complaints, though the office can also initiate probes of its own accord or by referral from Elections Canada.

Conservative party communications manager Hamish Marshall at the time refused to say whether the party had paid for any ads on WeChat last election when asked by CBC.

But the ad itself visibly indicated Conservative party connections and now the investigation by the Commissioner of Canada Elections confirms the Tories did indeed contract with an individual user of WeChat to post the ad on the platform.

That’s about all the investigation report reveals, leaving a number of key questions unanswered.

The commissioner’s office does not identify the user paid by the Conservative party in the report from its investigation and refused to share the name with The Tyee.

The office said it also would have kept secret that the Conservative party placed the ad, except a tagline in the ad identifies the Conservatives — something made public by the original CBC story, said Michelle Laliberté, spokesperson for the Office of the Commissioner of Canada Elections.

Nothing will be done to punish the Conservatives or the person posting the ad for not registering as political advertisers because the commissioner decided the false ad wasn’t seen by enough people. Recent changes to the Election Act for online ads specified that placers of advertisements on sites in languages other than English or French that receive more than 100,000 visits on average per month must register.

“The official account on which the ad was displayed did not meet this minimum threshold,” said the office of Commissioner of Canada Elections.

Asked by The Tyee how the commissioner could be sure fewer than 100,000 people saw the misinformation in this case, Laliberté said that was a secret. “The commissioner and his staff are subject to strict confidentiality provisions that prohibit sharing details of our work.”

By using an individual user of WeChat to post the ad, the Conservatives appear to have sidestepped the requirement that “platforms” must register their political ads with Elections Canada.

Elections Canada defines a platform as "an Internet site or Internet application whose owner or operator, in the course of their commercial activities, sells, directly or indirectly, advertising space on the site or application to persons or groups."

There are sufficient WeChat users in Canada to necessitate the registry. But the commissioner treated the ad not as one sold by the platform, but by the single poster.

Duff Conacher, co-founder of Democracy Watch says the ruling shows how many loopholes are left in elections laws.

The “ridiculously high” threshold of 100,000 online viewers before registering must be lowered, said Conacher. Elections in ridings can regularly be determined by margins of single percentage points, Conacher points out. A post seen by 100,000 reaches a larger population than in most entire federal ridings. As such, a posting could easily change the winner of an election without meeting the threshold.

Political advertisers have become sophisticated at using tools on social media platforms to send customized ads to smaller audiences, and are ramping up the practice, which would evade the 100,000 threshold.

The other loophole, says Conacher, is paying individuals on platforms to post ads, which obscures how many people end up seeing the ad.

Election laws against misinforming voters should cover any and all postings, says Conacher. Further infrastructure needs to be put in place to order election lies removed from social media in “real time,” he said.

The Liberals made enforcement of false and misleading statements that affect elections much weaker, said Conacher, by limiting what it means to publish a “false statement to affect election results.” Recent revisions of the Election Act named for enforcement misinformation about “citizenship, place of birth, education, professional qualifications or membership in a group or association of a candidate.” 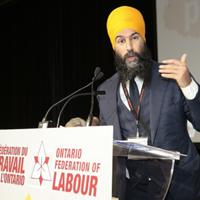 The law used to include a broad definition of statements about “character,” said Conacher. He also suggested that social media users should not be allowed to register anonymously. Instead, whistleblower protection should be strengthened in the country to cover anyone with a valid reason for fearing reprisal by powerful interests.

In January 2019, G7 member nations created a separate “rapid response mechanism” organization to deal with foreign elections interference and disinformation. The organization was set up to be able to make announcements quickly to address foreign interference and disinformation, so that it can be addressed during the election itself to minimize damage.

The mechanism appears to have been little used in Canada other than a report which found “suspicious” activity related to Jason Kenney’s United Conservative Party during a provincial election in Alberta. The report found strong indications people aligned with the party were creating fake social media participants and using those automated “bots” to troll other sites critical of Kenney’s campaign.

Story updated Aug. 26 at 9:30 a.m. to correct a reference to Elections Canada to the Commissioner of Canada Elections.