What Is Attorney Cocktail and who are the people behind it (assuming they aren’t just robots)?

That’s the question The Tyee has chased down a hall of mirrors with lots of dead ends.

So far we’ve demonstrated one concerning fact. Clickbait stories advertised on some of the world’s largest news sites are so shadowy that no one is home when you try to hold them accountable for publishing fake news.

Which may mean headaches for a new task force created to solve similar puzzles in the October federal election.

This saga began on Feb. 5, when The Tyee noticed an advertisement below a Vancouver Courier newspaper story with a photo of the federal NDP leader claiming “Jagmeet Singh Shows Off His New Mansion.”

Clicking on the ad led to an article headlined “13 Super Luxurious Celebrity Houses — They Surely Know How to Spend Their Fortune” posted on a website called Attorney Cocktail.

Attorney Cocktail offers a mixture of articles loosely related to the law and celebrity. Anyone with the stamina to click to page 145 of the mansion article landed on one with the false headline “Jagmeet Singh — $5.5 Million, Canada” but, unlike other pages, no body text. We discovered Singh’s picture had been swapped in to replace a photo of country music star Blake Shelton. Next to Singh are photos of an opulent Hollywood mansion that, in other versions of the page elsewhere on the web, Shelton is said to have rented.

Singh, who doesn’t hold a seat in the House of Commons as a federal election looms, is currently running in the Burnaby South riding byelection and his platform includes affordable housing. The fake ad and story could damage his appeal to those who lean towards voting NDP but against politicians who own “super luxurious” mansions with elaborate balustrades and murals painted on ceilings.

The Tyee’s story about this led to coverage by the CBC and the NDP has asked Canada’s Commissioner of Elections to investigate.

The mansions article with Singh inserted appears to have been published first in December. Ads for it have appeared on sites for the History Channel and the Independent newspaper in the U.K. as well as the Courier. One person claims to have seen one on Huffington Post’s politics section. Such ads can be micro-targeted by geography and reader interest. They can, however, appear and disappear with each page refresh, making them difficult to trace unless someone does a screen capture. Like this:

So who is behind the mysterious fake ad and story?

We tried to send a message to Attorney Cocktail through the contact page on its site. That failed due to the site’s broken software. We sent an email to the only address we could find, info@attorneycocktail.com. The email returned to sender.

We spoke with Adam Singolda, CEO of Taboola. He heads the huge online network that serves ads for Attorney Cocktail and other sponsored content to the Vancouver Courier along with big news brands including MSN, Bloomberg, NBC and others, creating 20 billion views a day, according to Taboola.

Who owns Attorney Cocktail, we asked Singolda. A client, he affirmed, but nothing more.

We asked Singolda to help us get in touch with Attorney Cocktail by giving us the owner’s name and further contact information. He refused. “In addition to our contractual obligations, as you can imagine, there are basic data protection laws in place with which we must comply.”

He did provide us the same email address for Attorney Cocktail that bounced back.

Singolda has written on Taboola Blog that his company takes fake news seriously and has put in place “disciplined processes to assure our mission would not be corrupted by tricksters, deceivers and manipulators who inevitably appear to game every new advertising and distribution channel that emerges.”

Human beings at Taboola review all ad content before it is uploaded, Singolda writes in the blog post.

But in the case of the Singh fake ad, Taboola apparently did not know about it until after The Tyee made its inquiries. Taboola didn’t block the ad until then. “We stopped this campaign immediately (within hours),” Singolda told The Tyee by email. “We contacted our POC there and advised them that this content is a violation of our policy.” POC in business lingo stands for Point of Contact (a term which, interestingly, does not necessarily indicate a human being).

Did Taboola receive a response from Attorney Cocktail, we asked, indicating a real person was there to take responsibility and act on such information? Singolda did not say.

The ad “was removed from the Taboola network as of yesterday (Feb. 5), and for good,” Singolda said.

He emphasized that Taboola employees “review content day and night, looking for things that can violate our policy,” adding, “It does not mean we can't miss things [or] make mistakes, but when we do, we fix it.”

The Attorney Cocktail article including the fake Singh page carries the word Jagmeet in its URL. Several other versions of the entire article, such as this one, exist and feature a different celebrity name in the URL and different celebrities on 140-some pages.

Intriguingly, Singolda’s blog post includes this: “We also fight “cloakers” (i.e. advertisers who submit content that looks legitimate at first but is later replaced with fake content in certain geographies where we don’t have employees or it’s not easy for us to spot their toxic game). But we do find out about it eventually and we fix it ASAP.”

In the fake story about Singh, his page was the last of 145 in the Attorney Cocktail article and seemed tacked on, lacking body text like all the others. Later in the day, a page 146 had been added, also without body text, about radio host Howard Stern’s supposed mansion.

Compared to the Attorney Cocktail article, and certainly its page 145, vastly more people saw the ad urging people to read it. And that ad falsely used a striking photo of Jagmeet Singh saying he wanted to “show off his new mansion.”

The Tyee asked Taboola’s CEO who decided to put Singh’s face in the ad for a story featuring 145 others, most of them far more famous beyond Canada’s political world. The client uploads the “thumbnail” Taboola’s platform, Singolda said.

Could Attorney Cocktail’s article have been hacked? Singolda said he did not know.

Who owns Attorney Cocktail’s domain name? We found a deliberately hidden registrant purchased it from the domain name service namecheap.com. The domain points to a server in California on Cloudflare, a company that can obscure the location of web servers from the public.

When Taboola decided to stop serving ads for the Cocktail Attorney fake story, that didn’t mean the story itself was gone from the web. The article remained live and able to be circulated through social media for two days more before the URL returned “not found.”

Meanwhile, a commenter in a Reddit thread discussing the Tyee report noticed that the name of the article author on Attorney Cocktail is also on articles on other similar websites. The same author name is found on the site of a web development firm in Pune, India, called Inventive SMi. The Tyee reached out to the potential author on LinkedIn but did not hear back.

Singolda did not reply when asked if Inventive SMi, which also lists an office in New Jersey on its website, was a client.

Hiding in the cyber shadows

What emerges from all this chasing around is that the huge ad networks placing sponsored content clickbait ads on credible news sites are a thin, porous line of defence against fake news. 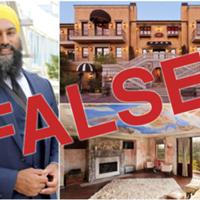 Fake Story about Jagmeet Singh Pops up on Vancouver Courier Site, Others

And that despite Taboola’s claimed efforts to police its clients, ad services like it are vulnerable to “cloakers” who can insert false information in sponsored content.

And that holding shadowy actors like Attorney Cocktail accountable, or even reaching them and talking to a real person, can be beyond the means of citizens, including reporters.

The Tyee broke its story of potential election meddling with false information days after Canada’s federal government announced it was creating a fast response team with a “Critical Election Incident Public Protocol” to pounce on such threats. The team is for the general federal election and does not cover by-elections, Natasha Gauthier of Elections Canada told The Tyee.

It is not clear whether the maker of the fake Singh ad has broken the law under Bill C-76, which came into effect Jan 19, and which the government says is intended to crack down on false statements about candidates. The bill forbids false statements concerning the “citizenship, place of birth, education, professional qualifications or membership in a group or association of a candidate” or claims that the candidate has broken laws.

Whether lying about a candidate owning a mansion applies and should trigger an investigation would be up to the Commissioner of Elections to decide, Guathier said.

Also under Canadian law, anyone who spends more than $500 in election advertising messages — those that promote or oppose a candidate — must immediately register with Elections Canada as a third-party, said Guathier.

That’s unlikely to happen any time soon in the case of whoever is secretly pouring out Attorney Cocktail content.