The City of Vancouver has decided to go ahead and provide free menstrual products in three washroom trailers set up around the city after a one-month pilot project.

The city confirmed the move in a statement from the city manager’s office this week.

The trailers were installed in May with the purpose of providing a safe space for “people, particularly women, 2SLGBTQQIA and gender diverse residents and those that are homeless or living in precarious housing to have access to safe and hygienic facilities and supports.”

The washrooms are part of a wider effort to serve vulnerable people during the coronavirus pandemic and are monitored by peers from Wish, RainCity Housing and the Overdose Prevention Society.

Bligh said she’s proud of the city for taking this on and in such a timely way.

“It’s such an important equity issue, it’s a safety issue, it’s an issue about destigmatization and really supporting vulnerable folks who needed that type of support, especially during the COVID pandemic and beyond,” Bligh said.

“It was a way to support all people that experience menstruation and may find additional complexities around hygiene and how it related to the COVID closures.”

Srinivasa is a second year UBC student in the global resource system program, where she specializes in global health. She’s also a member of Free Periods Canada, a group at UBC working to eliminate period poverty.

“We’re a grassroots menstrual equity group in Vancouver, focused on the distribution of menstrual products and initiating conversations about period poverty,” she said. “I think right now we’re making more of an effort to centre BIPOC voices and LGBTQ voices in the menstrual movement because those are the people who are usually, typically most affected, especially in Vancouver.”

Srinivasa grew up in India, but took her gap year in Sri Lanka, where she saw that vulnerable communities are best equipped to solve the issues they face.

Srinivasa said that she had called Vancouver shelters and women’s centres to ask if she could donate period products when the pandemic hit but was told they already had enough.

She found that supply wasn’t a problem; it was reaching women in vulnerable situations who most likely wouldn’t go there to ask for them.

“That’s a convenience thing. I also think it’s a stigma thing,” she said. “I felt like it’s not enough to say, ‘Somewhere in the city, in some basement room in a homeless shelter, there are menstrual products, you need to go find them,’ I think it needs to be far easier, it needs to be next to where the toilet paper is in public washrooms.”

This is what led her to reach out to Bligh. They set up a call and Srinivasa told her about pilot projects that had been successful in other parts of the country.

Bligh also credits Period Promise for the work they have done to accelerate menstrual equity in the Lower Mainland.

“The Period Promise has been a hard-fought campaign to really create accessibility and equity around availability to menstrual products in civic facilities,” she said.

Mebrat Beyene, executive director of Wish, said the project is going well. “It’s filling gaps that existed even before COVID, but that were certainly deeply exacerbated by COVID,” she said. 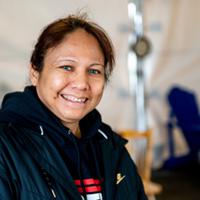 SisterSquare: A Popup Refuge for Women on the Downtown Eastside

When COVID restrictions are lifted, Beyene hopes that the washrooms and sanitary products will stay and continue.

“When things go back to normal, we’re hoping that we can continue this, because as you can imagine, we’re talking about really basic, basic, basic health and sanitation needs and returning to 'normal' would be a shame, because these are things that we needed before COVID, they were just as desperate before COVID.”

She said women have told Wish employees that if it weren’t for the washroom trailers, they would have nowhere else to go. “And by women we’re talking about cis and trans and gender diverse,” she said.

Srinivasa’s next goal, as products become more accessible, is to ensure they don’t harm the environment.

“That’s something that I think would be great going forward, to look at the fact that we need to provide products but also looking to the environment side of it,” she said.