A COVID-19 emergency order continues to ban evictions in B.C. But that doesn’t mean some landlords aren’t trying.

Qiu Ling Chen was threatened with eviction from her Vancouver Chinatown hostel on Main Street Thursday.

Advocates were successful in stopping the eviction. But they’re worried other vulnerable tenants might not choose to fight back.

Nat Lowe, an organizer with the Chinatown Tenants Organization, is urging tenants threatened with eviction to get in touch with his organization or the Vancouver Tenants Union to get help.*

Lowe said he believes that when the provincial eviction ban is lifted at the end of August, there will be enormous pressure on tenants, especially in Chinatown and the Downtown Eastside.

Lorraine Shorrock is Qiu Ling Chen’s landlord. She told The Tyee she wanted Chen out for a number of reasons. Shorrock claimed Chen hadn’t paid rent since April. (Chen says she made cheques out to the building’s previous name, C&N Backpacker.)

Chen is “not sociable” and has locked other tenants out of the shared kitchen while she used it.

Chen said she did this to maintain social distancing in the small kitchen, as B.C.’s provincial health officer recommends to prevent the spread of COVID-19.

Shorrock said Chen should be paying $650 a month for her double room, but no one will share the room with her.

But Chen showed The Tyee a copy of the lease she signed with the previous building owner setting the monthly rent at $450. Shorrock claims that lease agreement isn’t valid.

Inside Chen’s room on the third floor, there was barely room to walk between two bunkbeds crammed into the 100-square-foot room.

“You can see how small it is,” said Chen, who immigrated to Canada in 2009 and dreams of becoming a writer.

As Chen showed reporters the tiny room, the building’s manager kept up a steady stream of commentary from the doorway, asking why she had her bike in the room and where the mattress for one of the lower bunks was. (Chen showed him where she’d pushed it against the wall to make room for her suitcases).

When Chen complained about a mouse she saw in the kitchen, the manager told her: “You have to make friends with the animals!”

The Main Street building Chen lives in is valued at $6.7 million by BC Assessment. Shorrock also owns the St. Clair Hostel on Richards Street valued at $5.7 million.

Shorrock said the hostel does not provide monthly accommodation and therefore does not fall under B.C.’s Residential Tenancy Act. Tenants can only stay 28 days at a time, and then renew for another month, she said.

Chen has been living at the building since October.

But Lowe believes Chen’s tenancy does fall under B.C. rental laws, and Shorrock has to follow the Residential Tenancy Act if she wants to evict Chen.

Following negotiations with Shorrock, Lowe told The Tyee they agreed that Chen would pay $400 rent for June and July because there was a rat problem in the building, and $450 in August.

After The Tyee contacted the City of Vancouver with a photo of the room with two bunkbeds in the small space, the landlord also agreed to remove one of the beds from Chen’s room, according to Lowe. 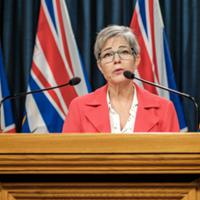 The Tyee attempted to confirm those details with Shorrock but did not receive a response by publication time.

Vancouver communications staff said the city is aware of recent complaints about the building and is investigating.

Lowe noted the agreement negotiated Thursday only lasts until the end of August, and he and Chen will likely have to meet with the landlord again.

The eviction ban currently protects tenants who haven’t been paying rent. But with deep job losses because of COVID-19, Lowe said the government also needs to cancel all outstanding rent debt to avoid mass evictions after the eviction moratorium comes to an end.

“They can’t expect tenants who haven’t been making money to pay back money they don’t have.”

*Story updated on July 24 at 10:40 p.m. to correct the name of the Chinatown Tenants Organization.