Mothers have been more likely than fathers to lose their jobs during the pandemic and face greater damage to their future earnings, according to a study by University of British Columbia researchers.

And experts say mothers will be less likely to return to work as the economy reopens and affordable, accessible childcare is a key solution.

Sylvia Fuller, a sociology professor at UBC and researcher who conducted the study with professor Yue Qian, said she hopes the pandemic will bring attention to the need for more funding for childcare.

“Childcare is just absolutely critical to gender equity and unemployment, there’s no question about that,” she says.

The study found that mothers with a high school education or less and children of elementary school age had faced big job losses in the pandemic. In February, employment among mothers from that group in the labour force trailed fathers’ employment rates by 1.6 per cent. By May, that gap had grown to 17 per cent.

The gap partly reflects differences in the type of jobs worked by women.

And the study notes “mothers likely bear the brunt of caregiving and hence employment losses.”

Kendra Strauss, director of the Labour Studies Program at Simon Fraser University, said this motherhood gap is the result of long-term gender inequality.

“We still have an issue with women being more likely to work part time, and we of course have a gender pay gap, so in a way, I think we can see these symptoms of a broader system that still has gendered expectations about the work that men and women should do,” she said. “And so we still have a sort of societal ideology in which women are responsible for the home and the care of children, and men are responsible for earning income in the labour market.”

Strauss agrees more childcare spaces are needed to help women to thrive in the workforce.

“We have quite good data over quite large periods of time that show that the countries that have the highest rates of female labour market participation, which are, for example, the Nordic countries, are countries that have childcare that usually starts around the age of two,” she said.

But other measures are also needed, Strauss said. A shorter work week, she said, could encourage men to take on a more equal role in the home.

“There is some evidence that suggests that men are increasingly wanting to be involved in familial and childcare roles and that they’ve started to take on more of that work, although it’s extremely, extremely unequal,” she said. “But long hours and long commutes and those kinds of things are very detrimental to men’s and women’s ability to take on those roles.”

Fuller said without access to childcare, women will have a hard time returning to work and be at risk of long-term unemployment.

“We’re going to probably see those inequalities widen even further, because as time goes on and employers start thinking, ‘I need workers, you need to come back’… and mothers especially aren’t in a position to come back because they don’t have care available — the odds of them actually losing their jobs go up over time.”

“We know that even when mothers and fathers are both working full time, moms put in more time in childcare, even before the pandemic,” Fuller said.

“They’re losing their jobs, and they have to re-enter the labour market and try and find a new position, often that sets them back,” she said. “They do that from a less advantageous position and for people who get laid off in general, they often don’t earn as much as they did before.”

“So if mothers don’t have jobs to go back to, if they have to start over from zero with a new employer, that is potentially going to have really long-lasting repercussions for their earnings.”

Fuller said uncertainty about plans to reopen schools is another factor preventing women from returning to work.

Sharon Gregson, spokesperson for the provincial $10aDay Child Care Campaign, said the pandemic should result in more energy and urgency in making long-term changes in the childcare sector.

“If families are ever going to regain their earning power and the ability for women to make their way in the world and participate in the workforce, we have to see a fix to the childcare system,” she said. “That’s why it’s so important that our provincial government has already started to implement the $10aDay Child Care Plan, but now they need to do more, they need to be bolder and get it done more quickly because of COVID-19.” 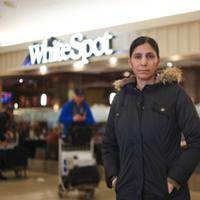 How Women Will Bear the Brunt of This Pandemic

Fuller hopes the conversation doesn’t just mean more spaces. There are a lot of problems with our current childcare system and now is the time to address them, she said.

Childcare centres are now largely open only during the standard weekday workday, she said.

“Folks are working in the evenings, they’re working on the weekends, and that’s particularly true for people at the bottom of the labour market and those kind of service jobs,” she said. “There’s a lot of limitations with our system that could be better addressed.”

Gregson hopes to see an increase in childcare spending in the provincial budget for 2021.

“We need to have a province-wide competitive wage grid for early childhood educators because right now they’re earning poverty wages, so there’s not enough people to actually work in childcare programs right now.”