After years of working in Canada and contributing to the country’s economy, migrant farmworkers are taking a stand in the pandemic and demanding their right to permanent resident status.

“We are writing about a crisis from within a crisis while responding to the crisis,” said Syed Hussan, executive director of the alliance. Two Mexican workers, Bonifacio Eugenio Romero and Rogelio Muñoz Santos have died in Ontario from COVID-19 complications.

The report chronicles the experiences of 1,162 migrant workers over a period of 60 days from March 15 to May 15.

One of its major streams is the Seasonal Agricultural Worker Program, which supplies roughly 60 per cent of migrant farmworkers coming into Canada.

The program gives employers control over every aspect of migrant workers’ lives, including housing, food, health care and travelling. If they are fired — for any reason — they risk homelessness and ultimately deportation. A negative report from an employer can result in them being barred from the program, making many workers reluctant to complain about abuse, health and safety issues, forced unpaid overtime and other exploitation.

At a Monday press conference, Edgar, a migrant worker at Scotlynn Farms in Ontario from Mexico City and a father of three, said many migrant workers experience unfair treatment. “We need equal rights and permanent resident status.”

Since the pandemic, the federal government has announced almost $900 million in funding for the agriculture and agri-food sectors. Employers in the temporary foreign worker program got $50 million to help cover quarantine costs, and $77.5 million was to go towards providing adequate access to personal protective equipment and safety measures for workers.

Temporary foreign workers are eligible for the Canada Emergency Response Benefit, but only if they are already in Canada. The workers who were unable to travel to Canada due to border closures or delayed arrival did not qualify for CERB even though some have worked in Canada for decades.

The report also documents approximately $57,000 in stolen wages from migrant workers by their employers in the form of unpaid wages and deductions. Some workers also reported not being paid 30 hours per week during their 14 days of isolation upon arrival in Canada, as required by the federal government.

Workers also told the alliance that pandemic safety measures weren’t being followed in employer-provided housing. The report alleges that workers arriving from different states in Mexico were placed in the same room on more than one farm. Sometimes up to 12 workers shared a room during quarantine, the workers say.

The report also underscores instances of racism, specifically anti-Black racism. Around 20 per cent of Caribbean workers reported facing racial threats and racial slurs, compared to 12.8 per cent of Spanish-speaking workers.

“Our workers are dissatisfied, feel neglected and unsafe,” said Karen Cocq, Migrant Workers Alliance for Change campaigns coordinator. “The demand for PR [permanent residency] is to ensure that the workers have the power and choice to leave bad jobs without fear of losing their livelihood or facing deportation.”

Along with the primary demand to ensure permanent residency for migrant workers, the report also outlines the need for federal and provincial governments to enforce health and safety standards and suspend all work at farms where safety measures to stop the spread of COVID-19 are not met. It also calls for national housing standards for migrant workers, higher wages and anti-racism measures.

B.C. normally sees about 10,000 migrant farm workers each year. With the pandemic, that number has dropped to 1,700.

In the beginning of the crisis, when federal and provincial governments were working on COVID-19 regulations, the province struggled. An outbreak at Bylands Nurseries Ltd. in West Kelowna in late March underpins this, where 63 of the 75 workers are migrants.

Eventually, the B.C. government stepped in and took responsibility for food and housing of migrant workers across the province for the quarantine period.

“The provincial government decided to support the workers, which made the difference,” said Byron Cruz of Sanctuary Health, a member organization of the Migrant Rights Network. “Government, ministries and local support groups all rallied to help the workers.”

According to Cruz, all cases where employers were withholding the 30-hour per week quarantine pay from migrant workers were solved.

The province has done well when it comes to making sure the workers are cared for during quarantine. The problem comes after, when migrant workers return to their normal work life. 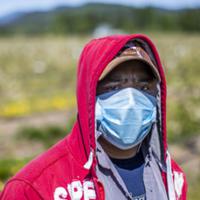 This Growing Season in BC Is Proving Difficult and Dangerous

Deplorable housing conditions, food scarcity and lack of mental health support for many migrant workers are issues that existed before the pandemic and haven’t gone away, the alliance says.

“[The] $50 million announced by the federal government is definitely not going to the workers,” said Cruz. “There needs to be an audit done to figure out where is the money going.”

On June 5, the province announced $1.88 million in funding to the BC Association of Farmers’ Markets Nutrition Program. None of this funding goes towards improving the physical conditions and lives of the migrant farmers who are essential in bringing the food to our table.

“The province is going great, but we need to do more when it comes improving the lives of migrant workers,” said Cruz. “This includes increasing minimum wage and introducing wellness checks of workers who are living their lives in isolation [on farms] regardless of the pandemic.”