Two take-out windows have opened in the Downtown Eastside.

No fast food here, though — it’s where people come to get their taxes done during the pandemic.

This is First United Church’s solution to the tax program they’ve run for 15 years for low-income people.

They didn’t want COVID-19 to halt the essential service, especially since clients are often unaware of the benefits they’re eligible for. (In 2018 the program handled about 2,000 returns, resulting in $202,000 in tax refunds.)

At the two take-out windows by the main entrance — which also offer food and hygiene supplies — staff walk clients through the paperwork needed for their tax filing and collect documents.

Amanda Pellerine, who co-ordinates the program, takes care of the filing from there.

“Getting taxes done are an important part of people’s well-being,” said Pellerine. “They’re connected to a lot of services and can turn someone’s life around. We help people get up to date, and get all their credits. We’re not just doing 2019 taxes. We’re going to go as far back as the CRA is going to allow us to go, up to 10 years.”

You don’t have to live in the neighbourhood to ask for tax help, though clients are required to be low-income. For example, if you’re single, the program is only available to you if you make less than $30,000 a year.

Pellerine has encountered many people over the years who have a complicated relationship with taxes.

Some might not know how to do them. “Most of the people we serve come from backgrounds that don’t really understand taxes at all,” Pellerine said.

Some might have had an interruption in their life. “We’ve had situations where someone had a good job for many years on paper and then fell into addictions or a mental health challenge and have not done taxes for seven to 10 years.”

Some might want to distance themselves from “the system,” she said, explaining, “They might not want to have anything to do with the government, are anti-government, or don’t want dirty money.”

Some might be fearful. “I’ve had binners try to tell me they sold something to somebody and got a receipt, or they had an honorarium for $200 for doing something. They’re scared that if they don’t claim it and get caught by the CRA, they’re going to be in big trouble.” Binners are people who collect and sell recyclables, sometimes collecting and selling items that people have disposed of.

Some have a hard time keeping a paper trail. “We can work with people who don’t have their documents. We work with them with the CRA.”

And some might not have an address. “They can use our building as an address.”

Pellerine has had clients who realized they were eligible for disability benefits, the Guaranteed Income Supplement, the GST/HST credit, the B.C. climate action tax credit and the B.C. Child Opportunity Benefit.

That last one is “really important for our single mothers,” said Pellerine. “If you’re a single mom and you don’t do your taxes, you will lose that child benefit.”

Edward Pedersen, 89, retired at 65 after working 44 years in cold storage for Canadian fish, has been making use of the tax program for five years.

“The service is excellent,” said Pedersen, who’s pleased that it was still offered during the pandemic.

(“You don’t hear about it much anymore, but I remember the scarlet fever,” said Pedersen as an aside. “It was mostly children who had it. When you opened the door for the postman, you told them to throw the mail in but not to come inside.”)

During a 10-day stay at the hospital last year, Pedersen had his $2,850 dentures stolen from his bedside table. Pedersen, who lives in the Downtown Eastside, wasn’t too surprised.

“When I’m down at Hastings waiting for the bus, I’ve had people say, ‘Hey, do you need some false teeth?’ because they sell them there.”

Upon receiving his new set, Pedersen wanted to claim it along with his prescriptions on his tax forms.

Pellerine has seen many repeat clients’ lives change after doing their taxes.

One was a longshoreman released from prison who hadn’t done his taxes in five years and needed to prove he was no longer making the $80,000 from the last filing the CRA had.

Another was a single mom with a young daughter who was staying in a transition house and getting away from an abusive relationship.

“I helped her through about five years of complicated taxes, dealing through the separation with no government assistance and no child support,” said Pellerine. “She didn’t have access to her child tax credit because she didn’t have her taxes done. It took a few months... but she got everything settled with the CRA and could afford her own apartment with her child. She’s in a much happier situation.” 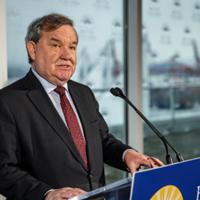 BC Gives $300 Monthly Boost to People on Income, Disability Assistance

Taxes offer a personal look into people’s lives, and trust is an important part of the work with clients, said Pellerine.

“You see how resilient people are living on such a meagre income. You know, the average income for a person on income assistance is about a little over $9,000. To imagine someone can survive and still have a smile on their face living with such a small income is kind of hard to watch, especially to be doing taxes for so many years and seeing that [assistance] rates haven’t gone up as much.”

The extended deadline to file taxes this year due to COVID-19 was June 1, but Pellerine isn’t done yet.

“I’m swimming in them,” she said. “I’m still helping some of the stragglers. My job is full of paper cuts. I’m not even kidding. From April ‘til June, they’re a bloody mess from flipping through paperwork all day.

“But it’s a really rewarding job. It’s great to see how something like filing taxes can really impact someone’s life, especially when they’re on income assistance. Even if they only get $75 back, that could mean feeding their family for a week.”