Students shouldn’t be counting on any return to “school as we know it” before September, Premier John Horgan said Wednesday.

And while parents struggling to balance work, childcare and home schooling may be disappointed, for many teachers the news comes as a relief.

Many fear an early return to classes would raise serious health and safety issues.

“On the scale of one to 10 of teachers’ anxiety, it’s at 100,” said Surrey high school teacher Lizanne Foster, who posted her own concerns about B.C. school cleanliness during the pandemic on Twitter.

“And they’re coming onto Facebook groups and feeding each other’s fears. You’ll have 10 absolute freakout posts, and then one person will say ‘You know, they’re going to make health and safety the most important thing, they are not going to send us into places that are not healthy and safe.’ And then we get another 10 freakouts.”

Teachers also fear the burnout some are already experiencing after revamping the entire system to deliver learning remotely — while ensuring their own families are cared for — would be worsened by a return to in-class instruction before the end of June.

But teachers and students will not be thrown back into the classroom without ample notice and planning, she said.

“It certainly won’t be everyone back on a particular day, just like nothing ever happened. There’s going to be some kind of phased approach taken, because we’re going to have to reduce the overall density in schools.”

Horgan, echoing comments by Education Minister Rob Fleming earlier this week, also said any return would involve “a gradual increase in the number of students.”

Fleming said planning for a possible return to classrooms is focused on “health and safety protocols, both for staff and students.”

As many an upset parent has pointed out, B.C. public schools are not always the cleanest or in the best physical shape.

One issue is maintenance and repairs that have been put off to save money. When the NDP formed government in July 2017, the province’s 60 school districts had $5 billion in deferred maintenance, from replacing hot water boilers and broken furniture to fixing leaky roofs. Last year the Vancouver school district alone reported a $744-million maintenance backlog.

The NDP criticized the BC Liberals for underfunding that forced school districts to put off needed repairs and maintenance.

But asked for an updated deferred maintenance tally, an education ministry spokesperson told The Tyee the number is not currently available or relevant, as the ministry does not rely on that data to establish the need for capital funding.

School districts trying to deal with limited funding under the former BC Liberal government had also cut cleaning staff hours, all but eliminating daytime custodian positions.

New Westminster became one of the last districts in the province to cut the majority of their day custodians in 2016 to ensure it had a provincially mandated balanced budget. Schools still had custodians who worked once students had gone home.

“There was a reason we had them in the past,” he said. “They cleaned all the desks — especially in the primary grades — at lunch; they empty the garbage; they cleaned bannisters; they cleaned railings; they cleaned windows and door handles on a regular basis; they checked on the washrooms; and of course they took care of the students and staff of that school.”

Prior to the pandemic, the majority of B.C. districts had one or no day custodians in schools.

High school teacher Foster said the pandemic has raised awareness of problems across the province.

“COVID-19 has just gone and taken a big spotlight and shown, ‘hey, is this what you’ve been doing to kids all this time?’ All this time they’ve been going to school without hot water,” Foster said, noting she was not criticizing the Surrey school district’s efforts to maintain cleanliness standards.

“Or even drinking water, let’s remember that — there are so many schools that have lead in the water.”

In 2017 CUPE, which represents the majority of custodians in the province’s public schools, polled 1,100 custodians in 40 of B.C.’s 60 school districts about their working conditions

Just over half said they were not able to keep schools clean enough to meet their own health and safety standards; 80 per cent said their job was not done at all or left incomplete when they took sick leave; and nearly three-quarters said their job was regularly left unfinished because of increased or unsustainable workloads.

The pandemic has already brought changes, said Marsolais, including a move by all B.C. districts to reinstate day custodians in schools, reassigning employees who had been working from 3 p.m. onwards.

That’s essential to meet the required protocols around cleaning and disinfecting, he said. “Of course our position is that day custodians have always been a basic essential service when school is in session,” he said.

“The cost of a custodian position is about $50,000 a year. It’s a small price to pay to ensure that our schools are safe, clean and that they’re looked after during the day when students and staff are in classes.”

Marsolais predicts the change will be permanent and districts will have to hire more custodians to keep students, teachers and staff healthy. CUPE will be lobbying provincially and locally to keep the day custodians, he said.

In its emailed statement, the education ministry spokesperson said their ministry has increased districts’ annual maintenance funding by $32 million — 17 per cent — since 2017.

School districts will be required to meet any guidelines established by the provincial health officer and ministry “while increasing in-class instruction,” the statement read.

Those could include controlling access to buildings, maintaining physical distancing among staff and students and promoting practices like hand washing, the statement said

“The ministry will review district plans prior to more students returning to in-class instruction to ensure guidelines can continue to be followed.”

More work to be done

Stephanie Higginson, president of the BC School Trustees Association, also spoke at the media conference with Fleming this week.

In response to a Tyee question about the cleanliness of schools in B.C., she echoed his message that health and safety comes first.

“We will make sure that schools can operate under health and safety guidelines and protocols that are provided by the provincial health office,” Higginson said.

Teachers’ federation president Mooring said the ministry is working closely with teachers, administrators, the health ministry and the provincial health officer to plan for a gradual return to classes. But a lot has to happen before students come back. 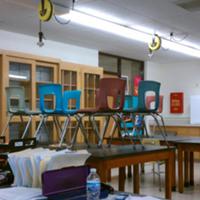 How’s BC’s Plan for Closed Schools Working? This Is Our Report, Now Send Us Yours

“There will need to be a lot more planning around what does cleaning look like, how often; what are the hand-washing stations that will need to be in place; what kind of PPE needs to be available,” she said. “There’s a lot of work that needs to go into that planning.”

Foster isn’t personally concerned about her school. The ministry has indicated that high school students may continue online learning for the rest of the school year, she said.

And her classroom is next to a washroom where students and staff can wash their hands.

Foster said she also has faith that her school and district administration will make the right choice for everyone’s health and safety.

But safety issues remain for others, she said.

“My classroom is at the end of the building, so I have access to outside. If they said we had to go back in June, I would be teaching outside most of the time,” she said. “But not everybody has that.”