Remember when Alberta Premier Jason Kenney’s new “war room” shot itself in the foot by launching with a professionally designed logo that looked way too much like one already belonging to a U.S. tech firm?

It turns out the Kenney government shot itself a few times. For example, the logo that finally helped solve its problem had been sitting right there, previously rejected, on the government’s own back shelf for months, The Tyee has learned from internal documents.

The Canadian Energy Centre was supposed to be Kenney’s attack dog ready to pounce on anyone who questioned the righteousness of the province’s fossil fuel industry.

Its $30 million-a-year budget faced big cuts last month, but only temporarily, the government said. COVID-19 and collapsing oil prices meant the government had to reduce spending, but the war room would be back to battle the industry’s foes.

So far the centre has mostly damaged the Alberta government.

It attacked the New York Times in a series of stupid tweets, then apologized. The budget for the secretive operation — $80,000 a day, seven days a week — drew critics. So did hiring a failed United Conservative Party candidate as CEO.

But perhaps the most embarrassing moment came very early, when the war room launched with a logo and immediately faced complaints it had pilfered the trademarked and nearly identical symbol of U.S.-based Progress Software.

The Alberta government named and blamed a design agency for producing the botched logo. 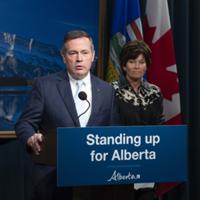 Kenney’s ‘War Room’ Shoots Itself in the Foot — Again

The centre’s incompetence was widely ridiculed. A design agency’s site mocking both the war room and the design industry — Energy War Room Logo Generator — let people spin a digital wheel of familiar corporate graphics and font pairings and come up with a logo for the centre, complete with a pretentious justification for the design.

Energy centre managers rallied, assuring the media their team had already started to work to “update its visual identity and a new logo is forthcoming.” And then, sure enough, they trotted out a new logo.

But The Tyee discovered the new logo wasn’t so new.

In fact, logo options had been developed five months earlier, then rejected in favour of going to an outside designer, according to documents obtained by The Tyee under a freedom of information request. (The Canadian Energy Centre is entirely funded by taxpayers, but the Alberta government made it a private corporation exempt from freedom of information requests. The public still has access to documents created before the centre was formally established.)

In July, three months after Kenney and the United Conservative Party were elected, a government graphic designer was set to work coming up with a logo for the war room he promised during the election campaign.

It was a big opportunity for Sheldon Belanger, who works in the government’s centralized communications, public relations and marketing services operation.

He leapt into action, offering 16 logo options for what was then tentatively called the Canadian Energy Resource Centre.

And, like the parody online logo generator, Belanger provided a rationale for his choices. The logo, he said, should evoke:

“I will tackle the colour challenge once we get past phase #1 and start dialing this in.”

The current logo clearly has its roots in that collection. The colours have been “dialed in” and the graphic element tilted. But Belanger’s effort — after being rejected — ultimately saved the day during the war room’s logo scandal.

Well, sort of saved the day. So far the Belanger solution survives, despite a complaint by a different U.S. software maker, ATK Technologies Inc. of California, that round two is now too similar to their trademark, and so they were considering legal action.

The original logo presentation to the Alberta government also shared samples of logos from other advocacy organizations — from the Fraser Institute to Greenpeace.

We’ll leave it to you to judge how well the war room logo — and effectiveness — stacks up against the group.