Kate Gibson is thinking a lot about water these days.

Specifically, how to get it safely to the hundreds of women who stop by the Downtown Eastside Women’s Centre on Cordova Street each day.

She wonders which containers will be easiest for women to carry, which are most environmentally friendly and whether the centre can get enough of them.

“Women are asking for water all the time,” said Gibson, the centre’s acting executive director.

The businesses and public buildings where people experiencing homelessness are often able to get water are shuttered, and women haven’t been able to come into the centre for more than a month due to the pandemic.

Water is on Gibson’s mind right now. But it will be replaced by something else just as soon as the problem has been sorted, and then something else after that.

Shelters for homeless women and transition homes for women fleeing domestic violence in B.C. are facing waves of challenges delivering their support services at the same time as other places women turned to in the past are no longer open.

The Downtown Eastside Women’s Centre is closed, although women can use the washroom one at a time. It still serves hundreds of breakfasts and lunches each day. The centre’s meal program has received support from local restaurants and caterers that deliver meals, as well as funding from provincial agency BC Housing.

But instead of crowding into the centre and congregating at tables, women line up down the block and the food is brought outside in compostable containers.

Supports for housing and health are now provided over the phone or at distance, with meetings in workers’ offices now cancelled.

After running out of emergency clothing to give women, the centre is also figuring out how to safely begin accepting some clothing donations again.

Gibson says many of the women are grateful to see familiar faces and get a warm meal each day. “They’re missing the whole social aspect. But they also know that it’s safer.”

But the women are facing big challenges as pandemic-driven closures are extended.

The centre’s shelter is operating under capacity, with about 50 of 57 beds occupied in order to allow physical distancing and increased cleaning. Each night, they turn away up to 40 women due to lack of space.

Outside the centre, access to washrooms has all but disappeared with the closure of businesses across the city.

And women fear violence, harassment and infection if they use portable toilets the city has placed in the Downtown Eastside’s parks unless they have someone to stand watch outside the door.

Rising violence against women is what worries Gibson most.

“I think one of the concerns in the neighbourhood is an elevated level of violence against women in particular... which is just brutal,” she said. “We need to make sure that women are aware and women are careful.”

Gibson doesn’t like to put the onus on women to stay safe, but with limited resources she says they have to take every measure possible.

Vancouver police said violent crime has not increased in the city since the start of the pandemic and reports of violent crimes in the Downtown Eastside last week were down about five per cent from the month before.

“We are concerned for the safety of everyone in the DTES,” said Sgt. Aaron Roed in an email. “The VPD will continue to maintain a visible presence in and around the DTES including Oppenheimer Park and surrounding communities.”

For transition houses that help and temporarily house women fleeing domestic and gender-based violence, the challenges are different but just as serious.

Lanna Many Grey Horses, who manages women’s and children’s services in Powell and Springhouse shelters in Vancouver, says they’re having to reimagine how to connect with women when they can’t be physically close.

The shelters have a combined 84 beds, plus 10 second-stage transition house units for families, and often operate beyond capacity.

And as domestic and gender-based violence increase in Canada during the pandemic, they’re expecting increased demand for help as they navigate increasing measures to keep everyone safe and healthy.

“I think women are actively looking for help,” said Many Grey Horses. “Whether it's economic pressure or maybe a challenge at home, there’s family breakdown and domestic stuff happening.”

Bloom Group, the non-profit which runs these and other emergency and supporting housing units in the city, has received a combined $85,000 from the Vancity Community Response Fund and BC Housing. The money has supported a number of measures, including setting up Wi-Fi throughout the buildings as libraries and other access points close.

The transition house has also pivoted to serve three meals a day. Before the pandemic, women living in the house had generally cooked meals in communal kitchens, but food service was started to reduce the risk of virus transmission.

But many women find calm in cooking for themselves and their children, and the kitchen can now be booked in advance so staff can sanitize between each use. The transition house has taken the same approach to allow children to use playgrounds on the property.

The pandemic has also reduced the capacity to accommodate women and children fleeing violence. 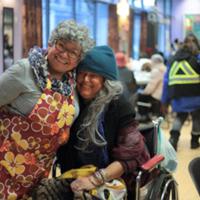 Cleaning protocols mean beds often remain empty for a night or two, where previously they were immediately available when women moved to more permanent housing.

“We usually turn over a bed within a day,” said Many Grey Horses. “Now we work with the assumption there could be a COVID-19 risk there.”

And while there are now more hurdles and fewer options for women, the community and trust-building that is essential to shelters and transition homes is still taking place, just a bit further apart.

“I think for anyone the pandemic is really difficult, but particularly when you're trapped in that small hotel room,” said Gibson, noting many women the centre supports live in single-occupancy rooms.

“But the women do have some social interaction and, just as if they were inside, they’re safe being outside and having the staff there to talk to.

*Story updated on April 23 at 2:32 p.m. to clarify services offered by Bloom Group.