The B.C. government is taking over as the employer of all long-term care workers in the province in response to the COVID-19 threat in seniors’ homes.

Provincial health officer Dr. Bonnie Henry said this week that every worker would be hired full-time and paid standardized wages for the next six months.

On Thursday Henry barred employees from working at more than one facility, citing the risk of spreading the virus.

“As we know, many of them work not only across facilities but in acute care and long-term care,” said Henry, noting this was out of financial necessity.

“The bottom line is, everyone will be employed by the ministry at a specific rate so they will not be penalized.”

COVID-19 has already been identified in 19 long-term care facilities and resulted in 24 deaths in the province.

All workers will be paid the same wages as those in collective agreements with public health authority-run facilities represented by the Health Employers Association of B.C., health spokesperson Alex Peaker said in an email Wednesday.

This move will result in raises for thousands of workers. The contract for unionized care workers in the public sector sets a starting wage of $24.83 for care workers, nearly $7 an hour more than starting pay in many private and subcontracted care facilities.

The wage disparities are a result of almost two decades of erosion of worker protections and bargaining due to measures introduced by the former BC Liberal government.

Jennifer Whiteside, secretary-business manager at the Hospital Employees’ Union, said the changes should bring permanent reform to a broken system.

Low wages paid by private operators have resulted in staff shortages and forced employees to work in more than one location to earn a living, she said.

“[Reform] is, frankly, the only way to deal with a system that was already in deep crisis before we were hit with a pandemic,” said Whiteside.

The government has promised a major review of the sector after the crisis.

Whiteside, whose union represents 50,000 health-care workers in B.C., said the government won’t be able to return to the old system.

“How are you going to knock a wage back $5 six months from now? I can’t see how there is any going back.”

In B.C., about one-third of long-term care is delivered by health authorities and two-thirds by contracted private and non-profit care providers. The HEU represents the largest number of unionized workers in the sector, and 20,000 who work directly with seniors.

Seniors Advocate Isobel Mackenzie reported in 2018 that only 54 of 187 care providers contracted by the province were paying the same wages and benefits as government care homes.

“Advocating for good working conditions and for decent work in this sector, that is also very much about advocating for good quality care,” she said, noting that working multiple low-paying jobs makes it harder for workers to perform at top level. 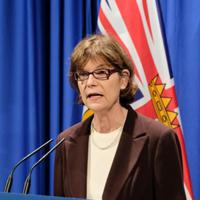 Home Care Is Supposed to Help. In a Pandemic It May Hurt

“We know that having stable staffing across long-term care will result in better caring conditions for the residents.”

“As it will likely be the Ministry of Health that will be providing the payments to workers and not the employers themselves out of existing funding, care home operators are not anticipating that it will impact them from a financial standpoint,” he said.

Whiteside said the task of implementing a centralized staffing and payment strategy is bringing to light the “fracturing of labour standards across long-term care.”

It is also showing that change is necessary, she said.