Did you hear the COVID-19 story about swans and dolphins appearing in deserted Venetian canals?

Or the one about people climbing the scaffolding at a Richmond Costco to get bags of rice?

Perhaps you’ve received advice on how to avoid the coronavirus, like boiling your fruits and vegetables before eating to kill the virus particles lingering on the skin.

It’s been spreading so fast in the West lately, says a “trusted source in Hong Kong,” because westerners eat a lot of salad and haven’t been boiling their greens.

This PSA was the latest COVID-19-related update Vancouver’s Benjamin Cheung received from his relatives.

“I’m just sitting here going, who is this trusted source in Hong Kong who insists on remaining nameless?” he said.

During the COVID-19 pandemic Cheung and many others have been receiving daily messages on WhatsApp and WeChat forwarded by family and friends. Reminiscent of chain letters, many do not have a source. Some even contain typos.

“It makes me wonder, where did that chain even start from?” said Cheung. “Somehow, everyone is everyone’s friend.”

One vague message in simplified Chinese that went viral in Vancouver on March 23 told of “five helicopters spraying disinfectant into the air to eradicate coronavirus” at 11:40 p.m., without saying where. Other messages have said that boiling water and salt water can kill the virus, and have encouraged people to gargle both. One says to eat a hard-boiled egg and you’ll be OK.

Every community on the globe has been developing their own strains of COVID-19 conspiracies, remedies and rumours based on their culture and where they live. In Russia, there’s talk of Vladimir Putin using lions to enforce lockdown. In Iran, the false belief that toxic methanol can fight COVID-19 has led about 300 people to ingest it, and die.

Other messages target a global audience, such as claims that 5G cell networks are responsible for COVID-19. There is also a viral letter, penned by someone pretending to be Bill Gates, about the coronavirus’s “spiritual purpose” as a “*great corrector.*”

A happy genre of false reports about nature’s return in the wake of abandoned places has also surfaced. Aside from dolphins in Venice, there is a viral made-up story about elephants in Yunnan breaking into a village and getting drunk on corn wine.

This is the other pandemic that’s risen alongside COVID-19: misinformation.

A history of viral falsehoods

These days we receive a lot of junk content on our phones. But Steven Taylor, a professor of psychiatry at the University of British Columbia, says pandemics have always been accompanied by misinformation.

COVID-19 is causing a Toronto shutdown? They said that about Hong Kong during SARS.

President Donald Trump calls COVID-19 the Chinese virus, while a Chinese foreign ministry spokesperson blames U.S. military for bringing the virus to Wuhan. Xenophobia and political blame games are nothing new either. During the Spanish Flu a century ago, Americans said a “nurse of German extraction” was responsible for spreading the flu in Pennsylvania. There was no proof of this.

What is new this time is the speed.

“This is the first pandemic in the era of social media, and it’s a game changer in the way that it spreads fake news faster,” said Taylor.

COVID-19 has been especially surreal for Taylor, who had spent two years writing and researching a book called The Psychology of Pandemics: Preparing for the Next Global Outbreak of Infectious Disease, published in October.

Much of what he wrote about the next big pandemic has happened already with COVID-19.

Not prophetic, he says, just research.

Conspiracy theories have always accompanied pandemics throughout history. In 1576 Italy during the Bubonic Plague, there were widely circulated pamphlets warning of people spreading the disease intentionally with infected clothing and poisonous ointments on door handles — the “medieval version of fake news,” said Taylor.

But what spreads more widely than conspiracies are rumours, often blended with doses of fact or specific local details to pass off authenticity.

For example, the photos of Costco rice raiders came from the U.S., but photos of the Richmond Costco were thrown into the collection in an attempt to prove the hysteria was in fact taking place in Richmond.

Taylor lays the blame on trolls who crave “a sense of power.”

‘Do anything to be safe’

The COVID-19 remedies circulating the web are merely the 21st century’s version of age-old, cure-all folk solutions of lemon, garlic or turmeric.

“People are desperate to try and get a sense of control in an out-of-control situation,” said Taylor. “The people passing these on are practising a ‘do-anything-to-be-safe’ approach.”

The do-anything-to-be-safe approach would explain the barrage of messages that people like Benjamin Cheung have been receiving from loved ones.

“The best I can do with my parents is offer to fact check when I can,” said Cheung, who is a PhD in social psychology and full-time lecturer at UBC.

“It’s always an uphill battle. Every day, they bring me new claims.”

This week, former CBC reporter Terry Milewski fell for an unscientific chain message containing tips on how to fight COVID-19, inaccurately credited to the U.K.’s National Health Service. It told people to sunbathe because “The sun’s UV rays kill the virus and the vitamin D is good for you” and to “Ensure that your mouth and throat are always wet, never DRY.” He shared it with his over 88,100 Twitter followers, many of whom told him to take it down.

Cheung sees the “do-anything-to-be-safe” messages as an attempt to offer advice about individual well-being. Experts and world leaders have lots of advice for general populations, but little about everyday matters such as whether to wash an apple.

He’s particularly worried about the spread of misinformation through racialized communities dealing with barriers like language.

“It’s like a game of telephone,” said Cheung. “It might start with the government saying something, then someone understanding it in a slightly different way, and it’s passed on and comes back to me sounding completely absurd.”

“We used to joke about how if my mom knows something, then the next day the whole Chinese Canadian community will know. These networks are so much more dense, and the proliferation of these messages are so quick. Community organizations need to take advantage of these dense networks and use them for good.”

On popular messaging platforms such as WhatsApp, there’s no public or even private record of where forwarded messages have come from, and so they are difficult to trace. On WhatsApp last December, a viral story about the Queen’s death was lapped up by the British public.

“People need to think carefully before forwarding rumours,” said Taylor, “especially rumours with a sense of urgency, with a call to action, like go get to Costco because things are running out fast, or Toronto’s going to be in lockdown, get your loved ones out of there.”

Filtering out the fakes

It doesn’t help when leaders like Brazil’s Jair Bolsonaro or America’s Trump are spreading misinformation themselves. Trump’s claims of an anti-malarial drug’s effectiveness against COVID-19 led to it being hoarded, at least one death and overdoses around the world.

It helps that the COVID-19 pandemic is a universal, apolitical crisis, unlike touchier subjects such as white supremacy that Facebook and Twitter have been cautious to regulate. 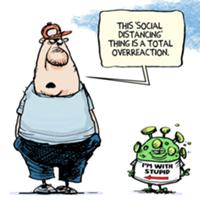 What Should We Do with These Super Spreader Bozos?

In this crisis, they have been more willing to take action, setting up filters for false information and pointing users to authoritative sources.

As a student of history, Taylor believes a new cluster of rumours will arise when scientists come closer to a COVID-19 vaccine. The anti-vaxxer movement has been singled out by the World Health Organization last year as a dangerous threat. People refusing to vaccinate against COVID-19 when a vaccine does arrive could be a huge problem, he said.

Because beliefs and fears lead to action, they are therefore crucial to good health.

“We need to make sure we’re getting our information from reliable resources,” said Taylor. “If we consume sensationalistic media, we create demand.”