It’s not easy to get Vancouverites to weigh in on the future of the city — especially residents not used to leaping into planning policy debates.

And as Vancouver starts work on an ambitious new city-wide plan touching on everything from land use to reconciliation, that’s a problem.

As part of the city’s plan to gather the views of residents, it launched an online survey in November. It’s available English, Punjabi, Tagalog and both traditional and simplified Chinese.

Susan Haid, the city’s deputy director of long-range and strategic planning, said the goal was “to reach all voices, especially voices we don’t typically hear from, and those who have had barriers to participating in civic affairs in the past.”

However, on Feb. 11 the city announced that the majority of people who responded were English speaking, over 40 and without young children.

People from other cultural backgrounds, young adults and young parents carving out a life in Vancouver weren’t part of the discussion — a major problem when it comes to developing a plan that meets the needs of all residents.

In the city’s own words, a “broader diversity of voices” is needed.

An online survey could shut out people who aren’t well-versed in digital technology or used to sitting down for a questionnaire, he said. And designing a good survey is “brutally hard.”

“You have to be a master of statistics, a master of language, and understand the population you’re trying to survey,” said Yan.

Since the city asked for help spreading the word, more people have taken the survey, though still predominantly in English.

Haid said city staff are “going to where people live, work and play” to encourage residents to weigh in.

Street teams have visited areas where survey responses are lower, such as the Downtown Eastside, Kitsilano and south Vancouver. Staff have tried to “intercept” Vancouverites where they already gather, Haid said, setting up at existing community events.

City staff have also met with almost 100 groups to hear their visions for Vancouver’s future. They include government-based groups, such as the local First Nations, and community-based groups, from the Sustainabiliteens to parent advisory councils.

It’s this kind of face-to-face engagement that made the last city-wide planning process — called CityPlan, which kicked off in 1992 — a success.

But how did city hall get “diverse voices” to participate back then — a time before Windows 95?

Ann McAfee, then co-director of planning who led the process, says that being online isn’t as important as being onsite.

‘All issues’ from all people

In the early 1990s, Vancouver council decided to put new housing on the west side, near Arbutus and West 12th where an old brewery had been.

The criticism frustrated then mayor Gordon Campbell. McAfee can still recall the scene that literally kicked off CityPlan.

“I remember Gordon Campbell taking off one of his shoes, banging it on his desk and saying, ‘Let them walk in our shoes and see all the choices that have to be made!’”

The CityPlan slogan’s was “Hear about all issues, hear from new people and hear through new ways.”

To entice people to get out and contribute, Campbell took matters into his own hands, McAfee said, signing letters asking people to participate in the planning process.

“That year [1992] the Toronto Blue Jays were in the World Series, and he really enjoyed watching the World Series,” said McAfee. “So he sat in his office and signed 2,000 letters. And people came in their best bib and tucker! They wondered: How did the mayor get my name? So there was a sense that yes, the city was reaching out.”

Half the letters went to random residents and the other half went to every organization in the city, from the Downtown Vancouver Business Improvement Association to a stroke group for elderly Chinese.

People felt important being invited, and McAfee remembers seeing them show up to the first sessions holding their gold-embossed, hand-signed letters.

“People picked topics that interested them,” said McAfee. “The city never said, you can’t talk about that.... It built a shared sense that the city really cared.” It was so open that some city staff were frustrated with McAfee’s team, wondering if they were hiding some master plan. (They weren’t.)

Participants formed “City Circles,” groups of 10 to 15 that met regularly. McAfee had expected about 20 groups, but there ended up being 150 in English and 70 in eight other languages.

There were another 150 “Classroom Circles” for students of all ages. “Polaroid donated hundreds of cameras to elementary school children, who went out to take pictures of what they liked in their neighbourhood,” said McAfee.

Large text and recorded information supported those with vision challenges. City council also had a rule: no consultants. People and groups had access to toolkits and staff to help them participate.

In total, more 4,000 participants from all corners of the city shared their ideas and concerns. “They chatted around kitchen tables, in offices, libraries — it was really incredible,” said McAfee.

The city also got the word out through local mainstream and non-English media, hoping to attract people whose voices weren’t usually heard.

The usual suspects who showed up regularly at council to make their voices heard — generally homeowners — asked why the city was “wasting its money on all these people,” McAfee recalls. Some academics were skeptical about the process too.

Participants were challenged to ensure their ideas came with feasible solutions.

“One person said the answer was to build a new town up in the Squamish Valley, and everyone said, ‘The city doesn’t have control over that!’” said McAfee. It was helpful to have citizens, rather than staff, telling one another what was possible, and working towards solutions together.

City staff impressed upon participants that “there were no right or wrong choices, just different consequences for the city,” McAfee said.

In total, over 3,000 submissions were sent into city hall. They were mostly written, but also included maps, videos, photographs and models. Aside from translations, none were edited.

A 477-page volume called the Ideas Book was published and a three-day event called the Ideas Fair was held. Volunteer artists helped illustrate the ideas, ensuring that everyone from the Urban Development Institute to the Vietnamese single mothers circle would have their proposals depicted equally, despite the size of their organization.

Vancouver’s network of greenways for walking and cycling was born from this event, though trickier issues like where to allow development were moved to a later stage on making tough choices.

At the end of the process, some of the major conclusions were that residents wanted to protect Vancouver’s industrial land and were willing to welcome new density for jobs and housing — even in single-family neighbourhoods.

Consensus was never 100 per cent, but McAfee noticed that people were usually OK with what the majority decided after having wrestled with the choices together.

CityPlan unfortunately suffered in its implementation, due to a lag in initiating re-zonings and a new mayor. In 2005 Sam Sullivan was elected, and he pushed CityPlan to the sidelines in favour of a new strategy called EcoDensity.

In 2008, when Gregor Robertson and his Vision party were elected, CityPlan was further sidelined, and many of the staff who worked on the process retired or relocated.

However, the legacies of CityPlan include neighbourhood plans, community policing, secondary suites and laneway houses.

“It was great fun,” said McAfee of the process, and provided crucial face-to-face interaction between Vancouverites.

“You have people facing choices, discussing choices, disagreeing with choices and hearing the other side. Nowadays, people tend to read the blogs of people they agree with. So, when do you really have to face the other side of an issue? Or someone who’s got a different perspective and find some kind of middle ground?”

‘This is the people’s plan’

For its new city plan, Vancouver is taking a cue from the old process by rolling out “dialogue kits” next month. Anyone can form a group, and the kit will walk them through the process of envisioning their future city.

“We’re very open to what constitutes a group,” said Vancouver planning director Haid. “It could be sitting at a table with your friends or family, your soccer team, places of worship.” 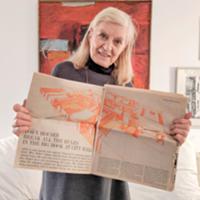 In Search of Canada’s First Condos, and the Woman Who Paved the Way

“We want this very much to be community convened. We’re just the ambassadors of the process.... We’re open to learning, listening with empathy, making mistakes — we have already. [Ultimately], this is the people’s plan.”

SFU’s Yan hopes that translators will do discussions justice, as the 2016 census revealed that a third of Vancouverites don’t speak English at home.

“How do you translate rezoning in Cantonese? How do you talk about FSR [floor-space ratio] in Punjabi?” he asked.

And beyond that, Yan hopes the process will dig deep into residents’ dreams for the future of the city and tackle challenging choices.

“You can ask questions that are mom and apple pie, like what buildings you want to see, but don’t go into the issue of broccoli, the hard issues.”

The final plan is expected to be presented to council in summer 2022.

People who live and/or work in Vancouver can take the survey here. The same link can be visited in mid-March for the soon-to-be released dialogue kits.