A new BC Ferries vessel will be at least a year late going into service and is far over budget due to bad decisions the former provincial government made, says Transportation Minister Claire Trevena.

Events leading to the trouble with the Northern Sea Wolf go back to 2013 when the government cancelled Route 40 between Port Hardy at the north end of Vancouver Island and Bella Coola on the mid coast over the objections of people in the tourism industry.

With the route gone, BC Ferries sold the Queen of Chilliwack that had been serving the route. Between 2010 and 2013, the company had spent some $15 million to upgrade the vessel, but sold it for less than $2 million. It’s now operating as the Lomaiviti Princess III in Fiji.

Then the Liberal government reversed course in 2016 and announced that the route would be back in service for the summer of 2018.

Trevena said the reversal under then premier Christy Clark was politically motivated.

The government did not, however, have a plan for how to bring the service back, Trevena said. It was in a hurry, and there was no way for BC Ferries to have a new vessel built and still meet the government’s timeline. So they found a used one to buy in Greece.

The original purchase price was $12.6 million and, as Trevena put it, “They spent the last number of years pouring money into it.”

Originally built in 2000, the Northern Sea Wolf will carry about 35 vehicles and 150 passengers, making it about one-third the size of the vessel that previously served the route.

A spokesperson for BC Ferries, Deborah Marshall, acknowledged the refit has cost more than originally estimated, but declined to say what’s been spent so far. “Due to commercial sensitivities related to open contracts, BC Ferries cannot comment on total costs until all the work has been completed.”

The majority of the work is complete and what’s remaining is being done in Richmond, Marshall said in an email. “We have completely modernized the ship with a new galley, bridge, electrical generators, HVAC system, washrooms, elevator, chair lifts, new cafeteria and passenger accommodation area. In many aspects the vessel is totally new.”

The upgrades will keep the ship on par with other BC Ferries vessels serving the northern routes, she said.

The amount of work the ship needed became apparent after it arrived, Marshall said, despite efforts to inspect it before BC Ferries bought the ferry. “Surveys and conditions of assessment were conducted on the vessel, however when it was fully opened up there were some areas that were in worse condition than anticipated. We needed to bring the ship up to BC Ferries and Transport Canada’s standards.”

Marshall did not provide further details.

The remaining work is to be completed this week, and sea trials and systems testing are scheduled for the first two weeks of April, Marshall said. That will leave a month for training crew, testing by Transport Canada and fitting the docks it will use.

“On approximately May 18, the Northern Sea Wolf will assume mid-coast connector service from the Nimpkish, and will begin the ‘direct service’ between Bella Coola and Port Hardy on June 3,” she wrote. 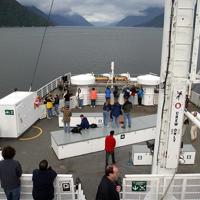 BC Ferries is satisfied with the work that’s been done since the vessel arrived, she said. “The employees at our ship repair facility as well as contractors (including Esquimalt Dry Dock) have been doing a good job on the project.”

An updated budget for the project was included in the Connecting Coastal Communities: Review of Coastal Ferry Services report that special adviser Blair Redlin prepared for the transportation ministry, Marshall said.

Asked in an interview what he thinks went wrong, Redlin said the vessel required more work than anticipated to make it seaworthy.

“Maybe they purchased a vessel too quickly,” he said. “I’m pretty sure it was a political timeline the former government wanted them to meet.”

Work on the vessel has continued for nine months since Redlin submitted his report, and Trevena observed that the total cost is likely much higher now. 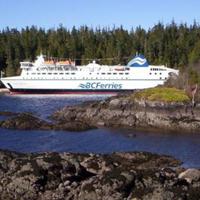 BC Ferries Rushed Ship into Service Despite Safety Worries

“BC Ferries is clearly not happy with what happened,” Trevena said. “Obviously it reflects badly on them, but they wouldn’t have been forced in this position if there’d been a more thoughtful approach.”

BC Ferries chose to buy the vessel and underestimated the cost to refurbish it, but it wasn’t the company’s choice to have to rush to have a vessel on the route within a year, Trevena said. “The scrambling for it lies directly at the feet of the former government.”

Trevena said she’d like to see the vessel in service this summer. “The tourism operators are still very anxious about whether they will have a ferry running. Their business depends on it.”

Redlin said it would be great to have the service restored. “If they can get past the problems with this and bring it in so it’s safe and reliable, that will be a good thing.”