Wild salmon exposed to fish farms are much more likely to be infected with a virus linked to a deadly disease than salmon that don’t migrate by the open-net pens, according to a new study.

The study, published in the journal PLOS ONE this week, found that only five per cent of wild salmon in the Skeena River in northwestern B.C. carried the piscine reovirus (PRV). There are no fish farms in the area.

In contrast, 45 per cent of wild fish in the Broughton Archipelago and Discovery Islands, where the industry is centred, carried the virus.

The study also found that about 40 per cent of wild salmon sampled in the Lower Fraser were infected with the virus, but only 20 per cent in the Upper Fraser carried the pathogen.

Alexandra Morton, biologist, activist and the chief author of the paper, said the findings suggest the virus is limiting the ability of salmon to make their way to spawning grounds.

“That finding suggests infected fish aren’t having the same success getting up the river,” she said.

The research confirms the observations of First Nation net fishers in Lillooet, who have reported that many fish never leave the river’s pools to complete their migration.

“This is the first study in the world to look at infection rates in wild salmon compared to the level of infection in farmed fish,” said Morton.

Morton obtained samples for virus testing from 200 wild fish from up and down the coast. She had to purchase the same number of farmed salmon from 10 different supermarkets between 2012 and 2013 to obtain samples.

“That was the only way we had access to farm salmon,” she said.

The study found that 95 per cent of farmed Atlantic salmon purchased from B.C. supermarkets were infected with PRV.

The blunt-talking biologist, who has been pressing government regulators to move the controversial industry onto land, admits the study’s findings would have been stronger if she’d been allowed to obtain samples directly from fish farms.

“The evidence, based solely on molecular screening tests from this observational study, and constrained by limited access to farmed Atlantic salmon samples of known provenance, cannot be definitive,” the study notes.

But the results “suggest that PRV transfer is occurring from farmed Atlantic salmon to wild Pacific salmon, that infection in farmed salmon may be influencing infection rates in wild salmon, and that this may pose a risk of reduced fitness in wild salmon impacting their survival and reproduction,” the researchers concluded.

Jeremy Dunn, executive director of the BC Salmon Farmers Association, told The Tyee, “We have not had a great deal of time to review this paper but have not seen anywhere where the authors are providing any evidence of demonstrated harm.”

“As the authors state, there are many factors that still need to be investigated, and the BC Salmon Farmers Association and its members agree.”

“PRV is common amongst the populations of salmon on farms in B.C. This has been well known for some time and is the subject of a very active field of research,” Dunn said. “To date, it is very rare to see PRV associated with any sickness of salmon on farms here.”

Morton’s paper noted that HSMI has not been detected in Norwegian or B.C. wild salmon. But diseased wild fish are quickly killed by predators, so evidence of viral harm is hard to document.

The study also confirms the findings of Norwegian researchers that fish farms have created viral hot spots in the ocean.

A 2013 study, for example, looked at the occurrence and distribution of the virus in salmon caught in Norwegian rivers.

Researchers found the virus in 13 per cent of wild Atlantic salmon, 24 per cent of salmon released for stock enhancement purposes, and 55 per cent of escaped farmed salmon.

Piscine reovirus has been linked to heart and skeletal muscle inflammation (HSMI), a deadly disease that impairs a fish’s ability to swim and produces other physical symptoms.

Although industry and government long denied the presence of HSMI in B.C., research supported by the Strategic Salmon Health Initiative confirmed its presence at a fish farm in the Discovery Islands between 2011 and 2013 and possibly at three other farms between 2013 and 2014.

The presence of the Norwegian virus has also alarmed many First Nations that have traditionally depended on wild salmon as a central food source and cultural inspiration.

In October, the provincial government launched  an investigation of the integrity of fish testing in the province after concerns were raised about possible conflicts of interest.

The piscine reovirus is also at the heart of another controversy swirling around B.C. fish farms after the release last month of a graphic video showing blood from a fish processing plant being released into the ocean. The video, by Tavish Campbell, an independent film maker and resident of Sonora Island, showed bloody effluent flowing from a plant on Brown’s Bay in the Discovery Islands, a major route for the migration of wild salmon.

Samples of the effluent were sent to the Atlantic Veterinary College and tested positive for PRV.

In a press statement, industry spokesperson Dunn said wastewater from fish farms and processing plants is now treated before release. Controls were introduced in 2011, he said in a prepared statement.

“Having viewed the video, I understand why people are concerned about the effluent being discharged from fish processing plants. While the wastewater remains red in colour, the water being discharged from Brown’s Bay Packing Company is treated to remove solids and ensure pathogens are neutralized.”

Fisheries Minister Dominic Leblanc told the Canadian Press he “is open to making additional changes to the Fisheries Act to ensure nothing flows into the water that is toxic to the already-threatened Pacific wild salmon.”

But the federal government is currently in court defending the industry’s right to transfer PRV-infected fish to open-net pens.

In 2016, Morton sued the department, claiming it was breaking the law by not testing farmed salmon for PRV before allowing them to be placed in net pens in the sea. 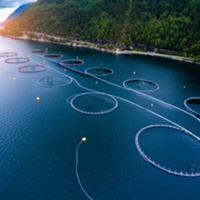 Why Is a Norwegian Disease on a BC Fish Farm Such a Big Deal?

Marine Harvest and Japanese-based Cermaq have joined the DFO in fighting the lawsuit. The companies claim in court affidavits that their business operations will fail if they can’t put infected fish into the ocean.

Morton’s lawsuit is based on a 2015 Federal Court ruling that found the DFO wrongly delegated responsibility for deciding whether to release infected fish into the ocean to Marine Harvest. The Federal Court gave the DFO until September 2015 to revise licences granted to the company.

Morton sued the DFO again in 2016, alleging its failure to comply with the ruling is putting wild salmon at risk.

Scientists note that both the feedlots for poultry and aquaculture confine large numbers of animals at high densities for economic reasons.

Research has found that crowding stresses the animals and depresses immune responses, which combine to make it easier for emerging diseases such as PRV take hold and spread.