A truly representative government would have respected the evidence collected by the Site C inquiry and terminated the unneeded $10.7-billion megaproject, says Marc Eliesen, former CEO of BC Hydro.

It would also have brought in fresh leadership at BC Hydro and rescinded the Campbell government’s Clean Energy Act, said Eliesen.

In approving the Site C project, the NDP government ignored three lines of key evidence presented during the brief and constrained BC Utilities Commission inquiry on the megaproject, he said.

Two technical reports prepared for the BCUC by Deloitte LLP said the dam was not needed and was at high risk of delays and cost overruns.

Reports by Deloitte and the BC Utilities Commission also confirmed the startling bad economics of megaprojects, which uniformly tend to run over budget, behind schedule and don’t deliver the promised benefits.

Recent Canadian hydroelectric projects have experienced cost overruns ranging from 55 to 72 per cent.

Newfoundland’s troubled Muskrat Falls dam and Manitoba’s Keeyask dam not only went off the rails in terms of costs but now threaten government credit ratings and will result in punishing rate increases for electrical consumers.

Last October, the final report of the Site C inquiry panel also found that Site C, then budgeted at $8.9 billion, was no exception to the rule: it was already over budget and behind schedule and would likely experience further cost overruns and may not be completed by 2024.

It also found that BC Hydro’s electrical demand forecasts were not reliable and there would be no real domestic demand for the dam’s power until 2030. It ultimately described the project as “high risk” due to its complexity, geotechnical problems and disputes with contractors.

A little more than a month after the inquiry’s final report the budget for Site C soared again to $10.7 billion.

“The evidence is just so overwhelming,” said Eliesen, who worked in the industry for more than four decades, serving as chair and CEO of Ontario Hydro, chair of Manitoba Hydro and chair and CEO of the Manitoba Energy Authority.

“Why didn’t they accept the recommendations?”

Eliesen suggests that there was a “pre-determined orientation” among the premier’s inner circle to approve the dam for “self-serving political reasons that smack of old school politics.”

The Site C inquiry reached no such conclusion, says Eliesen, and the “new analysis” has never been made public.

Based on the evidence, a representative government would have made the following five decisions on Site C, Eliesen said.

1)  Terminate the project and stop throwing good money after bad.

The province has already spent $2 billion on the dam and it would cost less than $1.8 billion to restore the river valley. Finishing the project could cost $8 billion to $10 billion with no promise of a reasonable economic return or even a market for its expensive power.

“There is no business case for this project,” said Eliesen,

The Site C panel concluded alternatives such as solar, wind and geothermal, as well as conservation, “could provide similar benefits to ratepayers as the Site C project with an equal or lower cost.”

The inquiry also noted that the government had other cheaper ways to meet future energy needs such as repatriating some or all of the Columbia River Treaty entitlement. This energy is generated from water stored behind BC Hydro dams and is now sold to the U.S. It “is as firm and flexible as the energy from Site C,” said the inquiry.

The panel concluded that given the growing debt of BC Hydro, the costs of Site C would have a negative impact on rates for electrical consumers including “the likelihood that even nominal rate increases will increase energy poverty among B.C.’s low income households.”

It also warned that “In the longer term, a disruptive technology such as affordable utility — or home — scale storage technology could reduce the anticipated benefits of Site C, by allowing the production of non-dispatchable energy from renewables at declining prices.”

The panel concluded the costs of terminating or continuing the megaproject were equal for ratepayers unless “Site C finishes further over budget.” In just year two of a nine-year schedule, the project’s budget has already soared to $10.7 billion.

“This project is just a total boondoogle and the province needs to cut its losses,” said Eliesen.

2) Clean house at BC Hydro and among deputy ministers.

The same people who advised premier Christy Clark to proceed with Site C are still calling the shots behind the scenes, Eliesen said, including deputy ministers, BC Hydro administrators and much of the Crown’s board.

Although Horgan replaced Jessica McDonald as CEO and appointed Kenneth G. Peterson as the new board chair, BC Hydro is essentially being run by the same people who advised the previous Liberal government, he said.

Peterson formerly worked as CEO of Powerex, an electrical trading subsidiary of BC Hydro.

Chris O’Riley, the current president of BC Hydro, has been with the Crown corporation since 2007. His estimates on Site C budget and schedule have been consistently wrong, Eliesen said.

When BC Hydro submitted an 866-page report to the BCUC inquiry on Site C on Aug. 20, it declared the project on schedule and on budget $8.3 billion.

Five weeks later, on Oct. 4, O’Riley informed the commission that “BC Hydro has encountered some geotechnical and construction challenges on the project” and that costs had gone up to nearly $9 billion.

Eliesen said the entire BC Hydro board of directors should be replaced because “they failed to exercise their fiduciary responsibility.”

According to 2016 mandate letter from former minister Bill Bennett, BC Hydro was to “deliver Site C on time and budget.”

However, both Deloitte and the BCUC inquiry found that the Crown corporation had failed to keep costs to budgeted levels.

Taxpayers are ultimately liable for all debts incurred by BC Hydro.

Moody’s Investor Service reported in early 2017 that BC Hydro’s debt has increased from $8.1 billion in 2008 to a projected $18.1 billion last year.

The Crown corporation has about $5 billion a year in revenue and barely covers expenses.

The auditor general has criticized BC Hydro’s use of deferral accounts to push costs into future years, giving it an artificial appearance of greater profitability.

BC Hydro’s finances remain “among the weakest of Canadian provincial utilities,” according to Moody’s.

The Site C inquiry did not have a mandate to investigate BC Hydro’s accounting practices or the impact of its growing debt.

Harry Swain, who chaired the federal-provincial review panel on Site C in 2013-14, told the BCUC inquiry that if BC Hydro “were a regular publicly owned company, its stock would be delisted by now and its credit rating below investment grade.”

“Does the government want to continue with administrators and bureaucrats who have been repeatedly wrong about the costs of Site C?” asked Eliesen.

The BCUC inquiry found that BC Hydro system for forecasting electrical demand in the province was broken.

But the BCUC’s final report found that the accuracy of BC Hydro’s historical industrial forecasts “looking out three and six years has been considerably below industry benchmarks.”

Eliesen notes that BC Hydro’s forecasts have been wrong 77 per cent of the time and exaggerate the degree to which the province needs additional electricity.

BC Hydro has tried to justify building Site C on the grounds that more industrial power will be needed to electrify LNG projects.

But the inquiry found that the cancellation of LNG projects and changing global market conditions had “reduced the probability that the majority of BC Hydro’s forecast LNG load will materialize.”

“We need a better method of estimating needs that relies on cheaper technologies located closer to the communities requiring the electricity,” said Eliesen.

The inquiry also found that BC Hydro’s expected compound growth rate for the residential, commercial and light industrial sectors was “significantly higher than the flat or declining growth rates forecast in other North American jurisdictions.”

BC Hydro forecasts have been so far off that it is paying Independent Power Producers not to produce power because of oversupply.

The Association of Major Power Consumers of BC advised the inquiry that “a portfolio consisting of scalable elements that can be rapidly deployed to meet actual capacity and energy needs as they materialize will be more likely to produce lower costs to ratepayers than a portfolio consisting of a single large, long-lead time project, even if it has a lower unit energy cost over its life.”

“We need a better method of estimating need in this province,” adds Eliesen.

4) Establish a BC Energy Authority.

“We need a government body to deliver demand side management initiatives promoting energy efficiency and conservation that would reduce the electricity needs of B.C. households and businesses and save money,” said Eliesen.

Such an authority would take over the existing Power Smart Program operated by BC Hydro, with staff moving over to the new authority.

After similar concerns were raised about Manitoba Hydro, the government last year established an independent energy authority known as Efficiency Manitoba. It promotes the efficient use of energy and develops programs and services to assist households and businesses in reducing energy consumption.

The province is now working with a dangerous piece of legislation that was created to push Site C forward, said Eliesen.

The Clean Energy Act, passed by the Campbell government in 2010, politicized electrical decisions in order to facilitate the Site C project.

It stripped the BC Utilities Commission of most of its key oversight powers.

In addition, it limited BC Hydro’s ability to build new generating facilities and removed the gas-powered Burrard Generating Station from its Integrated Resource Planning — a project cable of producing almost as much power as Site C.

The law also mandated that 93 per cent of the province’s electricity must come from “clean and renewable energy sources,” even though the science does not regard dams as clean.

The Site C bias engrained in the Clean Energy Act extended to the BCUC inquiry. 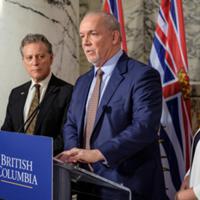 Year End Interview: Horgan Looks at Site C and Beyond

The Horgan government constrained the Site C review by mandating that the BCUC must adhere to the energy goals of the Clean Energy Act.

As a result, the BCUC couldn’t explore existing and cheaper options to increase electrical capacity such using the Burrard Generating Station, B.C.’s electrical entitlement under Columbia River Treaty or adding a turbine at the Revelstoke Dam.

If the Burrard Generating Station had not been removed from BC Hydro’s Integrated Resource Plan, there would be no need for Site C, Eliesen said.

“There would have been no scenario upon which the construction of Site C could have been justified,” wrote Eliesen in his second submission to the BCUC.

Before becoming premier, Horgan served as the NDP energy critic. In that role he said there was no rationale for retiring the Burrard Station because the facility provided an important safety net for electrical energy users.

Horgan also complained that as a result of the act’s provisions removing independent BCUC oversight, politicians would be making ad hoc decisions at the cabinet table.

“This law has to be disallowed and a new act created,” said Eliesen.