As the fentanyl epidemic spreads across Canada, a pioneer of supervised injection sites says the country would be better prepared to deal with the opioid crisis if it hadn’t suffered “10 years of darkness” under the Stephen Harper government.

Independent Senator Larry Campbell oversaw the establishment of Vancouver’s first public safe injection site, Insite, in 2003 after being elected mayor, building on the work of his predecessor, Philip Owen.

But they have all opened since 2015 as the fentanyl crisis brought record overdose deaths, particularly in British Columbia. Almost 2,000 people in the province have died of overdoses since January 2016, with 1,103 deaths so far this year.

Campbell says the Conservatives aren’t to blame for the arrival of fentanyl, but the Harper government’s opposition to harm reduction measures hampered Canada’s ability to respond to the crisis.

“Certainly if they had been more progressive in their drug policy I think we could have dealt with it, and if we had supervised injections sites and if we’d have had opioid treatment, I think it would have made a difference,” he said. “But it's all hindsight.”

Plans for a supervised safe injection site in in Vancouver’s Downtown Eastside were a major issue in the 2002 municipal elections that saw Campbell, a former coroner, elected mayor.

The site was able to open due to a exemption from the Controlled Drugs and Substances Act provided by the then Liberal federal government. Campbell said at the time that he was expecting such facilities to crop up around the country.

In 2006, the Conservatives, who opposed safe injection sites, were elected. In 2008 health minister Tony Clement called the site an “abomination” in a video recorded at an AIDS conference.

The Conservatives launched a series of legal attacks on Insite, ending with a Supreme Court of Canada decision that the government’s effort to close the site violated users’ charter rights.

The Conservatives also introduced a Respect for Communities Act to make it harder for new safe injection sites to be opened. The Liberal government reversed the legislation in May.

Campbell pointed out the Conservatives even stopped using the term “harm reduction.”

The Conservatives’ did not provide a response to Campbell’s when asked, but the party's views don’t seem to have changed.

Scheer told CBC News he thinks Canada should move past “supervised injection, where government makes it quote unquote safer to inject illicit drugs” and focus on helping people get off drugs.

He said supervised injection sites continue the cycle of addiction.

It’s hard to say how many lives more injection sites around Canada could have saved in the last 15 years, Campbell said. But he noted that Insite has seen more than a million injections and not a single death.

Fifteen years later his regret is the city didn’t go big enough from the start.

“I wish I had done four or five,” he said. “I think we would have seen a significant difference in the Downtown Eastside.”

He cautions safe injection sites are not “a silver bullet” for opioid addiction and also regrets not pushing for opioid replacement therapy at the time.

Under the Liberal government safe injection sites are popping up across Canada.

There are now 18 operational sites and 11 applications being reviewed. The city of Ottawa has one site operating, one awaiting inspection and a third in the review process.

The Shepherds of Good Hope, an advocacy organization for those on the street or in dire situations, hopes to operate one of the sites currently under review. The injection site would be housed in a trailer and be open 24 hours a day. The application was filed by Ottawa Inner City Health, which provides health care to the city’s street and homeless communities.

The site is a short distance from Parliament Hill, but feels like another world. The neighbourhood is in the grip of addiction. Addicts in tattered clothing rest in groups on the bare concrete. The wounds of addiction and hard living are not hard to spot.

The longer the wait for government approval, the greater the risk to lives, said Deidre Freiheit, CEO of Shepherds of Good Hope.

Not long ago the area would have seen a handful of overdose deaths in the course of a year and now it’s a daily occurrence, she said.

Freiheit said 500 people have been trained to use naloxone to reverse the effects of an overdose and staff have been “run off their feet” responding to overdoses in the community, logging 75 “reversals” from overdoses since the end of September alone. 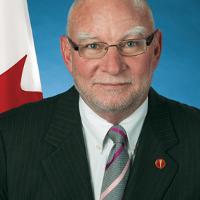 “We need to have the service in now,” Freiheit said.

Just a few years ago nobody would have even tried to open a safe injection site in Ottawa, she said, and the resistance to the idea has frustrated outreach workers for years.

It was difficult to convince the local populace of the benefits of safe injection sites, Freiheit said, but people are beginning to see its importance.

“Over the summer people are understanding there is a crisis, maybe better than they had before,” she said. “I still think there’s a stigma attached. We've got a lot of work to do.”

As Ottawa takes its first steps down the safe injection road, Campbell is focused on furthering harm reduction treatment and supporting the idea of legalizing opioids

The injection sites were a good start, he said, but not the end game.

In February Campbell told The Tyee he would be pushing for the legalization of opioids.

“What we really want to see is a change in how we deal with drugs,” he said. “That’s a process, it’s not going to happen overnight.”