NDP leadership contender Jagmeet Singh’s campaign says it has signed up more than 47,000 party members in the past 13 weeks of the leadership campaign.

That’s more than a third of the current membership that can vote in October.

In a statement released late Tuesday, Singh’s campaign team said most of that support draws from ridings the Liberals claimed in the last federal election.

“Most of this growth came from areas that the Liberals won in 2015, demonstrating the appetite for change across the country and Jagmeet’s ability to mobilize Canadians behind a re-invigorated NDP,” it said. 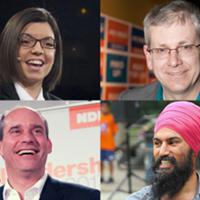 The statement said that his organizing team consisted of 3,259 volunteers, more than 1,147 “growth captains,” and 73 organizers led by two field directors.

During the last party debate on Sunday in Montreal, when challenged by Charlie Angus on what he would do if he loses the race — run federally or return to Toronto — Singh twice said that he wouldn’t lose. These numbers no doubt fuelled that confidence.

Even still, NDP leadership contenders will still need to make sure they can get out the vote for the October race.