Industry and government claims that Kinder Morgan’s Trans Mountain pipeline expansion will boost prices for heavy Canadian crude have no basis in reality, says one of the nation’s top energy analysts.

In a brief yet damning report David Hughes, a former federal government energy researcher, concluded that tripling the pipeline’s capacity won’t deliver an extra $73 billion in revenue over two decades as claimed by Kinder Morgan.

The company and the Alberta and federal governments have promoted the pipeline with the argument that it would let tarsands producers reach new markets and increase prices.

But Hughes said the claims are based on false assumptions and fail to reflect changes in global oil markets.

“I don’t think it is too late for the federal government to rethink Kinder Morgan,” said Hughes in an interview. “That’s why I’ve revisited the data in a non-prejudicial way.”

The controversial $7.4-billion project proposes to triple the amount of bitumen pumped to the British Columbian coast from Alberta’s tarsands.

But since then the economic prospects for the pipeline have gotten weaker, says Hughes.

In his review Hughes took a hard look at a September 2015 analysis done by Texas-based global consulting firm Muse Stancil that Kinder Morgan submitted to the National Energy Board.

The Muse Stancil report estimated the pipeline could increase producers’ revenues by $73 billion by opening up Asian markets and increasing North American prices.

But Hughes reports the analysis was based on several assumptions that are no longer valid.

The Muse Stancil report acknowledged that the construction of other export pipelines would invalidate the report’s price calculations, Hughes notes.

Unlike the Trans Mountain expansion, “these projects do not cross mountainous terrain with its higher environmental sensitivity, nor do they rely on tankers to move the oil,” noted Hughes.

Heavy bitumen, a junk crude, sells at a discount because it costs more to transport and refine. Heavy oil priced in Alberta costs $11 to $14 a barrel less than conventional West Texas Intermediate oil priced in Oklahoma.

The Muse Stancil report also concluded the expanded pipeline could reduce the gap between higher international (Brent) oil prices and North American (WTI) oil prices which arose between 2011 and 2014 due to temporary pipeline bottlenecks created by increases in U.S. fracked oil production and concerns about the safety of aging pipelines.

Recent developments, however, have eliminated the differential.

With the construction of the southern leg of the Keystone XL pipeline and the development of Seaway Crude Pipeline System, bottlenecks have disappeared. The price differential has retreated from a high of over US$20 per barrel in 2012 to an average of 82 cents in 2016.

The Muse study projected an ongoing price differential of $5 to $8 a barrel over the first 20 years of the pipeline.

Since it costs more to ship bitumen to Asia than it does to the U.S., Canadian producers would actually receive less for their oil using Trans Mountain, the report found.

“The pipeline plus tanker toll to northeast Asia is over US$8 per barrel, whereas the toll from Hardisty, Alberta to the U.S. Gulf Coast is between US5.68 and US$6.95 for committed shipments,” explained Hughes.

Hughes’s study concluded that Canada does not need the Kinder Morgan project or other tidewater pipelines such as Energy East.

“The U.S. is not unfairly discounting Canada’s oil and no Asia price premium exists,” Hughes wrote. “The construction of the Line 3 expansion and Keystone XL pipelines with the Trump administration’s support will allow access to the highest prices available and provide surplus export pipeline capacity. Politicians knew this information, or should have known it, when Trans Mountain was approved in November 2016.”

Hughes, an energy analyst and earth scientist with a record of accurate and reliable energy reports, worked for 32 years for the federal government where he directed research on unconventional gas and coal for Natural Resources Canada until he retired in 2008. He prepared the report for Corporate Mapping Project, which is jointly led by the University of Victoria, Canadian Centre for Policy Alternatives and the Parkland Institute.

Instead of approving projects that liquidate valuable resources for short-term political gain, the federal government needs to develop a credible energy plan for all Canadians, added Hughes.

Hughes’s analysis reinforces the findings of other economists who challenged the Muse report and the NEB’s uncritical adoption of its economic scenarios.

Independent economist Robyn Allan, for example, was among the first to debunk the argument still employed by Alberta’s NDP government that Trans Mountain would bring increased prices and that Canada was stuck taking a discounted price from U.S. buyers. 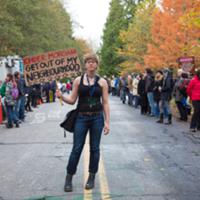 “Oil price and supply evidence continues to clearly show there is no economic case for the Trans Mountain expansion project. Moreover, there is not a market for Alberta’s bitumen in Asia,” Allan told The Tyee.

She said the National Energy Board conducted an unreasonably narrow review, relied on flawed analysis, failed to test the evidence it had before it and did not seek timely and reliable data.

In her 2016 economic review of the Kinder Morgan project for the Tsleil-Waututh Nation, Allan concluded that the project would have “a net negative impact on the Canadian economy because its economic benefits do not outweigh its economic costs or economic risks and because it is not needed to deliver crude oil to market.”

Despite these findings, Alberta Premier Rachel Notley continues to argue that the economic case for Kinder Morgan is “exceptionally strong.”

However, prospects for the project are worsening.

The NDP and Green alliance set to form government in B.C. has pledged to oppose the pipeline expansion.

Meanwhile municipalities, First Nations and other civil groups have launched legal actions to block the project.

The pipeline is now the subject of 19 separate legal proceedings, including seven challenging the National Energy Board’s go-ahead for the project and nine challenging the federal cabinet’s approval. Another three cases have challenged the B.C. provincial approval granted by the BC Liberal government.

Some investors are also raising doubts about the ability of Kinder Morgan’s Canadian subsidiary to raise money for a megaproject originally billed at $5.5 billion. Kinder Morgan now says it will cost at least $7.4 billion.

The Canadian subsidiary is already $1.4 billion in debt while the Houston-based parent firm reports that its net debt ($35 billion) represents 81 per cent of the company’s $43-billion market value.