Politicians who advocate for more bitumen pipelines and LNG exports are making a "have your cake and eat it too argument" because there is no way Canada can meet its climate change commitments under such a scenario says David Hughes, one of the nation's top energy experts. 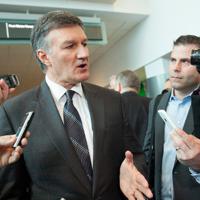 Even building just one LNG terminal coupled with modest oil sands growth would increase oil and gas emissions from 26 per cent of Canada's total greenhouse gas emissions in 2014 to 45 per cent by 2030.

Under such a scenario, as forecasted by the National Energy Board, the rest of the economy would be forced to contract its emissions by 47 per cent in order to meet promised greenhouse gas reduction targets set by the Paris talks.

"This level of reduction is near-impossible without severe economic consequences," concluded Hughes in a new report for the Canadian Centre for Policy Alternatives (CCPA).

In other words the cheapest and most sensible approach to reducing greenhouse gases from current 732 megatonnes to a 2020 target of 620 megatonnes involves shrinking the oil and gas industry by limiting bitumen extraction, and not building more pipelines.

Canada's politicians need to "rethink the expansion of oil and gas production if we are going to be serious about meeting our Paris commitments," Hughes told The Tyee.

"Canada still needs oil and gas and it is more than self-sufficient in satisfying its own requirements. But ramping up exports is not an economic winner when you consider climate change and oil revenue in general. We need a long-term plan as opposed to short term hell-bent growth that damns the consequences."

Hughes, an energy analyst and earth scientist with a public record of high reliability, worked for 32 years for the federal government and headed research on unconventional gas and coal for the Natural Resources Canada until he retired in 2008.

Since then his independent reports, which have challenged industry and government hubris on a number of energy matters, are often quoted in publications as varied as Nature, The Economist, the Los Angeles Times, Bloomberg, USA Today and The Tyee.

His latest number crunching report not only answers the question "Can Canada Expand Oil and Gas Production, Build Pipelines and Keep Its Climate Change Commitments?" with a clear no but does so with public data available from the National Energy Board and Environment Canada.

But based on data provided by the National Energy Board and the Environment Canada Hughes found that there was no way that Canada could build more pipelines and meet promised global reductions in greenhouse gases.

"Nobody seems to be doing the math and that's why I did the report to put the numbers together."

Hughes argues that there is enough existing pipeline and rail capacity to handle a 45 per cent ramp up in the oil sands production. "The additional pipelines being lobbied for by industry and governments are therefore not necessary."

Hughes also debunks the myth that getting bitumen to tidewater ports will somehow increase the global price that Canada's gets for its low-grade bitumen.

For years now pipeline advocates have argued that getting cheap bitumen or heavy oil to eastern refineries would be highly profitable due to the price difference between West Texas Intermediate, the North American benchmark and North Sea Brent, the global benchmark for oil.

But in the last two years that difference has largely disappeared with the completion of U.S. pipelines to Gulf Coast refineries combined with the removal of a ban on U.S. raw oil exports. That long-term ban often kept crude oil bottled up on the continent.

Even the federal government admits that the money rational for an Energy East pipeline, for example, has vastly changed in secret memos obtained by Bloomberg last month:

"The benefits of building the pipeline would be greater if the price between WTI and Brent would be as large as that observed in 2011 and 2012," said a December 10, 2015 document marked secret, reported Bloomberg.

"Bitumen sells at a substantial discount because its heavy, highly viscous nature, and high sulphur content make it more costly to refine," explained Hughes in the report.

"This reality will not change even if large volumes reach tidewater for export, as the difference in price that existed over the past few years between the inter- national benchmark -- Brent Crude -- and North America's benchmark -- West Texas Intermediate (WTI) -- which did provide a premium for tidewater access over the past few years, has now been reduced to almost nothing."

"The assertion by politicians that tidewater access enabling overseas exports will somehow confer a significant price premium for Canadian oil is therefore not supported by the facts," noted the report.

Canada currently produces about four million barrels of oil a day but 61 percent of that volume comes from high cost and carbon intensive mining in the tar sands.

The country exports about nearly three quarters of what it produces to the United States, and primarily as a raw feedstock for U.S. refineries.

Flint Hills Resources, a company owned by the U.S. billionaire Koch brothers, remains one of the largest refiners of raw Canadian bitumen at 320,000 barrels a day.

As Canada exports more raw bitumen south of the border to U.S. refineries, the U.S. has increasingly exported more refined petroleum products to Canada. Annual U.S. exports to Canada have increased from 50,000 barrels a year in 2004 to 200,000 barrels in 2015.

"The widely recited rhetoric that Canada must continue its de facto energy strategy of liquidating its remaining nonrenewable resources as fast as possible to maintain the economy has no credibility," concluded Hughes in his report.

"Canada has never produced more oil, yet government revenues from the industry have collapsed. Yes, prices are low and that is affecting the industry, but nothing can be done about that given that prices are set globally. Maintaining the notion that only ever-expanded exports can rescue the Canadian economy ignores fundamental price realities as well as eliminates any chance that Canada will meet its emission-reduction targets under COP21."

The report echoes many of the conclusions reached by former CIBC economist Jeff Rubin in his recent report on the future of the tar sands. It called pipeline expansion an economic folly.

"As one of the most costly oil sources in the world, the resource is also one of the most vulnerable to plunging oil prices," wrote Rubin. "Improvement, no matter how impressive, in either its own carbon emissions or in Canada's overall emissions performance, will not remedy that vulnerability in any meaningful sense."

To produce a viable return on investment new bitumen projects require oil prices between $68 and $100 per barrel.