The Forest Practices Board has found Lemare Lake Logging Ltd.’s operations in the East Creek Valley on northern Vancouver Island met provincial standards, but that the company had failed to follow the law requiring it to provide public access to its site plans.

“The board concludes that the licensee did not provide the complainant with reasonable access to [site plans] ‘on request at any reasonable time’ as required by [the Forest and Range Practices Act],” concluded the report released this week.

“The investigators found that, for a variety of reasons, the complainant was unable to view the [site plans] for over six months,” the report said. “When the viewing took place, the licensee did not provide [site plan] maps and did not permit copying of the site plans.”

Lemare holds a licence to log on publicly owned land in East Creek Valley which borders Mquqᵂin / Brooks Peninsula Provincial Park on the west side of northern Vancouver Island. Logging in the area has been controversial since at least 2003, when the Wilderness Committee campaigned to protect it.

The Tyee reported last May that Mark Worthing, a biodiversity and forestry campaigner with the Sierra Club of B.C., had complained to the Forest Practices Board about both the lack of access to documents and the company’s logging practices. 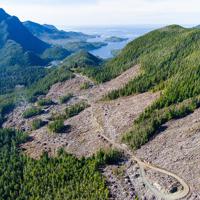 The board found the company’s operations had complied with the Forest and Range Practices Act and the Vancouver Island Land Use Plan, but that the company failed to meet the requirement to give Worthing reasonable access to its plans.

An official with Lemare, which is based in Port McNeill, said nobody from the company was available Thursday afternoon to answer questions.

Worthing said the findings about the company’s logging practices were disappointing, but not surprising considering how the government has weakened regulations. “We’re really disappointed with the fact it’s legal,” he said. “I had thought maybe the cumulative impacts aspect would have shown up more.”

The board’s report should have been tougher on the company for failing to meet disclosure requirement, he said. “They denied access to members of the public,” he said. “I think there should be some sort of reprimand for that. I want to see if they’ll actually reprimand them.”

Forests Minister Steve Thomson can levy up to a $10,000 fine for a failure to provide access to a site plan under the Forest and Range Practices Act. Last May a spokesperson for the ministry said they believed the matter had been resolved.

Nobody from the ministry was immediately available late Thursday afternoon to say what if any consequences there could be for the company as a result of the Forest Practices Board’s finding.