“These are not simple pieces of equipment, and there’s no excuse for that,” Nenshi said. “It’s trespassing on private property, it’s stealing from governments and from people, and it’s unbelievably dangerous. That kind of behaviour cannot be held acceptable. It’s not acceptable protest behaviour.”

Nenshi was in Victoria to take part in a panel discussion titled “Wellness Matters: A Dialogue on Connection, Belonging and the Power of Wellbeing,” where he promoted a “3 Things for Canada” campaign encouraging people to take actions to improve their communities and country in honour of Canada’s 150th birthday.

Helps, who said her personal preference was that as much fossil fuel as possible remain in the ground, said at the time that the pipeline is too risky. “It is not worth the risk to British Columbia’s economy or ecology.”

Activists from the group Climate Direct Action, at least nine of whom were arrested according to the group’s website, said they felt “duty bound” to use direct action to halt the extraction and combustion of fossil fuels in the absence of political leadership or legal mechanisms to prevent disastrous climate change.

In an interview ahead of the Victoria panel discussion, which only mentioned pipelines in passing, Nenshi said protester opposition to moving Alberta oil is frustrating.

“A very small group of people have demonized one particular product in a way that is not logical,” he said. “That is very, very challenging. I don’t see these protests against the rare earth metals that go into your cellphone, where people are dying because of poor environmental and labour conditions.

“I know that sounds trite, but it is very weird to me that you’re allowing a three-foot-wide pipe to bear all the sins of the carbon economy,” he said. “It’s not about symbolism, it’s people’s lives and people’s jobs and the prosperity of this country. If you want to pick a symbol, pick a symbol that does less damage.”

In eastern Canada, where TransCanada Corp.’s proposal to build the Energy East Pipeline has run into opposition, many people fail to realize where the gas they use comes from, said Nenshi, who taught business before entering politics.

“Depending on the market the sources change, but these days it’s mostly Venezuela, Algeria, Saudi Arabia,” he said. “When you look at the transportation emissions and cost [to ship it by sea to Canada], it’s much more so than shipping it by pipeline, even though somehow the Alberta oil is the dirty oil.”

He declined to comment on conditions in the countries where Canada’s oil imports come from, other than to say, “We have the best environmental, labour and human rights standards really of any energy producer anywhere.”

For the time being, Canadians remain dependent on oil, he added. “The question you have to ask yourself is where you want those fossil fuels to come from and what kind of standards should those have to have?”

Opposition to the increase in oil moving through the port of Vancouver that would come with the twinning of the Trans Mountain Pipeline is strange given that the port is already one of Canada’s busiest and already ships large amounts of materials like sulphur and caustic soda, Nenshi said.

“I don’t know what that [caustic soda] is, but it’s one of the number one things they ship out of there and it sounds nasty,” he said. “What happens when you spill sugar in the water? Fish don’t like it much.”

If the pipeline goes ahead, the increase in oil tanker traffic would be seven-fold, he allowed, but pointed out that would mean going from the current one tanker a week to seven. 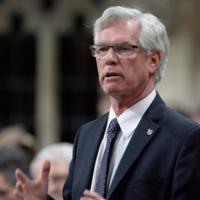 Nenshi said building pipelines would help producers get a better price. “I’d rather get $50 [a barrel] than $30 for stuff that we’re selling anyway,” he said. “The reason we don’t get it is lack of access. Closing that gap means government royalties that would help eliminate all federal and provincial deficits in this country. At some point you’ve got to ask yourself, is putting our grandchildren’s future in hock because of government debt worth symbolizing this one source of energy over others?”

He also said he fails to understand how Premier Christy Clark’s B.C. government is fully in support of building pipelines to carry liquefied natural gas, but not oil.

The debate on pipelines will continue, Nenshi said, noting he’s scheduled to talk to the Vancouver Board of Trade in November. “I’ll be in Vancouver next month and there’ll be more drama talking about that,” he said. “We’ll have a good conversation about that. [Vancouver Mayor] Gregor [Robertson] won’t like it much.”