Premier Christy Clark won the provincial election in 2013 promising a “Debt-Free BC,” but an opponent now accuses her of overseeing a “historic debt binge” since coming to office.

Dan Brooks, who won back the BC Conservative Party leadership on Sept. 17 after stepping down earlier this year, said in a press release that last week’s first quarterly report shows the province’s total debt has grown by 45 per cent — $20.1 billion — under Clark.

The total debt includes accumulated operating deficits from past years as well as borrowing for any number of purposes, including building schools, hospitals, social housing and public transit. It also includes “self-supported debt” such as that carried by Crown corporations including BC Hydro.

Finance Minister Mike de Jong, commenting on the quarterly report, highlighted the operating surpluses that mean the province has stopped adding to the operating debt. He also pointed out that taxpayer-supported debt has been dropping when expressed as a percentage of the province’s Gross Domestic Product and is lower than in most provinces.

Brooks was unavailable Tuesday, but in the press release said: “From the moment she first took office in 2011, Christy Clark has been spending taxpayers’ dollars in a misguided, reckless manner... If somehow she is able to secure another four-year mandate in 2017, there can be little doubt that the BC Liberals will perceive it as permission to leave an even larger legacy of debt for future generations.”

Jordan Bateman, the B.C. director for the Canadian Taxpayers’ Federation, said most voters don’t make a distinction between operating debt and other kinds of debt. “I think for most people, debt is debt.”

The government deserves credit for balancing the budget, Bateman said, but by running on a promise to make the province debt-free Clark set herself up for criticism. 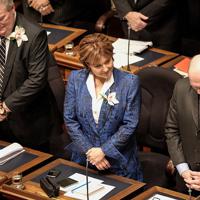 “You can’t run a campaign on a ‘Debt-Free BC’ and then not be held to account for the debt increasing,” Bateman said. “You can’t run on being a debt-free province, then not show any sign of the debt reducing.”

Bateman said he worries that by borrowing large amounts of money for projects like the Site C dam or the George Massey tunnel replacement, the government is committing future generations to paying for them, even if technological changes make them unnecessary. “When you borrow money you’re making spending decisions for future governments,” he said. “You lose that flexibility to deal with what happens in the future. I worry about that.”

The next provincial budget, expected in February, needs to show the province has turned the corner on debt and is ready to start reversing the federation’s debt clock, he said.

Iglika Ivanova, an economist Canadian Centre for Policy Alternatives’ B.C. office, said a more nuanced discussion of debt is needed. “Just looking at what’s happening to debt is not very instructive. We have to look at why.”

Some projects, such as school upgrades or bridges, will be used for 50 years or longer, Ivanova said. “No matter how good an economy we have, we can’t pay for them all in cash today,” she said.

Future generations will benefit from those kinds of projects, she added. “It’s completely appropriate for them to share in paying for them.”

There’s also a strong case to be made for going into debt to spend on social infrastructure, such as child care, education, public transit, housing and poverty reduction, she said. “Acting on all these issues will strengthen the economy for the future,” she said. The government has failed to invest enough in those areas for many year, she added.

Ivanova said while she disagreed with incurring debt to pay for the Site C dam, it made sense for a government committed to adding infrastructure to power mining and liquefied natural gas projects. “You can’t have major projects without incurring debt.”

The problem isn’t debt, but what the money buys, Ivanova said. "”It is really important to consider what the debt is for,” she said, noting that interest rates are low right now and the province is in good financial shape. “It’s totally OK to take on debt if you’re spending it on something useful.”

Ivanova said that it’s true Clark has failed to deliver on the promise to use resource revenues to create a fund for future generations. But the idea that the province would in short order become debt-free is “just not realistic,” she said.