A collection of organizations hopes a new guidebook for educators will help fight Islamophobia and its effect on Muslim children in Canadian classrooms.

The National Council of Canadian Muslims, the Islamic Social Services Association and the Canadian Human Rights Commission worked on the guide, which also suggests ways for educators to better support recent refugee children.

The Canadian Red Cross provided funding for the project.

Amira Elghawaby of the council told The Tyee that along with the high-profile story of a Toronto teacher being fired for anti-Muslim tweets last year, she’s heard other stories of educators singling out Muslims in the classroom.

Elghawaby said in one case, a Muslim child told his parents that a teacher warned their students that refugees from Syria could be terrorists.

In another, a substitute teacher in Winnipeg tried pulling the hijab, a cloth piece of headgear, off of female students.

On some occasions when parents have approached teachers to propose a presentation for students to help them better understand the Muslim faith, they have been coldly received, she said.

But other teachers have been asking the council how they can address Islamophobia and support Muslim students in the classroom, which is in part what led to the guide’s creation, she said.

“This guide really came out of an interest to ensure there’s something educators can go to,” Elghawaby said. “It provides information on what it’s like to be a young Muslim person in Canada these days.”

The guide is available free online in French and English.

It notes that many Muslim students are ostracized and suffer from additional stress because of Islamophobia, which has forced the children in “defensive positions.”

That can mean they feel compelled to apologize for things they had no part in, or “forced” to prove their loyalty to Canada, which the guide says is something other Canadian children don’t need to do.

It goes on to focus on Syrian refugees and explains signs and symptoms of trauma, grief or depression that the recent arrivals in Canada could be facing due to violence in their former homes. 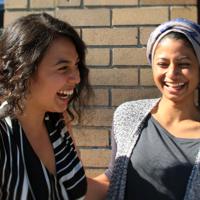 'To Be a Muslim Woman Is an Act of Resistance'

The guide suggests ways to help mitigate the emotional impact on Muslim children, beginning with acknowledging that Muslim students, particularly refugees, can be suffering from trauma and feeling marginalized among their peers.

Rhetoric in last year’s Canadian federal election as well as that of United States’ presidential candidate Donald Trump has led to increased pressure on Muslim communities in Canada, Elghawaby noted.

She said the issue is an ongoing challenge, but educators are paying attention to it now and looking for ways to help.

“Those are our classrooms; they are a microcosm of the society that we hope we are,” she said. “This is just one more piece of a greater puzzle to ensure our schools and our communities are inclusive of everyone.”