A few weeks ago, I went to see author, rights activist and academic Monia Mazigh speak about Muslim women in fiction when her latest book tour stopped in Vancouver. At the end of the panel, the floor opened up to questions. 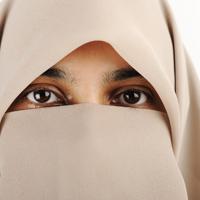 'My Niqab Gave Me a Voice'

In a room of about 30 people, every question posed to Mazigh was about only one topic -- the headscarf, or hijab, she chose to wear. Someone told her the scarf was introduced in 17th century Arabia as a means to cover the face from dust, and questioned what place it has in the world today; one informed her it's considered rude when strangers cannot see a person's eyes because of a niqab; another asked if she thought Stephen Harper was to some extent right in comments he had made.

I returned from the event thoroughly frustrated that a room of Canadians had such little understanding of someone's religion, and worse, they could not ask any other questions of an accomplished writer just because of her choice of headwear. In Canadian media, Muslim women are often reduced to a headscarf narrative that rarely involves the voices of diverse Muslim women.

This is the political climate in which I meet Tahia Ahmed and Romila Barryman, fellow Muslim women and co-founders of an event series called Letters to Khadijah. Ahmed and Barryman's cross-Canada art project aims to create safe dialogue between self-identified Muslim women through letter writing.

"The people who have entered our events so far have really talked about how they are striving to find a safe space, and with Letters to Khadijah, they have a safe space," says Barryman, 23, who is a writer and marketer in the tech industry, and owns her own publication called Textbook. "They can bring their full selves and their Muslim identities."

Barryman adds a Muslim identity may be "a very small aspect in terms of who they are, but that's the centre point that connects us all."

Ahmed, 22, a social activist and co-founder of a non-profit called ArtQuake, believes such conversations are necessary, so that Muslim women can reclaim their own narrative.

Khadijah, 'the mother of Islam'

At Ahmed and Barryman's first event in Vancouver, discussion centred around Khadijah, a revered figure among Muslims. Apart from being the first wife of the Prophet Muhammad, Khadijah was also the first believer in Islam. Participants in the sessions were first invited to talk about Khadijah and what she means to them, and then write a letter to her -- these could be rants, questions, musings.

The women at the event -- whose identities are protected here -- chose either to keep their own letter, or hand it over to Barryman and Ahmed, who will compile them into a book after their cross-Canada tour. The book, they say, will show non-Muslims and Muslim men alike how varied and complex Muslim women's lives can be.

I asked Barryman why they chose Khadijah as the centrepoint of this project. She told me Khadijah stands for a very different Islam than we know in the media. "Khadijah disrupts the normal Western narrative that we see about Islam right now. She [was] a very strong businesswoman, she was a huge decision-maker in terms of who she wanted to marry, she was a breadwinner in many ways, she was an emotional rock and the foundation of Islam itself," said Barryman. "[She] is sometimes only referred to as the Prophet's wife and the mother of Islam."

Barryman says Khadijah's identity is associated with the Prophet, but, "when you look at her as an individual, that complexity, is what we want to bring in these letter writing sessions," she says, "because that is who we are as well."

Held at Heartwood café on a sleepy Saturday afternoon, women from different walks of life, ethnicities, sexualities and ages discussed day-to-day difficulties they faced, but also highlighted the rewards in their experience. A few shed tears while expressing how important their religion was for them, as well as how grateful they were to have space to talk about Islam without having to be politically correct.

Freedom of speech was a recurring theme; a writer revealed the difficulty she had in counteracting Islamophobic sentiment in the media. Major outlets were reluctant to publish essays unless written by a representative of a mosque or a Muslim committee -- women's opinion as Muslims held less value. We explored how statements made by one Muslim man or woman are often taken to be the representative of all Muslim voices, instead of being appreciated as one voice in a universe of many.

I touched on my own online experiences, seeing acquaintances post social media diatribes about Islam in the wake of some recent news item. I often wonder if I should speak up, defend my religion and risk being viewed as some kind of radical, or keep my silence and feel extremely uncomfortable.

'Are you Muslim enough?'

Barryman noted pressures come from within the Muslim community, too. "You always want to defend your religion against the outsiders for they may have the wrong idea," she explained, "but you are also conscious that it's not all peachy within the many Muslim communities that exist.

"You also don't want to admit that, because it's often used against you."

Choosing not to "cover up" causes its own difficulty, she said, because so many assumptions depend on Muslim appearance. After the event, Ahmed revealed when she first met Barryman she had not known that Barryman was a Muslim, proving how complicated being a non-identifiable Muslim can be.

And with just Muslim women in attendance, discussion then turned to patriarchy inherent in Islam, which participants said ought to be recognised. One woman quipped that what surprised her was "how Khadijah, despite being in the 16th century, is ahead of us in 2015." Another questioned why every Muslim reveres the role of Khadijah in Islam, yet no sense of matriarchy evolved from her story. She added it was Khadijah who comforted her husband when he had a vision about being a prophet, and she convinced him to accept the role of God's messenger.

'We don't know every Muslim woman'

Ahmed and Barryman told me after the event that they are using the concept of writing to Khadijah for many reasons, one of which is "the fact that there is imagination involved," said Barryman.

I asked Ahmed if she feared backlash for reimagining a revered Islamic figure with the characteristics of a 21st century Muslim woman. "There is nobody in the world who can actually come up to Romila and I and say, 'Hey you're wrong' or come up to you and say, 'who you think Khadijah is, is wrong,'" she replied.

"That is at the heart of why this project is for Muslim women, because nobody can make those assertions... We don't know every Muslim woman."

Ahmed and Barryman will be taking Letters to Khadjiah online, launching tweets to the religious figure sometime during Ramadhan, which began yesterday. Following the holy month, Letters to Khadijah will have its first East Coast session in Toronto on July 25, moving onto Ottawa on July 27 and ending in Montreal on July 30, with plans to host future events in Kelowna, Victoria and even Saskatoon.

Ahmed and Barryman want to include as many voices as possible to show that across Canada there is a diverse, strong array of women who want to talk about their lives and what having multiple identities as Muslims, Canadians and women means. These conversations may even lay groundwork for a later discussion, one that confronts narrow and politicized understanding of Muslim women more widely.

But in the meantime, Ahmed says living and observing is challenging enough.

"To be a Muslim woman is an act of resistance," she says of the unspoken assumptions she experiences every day. "We live in these bodies and we live in them our entire lives. It's not just something that just happens to us, it's something that we live with everyday."