The RCMP has arrested and released four Indigenous protesters in the community of Ahousaht, B.C. for trying to obstruct a fish farm company from restocking an empty feedlot with new Atlantic smolts.

The incident happened Monday evening when Lennie John, Sacheen Seitcham and two other residents of the Ahousaht community protested at the Dixon Bay farm north of Tofino as a barge attempted to stock the previously closed farm with new smolts, or young Atlantic salmon.

The RCMP arrested the protesters the following day after the company, Cermaq/Mitsubishi, lodged complaints about the incident. Charges have not yet been laid.

Seitcham and her husband, Joe James Rampanen, told The Tyee in an email sent together that they participated in the protest “because it is our inherent right to protect wild salmon, it is our duty and responsibility to ensure we have Indigenous food security and we are upholding our rights to do so.”

The couple, who eat traditional foods from the ocean five days a week, said they had witnessed “a noticeable decline in herring and salmon runs and the shell fish beaches as well” after fish farms were allowed into their traditional waters nearly 20 years ago.

“It is the right of any human to protect their land and water. We will not be bullied or intimidated by this industry... We knew Cermaq would do this. It is a bad call on their part,” Seitcham said.

Laurie Jensen, a communications manager with Cermaq, said the company “received calls from the site on Monday night asking for help as militants were engaging in unsafe behaviour.” Jensen said she was not aware of the arrests.

Jensen offered no account of what happened but said that Cermaq will conduct its own investigation into the incident at the Dixon Bay facility, and that all “unsafe activity will be reported to the proper channels.”

The incident follows dramatic boardings of fish farms by the Musgamagw Dzawada’enuxw First Nation in the Broughton Archipelago on the other side of Vancouver Island over the last two weeks.

During the peaceful boardings, tribal chiefs delivered eviction notices to farms owned by Cermaq and the Norwegian multinational Marine Harvest.

The chiefs claim that high-density open-net fish farms pollute the ocean with disease and waste and threaten marine life and wild fish stocks. They have given the two foreign-owned corporations three months to close their operations.

Disease remains a persistent problem at corporate fish farms due to overcrowding and viral exchanges between wild and farmed stock.

Cermaq’s Dixon Bay farm, for example, was closed in 2012 due to an outbreak of infectious hematopoietic necrosis virus, also known as IHNv. The virus is carried by wild fish who show little evidence of disease. In contrast, the virus can wipe out 90 per cent of farmed salmon.

That same year the federal government paid $4.1 million to two other corporations for the loss of farmed fish from the same virus in B.C. waters. The federal government has compensated corporate fish farms for disease losses with nearly $100 million in payments since 2011.

RCMP media relations officer Tammy Douglas confirmed that four adults were arrested and released on Tuesday in the community of Ahousaht and that “a report will be sent to Crown Counsel for their review and charge assessment.”

In an email, Douglas added that the “RCMP respects the right to democratic and lawful protest and will continue to assess the situation to maintain public peace and ensure safety for all parties, including the protesters.”

One of the arrested protesters was Lennie John, the 47-year-old owner of a water taxi and whale-watching business.

Last year, John led a peaceful nine-day-long protest that eventually forced Cermaq to abandon its plans to anchor a new farm in Yaakswiis Bay. The group described themselves as the Yaakswiis Warriors.

John believes that fish farms, often located at the mouth of important wild salmon rivers, have a played a significant role in the well-documented decline of native salmon species in southern British Columbia.

As soon as John learned that Cermaq, a subsidiary of Mitsubishi Corporation, was restocking a closed farm in Dixon Bay without what he considered proper community consultation, he said he gathered three other protesters with the goal “of going to try to stop them.”

When John arrived at the farm in a 20-foot aluminum boat, he and fellow protesters found a barge emptying smolts into one of 12 pens, he said.

John said he got on the radio and asked Cermaq employees to halt, adding, “You are bringing smolts to a closed farm and you are trespassing in my territory.” 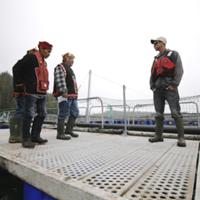 After a Cermaq employee asked John to get off the radio channel, John said he maneuvered his boat to the portside of the barge. Several members of his three-man crew then boarded the farm.

According to John, the barge then moved towards his small boat and he yelled, “Stop. You are putting us in danger.”

The barge then stopped, John said. Cermaq employees then told him that they were going to call the cops, he said.

“That’s good,” John said he replied, and his party then left the farm.

The next day, the RCMP arrested John and three other individuals for alleged mischief and intimidation.

“I have been charged for protecting our territory and that is my job, to steward the waters,” said John in an interview.

John added that he is not only at odds with Cermaq, but some of the leaders of Ahousaht who continue to support fish farms.

The Ahousaht First Nation currently has 16 fish farms operating in their territory. Some elected officials support corporate fish farms, while other members of the 1,000-strong community consider them a colonial presence and an ongoing threat to their culture and heritage due to the spread of disease and pollution.

The vulnerability of the industry to climate change and nutrient pollution in the ocean by other industries has been highlighted by catastrophic algal blooms, which killed millions of farmed salmon in Chile earlier this year. It was also a PR disaster for the industry.

Last June, Cermaq experienced a large die-off of farmed Atlantic salmon due to a toxic algal bloom at the Millar Channel and Ross Pass farms north of Tofino.

“Such a large bloom of this type of algae is unusual, and something we have not experienced before,” said Cermaq on its website.

Sacheen Seitcham responded to the arrest on her Facebook page.

“I’m not afraid nor ashamed or bullied and intimidated by Cermaq or their Ahousaht supporters... MY GRANDCHILDREN CAN BE PROUD TO SAY: MY GRANDMOTHER FOUGHT FOR ME!”