The Scouts are working up a sweat digging holes for young cedars and vine maples, while the Starbucks baristas are on their knees planting ferns. 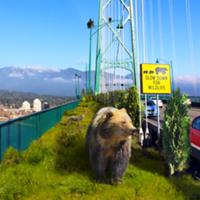 The "rewilding" of Everett Crowley Park, in the southeast corner of Vancouver, aims to make more space for wild things in the city's increasingly concrete landscape.

Or, as the [Vancouver] park board recently said, the project is part of its "vision for an urban environment in harmony with nature."

It's hard to imagine a more unlikely place.

Everett Crowley Park, which the board now describes as a "biodiversity hotspot," is home to one of the most abused chunks of real estate in Vancouver -- the old city dump.

There is a ravine filled with rotting garbage, an old tar pit, and near-impenetrable blackberry bushes and knotweed that dominate much of the park.

But as Vancouver's tree canopy shrinks in the face of furious development (as reported earlier in The Tyee), this is ground zero for the city's effort to offset habitat lost elsewhere to bulldozers and chainsaws.

David Yule, a long-time park volunteer, knows restoring Everett Crowley is a big challenge. "It's the most invasive weed on the planet," he says, yanking at the fast-growing knotweed pushing up through old cement blocks.

The 38-hectare park, the fifth largest in the city, slopes down towards the Fraser River. Like most of Vancouver, it was once ancient old growth forest. Salmon used to swim up Kinross Creek that flowed through a ravine shaded by giant cedars and hemlocks.

The trees were cut and carted away decades ago and the Kerr Road Dump opened in 1944 as the city's main landfill. The ravine was filled with trash -- 49 metres deep in some spots -- and covered with fill when the dump closed in 1966.

"It was barren," recalls Yule, who grew up nearby and played in the dump as a boy.

Now, as Yule explains in this video, the long buried debris of Vancouver civilization -- chunks of cement, pieces of appliances -- regularly migrate their way to the leafy surface, as if to remind what lies below.

Over the years, the space greened up. Seeds blew in on the wind and aspens and cottonwoods took hold. Blackberries and knotweed were not far behind.

The Champlain Heights community convinced the city to turn the land into a park in 1987, and set to work to create an "urban wilderness."

Today a grassy meadow that doubles as an outdoor classroom grows on top of the pit where tar was dumped for decades; and trees surround Avalon Pond, which used to be a quarry for gravel used to build and repair Vancouver's streets. "A few weeks ago I counted 150 ducks in here," says Yule, looking out over the lake.

There is also a new Kinross Creek flowing out of the pond. The original creek and its waterfall remain in their trashy grave, so polluted the water "is piped directly to Annacis [Island Wastewater Treatment Plant]," says Yule, former president of the Champlain Heights Community Association, which has been working to restore the park for decades.

Some of the community's ambitious "rewilding" ideas have yet to take off -- such as a plan to "daylight" the new Kinross Creek all the way to the Fraser River through the River District development taking shape below the park, says Yule. But he says the park board's renewed interest in "rewilding" Everett Crowley has "been a breath of fresh air."

The reforestation is part of the park board's effort to counter the decline of Vancouver's urban forest. According to city reports, the tree canopy has shrunk by about 400 hectares in the last two decades due to rampant development and tree removal -- an area the size of Stanley Park.

The park board's new biodiversity strategy, unveiled early this year, includes a commitment to "restore or enhance" 25 hectares of "natural" area across the city by 2020. The biggest chunk -- nine hectares -- is in Everett Crowley.

So far about 3,500 young cedars, firs, maples and other native trees have been planted in the park along with native plum, berries and ferns that add layers of life to the understory. About 7,200 more trees are to be planted by 2020, says Nick Page, the park board biologist who has teamed up with the community for the project.

City crews are also hauling in stumps and logs to help attract wildlife, such as the snakes recently spotted slithering through the park. They may also erect a few snags to attract birds and other wildlife. "Though we don't want to drill too deep," says Page, alluding to the garbage below.

The old landfill was capped with a thick layer of soil, but in some areas methane continues to rise from the deep stunting trees, withering grass and melting snow. As for potential hazards, Page says, "we haven't observed any problems with contamination in the areas we have targeted for forest restoration. But we haven't tested contaminant levels in vegetation."

The priority now is the weeds choking 35 to 40 per cent of the park.

"This stuff grows faster than bamboo," says Yule, wading into the knotweed that will be three metres high by July. He and other volunteers have hacked away at it for years but, invariably, the weeds grew back.

The park board has stepped up the assault bringing in machinery to clear the blackberry and knotweed. It has also hired the Invasive Species Council of Metro Vancouver to treat the worst infestations of Japanese knotweed with the herbicide glyphosate, also known as Roundup. "None of our other strategies (digging, mulching, mowing, etc.) have been effective for knotweed control," says Page.

Success of the restoration project will depend largely on continued weed control -- and how one defines "rewilding" and "harmony with nature."

As Yule points out the original Kinross Creek and ravine are long gone. So are the ruffed grouse, yellow-billed cuckoos, elk, wolves, cougars and bears that used to live in Vancouver.

But he can envision the new forest. "In 20 years this will be a coniferous forest, and you'll be able to sit here and see right down to the river," says Yule, gazing out over the new conifers and native shrubs that appear to be thriving.

Page, leaning on his shovel at this spring's community tree planting event, says he'll consider the project a success when the Douglas squirrel shows up at Everett Crowley. "That's my measure of forest restoration success," he says, noting how the diminutive brown squirrels are an indicator of healthy coastal forest ecosystems.

Douglas squirrels, about half the size of invasive eastern gray squirrels now running around Vancouver, gather and disperse seeds and micro-organisms in coniferous forests and also attract owls and hawks that like to swoop down and grab them.